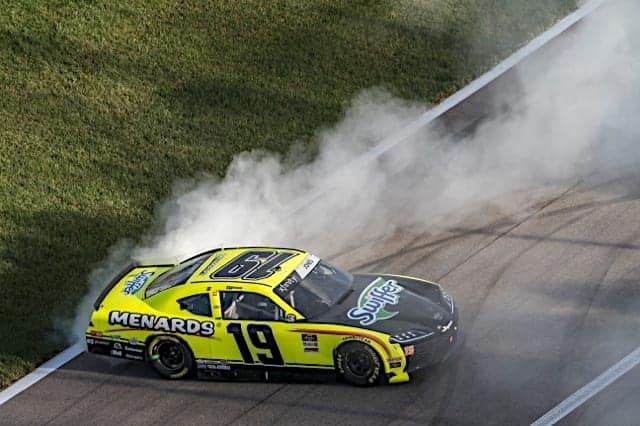 It was another hot day for the NASCAR Xfinity Series at Kansas Speedway Saturday (July 25). Though the action was cool for much of the Kansas Lottery 250, some varying pit strategies and late cautions heated up the competition at the end.

Austin Cindric looked like he would tie the late Sam Ard’s Xfinity record of four consecutive victories, but two late-race cautions and a brush against the wall allowed for others to contend for the lead. On the final green-white-checkered restart, Brandon Jones quickly made his way up from seventh to battle Cindric on the last lap and win the race.

Jones won his second race of the year and second in a row at Kansas. The No. 19 Toyota Supra driver stayed within the top 10 all afternoon and made the right moves at the right time.

It was a strong day for the entire JGR stable that was much-needed. Though the organization looked to have three cars in the top 10 last week at Texas Motor Speedway, Kyle Busch‘s disqualification put two cars at the back along with the wrecked Riley Herbst. The full-time Xfinity drivers had issues since the Homestead-Miami Speedway doubleheader but turned their luck around at Kansas.

On the final round of green-flag pit stops, Sieg stayed out as long as he could, hoping for a caution. Though he didn’t get it right away, it did allow Cindric’s car to be further back in the field, affecting the car’s handling. Cindric retook the lead once Sieg pitted, but Burton quickly closed in. Burton ended up taking some air off of Cindric’s No. 22 Ford off turn two and Cindric tagged the wall, allowing Burton to grab the lead.

Though Burton ultimately ended third, it was a strong performance from the rookie. Herbst also had a good run with a ninth-place result.

And while Cindric did end up getting into the wall and surrendering the lead, he still had another dominating day at a “cookie-cutter” track. Cindric won both stages, led 131 of 175 laps, and has led 346 laps in just the past four races. If he keeps performing like this in the fall, he’ll be one to reckon with in the playoffs.

Kaz Grala had a good run but not a good ending as he sped on pit road on his final stop and had to serve a pass-through penalty. Still, finishing 13th since his last Xfinity race in August 2019 was pretty impressive.

After securing the final stage point in the second segment, Noah Gragson looked like he would have a solid day. Unfortunately, a pit-road penalty on the final stop left him out of the top 10 en route to a 15th-place finish.

Justin Haley and Myatt Snider didn’t necessarily have bad results, but both rebounded from bad starts. Haley began the day with radio trouble, and even came down pit road to switch them out. While it was quite difficult during the race, the team figured out a way to communicate using the radio channel. Haley indicated whether he was too loose or too tight by how long he pressed the button to key his microphone. It seemed to work, as he ended up sixth, just behind his Kaulig Racing teammate Chastain.

Meanwhile, Snider’s No. 93 of RSS Racing shut off during the pace laps, which put him behind from the start. However, the team quickly got it going again and sent him back out. Thanks to his speed and the attrition on the track, Snider ended up 22nd. He’s still on the outside of the playoff cutline, but he and team salvaged what could have been a disaster.

It was a disappointing day for Brett Moffitt, who finished second in Friday’s (July 24) Gander RV & Outdoors Truck Series race. After incurring an uncontrolled tire penalty during the stage two caution period, Moffitt’s day quickly went from bad to worse. He had an oil leak that brought out smoke from his car, ending his run. Moffitt’s No. 02 of Our Motorsports has one top five, three top 10s and 11 top 20s this season, but this was definitely a setback. Sports car veteran Andy Lally will compete in the next two events for the organization, both at road courses.

The other ugly part of the race (and really this weekend) was the heat and its affect on the drivers. The temperature in Chastain’s racecar exceeded 110 degrees Fahrenheit before the halfway point.

112 degrees inside the No. 10 @KauligRacing Chevrolet of @RossChastain at @kansasspeedway & there are about 100 laps left to go in this @NASCAR_Xfinity race.

It was certainly a hot one. Several drivers were treated at the infield care center after last night’s truck race, and it looked like more drivers needed assistance after this exhausting event.

It was avery hot day in Kansas. @RyanVargas_23 is headed to the infield care center for precautionary measure. He is okay, but wants fluids in his system. #TeamJDM | #NASCAR | #XfinitySeries pic.twitter.com/HxTShLUvMo

Sieg’s strategy to elongate the pit window didn’t seem like it would pay off until Joe Graf Jr. hit the wall on lap 164 to bringing out the caution. Heading into overtime, Sieg stayed out while other leaders pitted, inheriting the top spot. Though he dropped back on the first green-white-checkered, the caution came out again before the white flag waved, allowing Sieg to try again. He held strong in fourth place the second time around, securing his first top five since Auto Club Speedway in March.

“We’re never out of this thing, that’s what I love about these guys. We keep our head in the game, we don’t get excited during these races. We continue to make changes. My feedback I think was pretty good. It’s been a long two days, I feel exhausted and obviously the heat is big here. Looking forward to celebrating with these guys and it feels great to be back in victory lane.” – Brandon Jones

“Well, I think to give credit where credit is due, Harrison Burton was the fastest guy today. He run me down twice under green flag, and I hate for him to lose it like that, but that’s racing, there’s going to be late-race cautions. Brandon did everything right, I probably got too caught up in trying to clear the (No.) 39, not focus on the runs. The dude jumped the restart zone by two car lengths, which was a bit unfortunate. Congrats to Brandon and Menards, he’s had a tough run lately so good to see that. Great points day for us, really wanted to get four in a row, really wanted to get Xpel… in victory lane.” – Austin Cindric

JGR needed a great day, and they got it Saturday (July 25). Call it luck, skill, or maybe a bit of both, but Jones found a way to defend the race title when it really counted. Cindric’s commanding performance is not one to be ignored, though.

Though the race did have two restarts for stages one and two, once the field got spread out there wasn’t a whole lot of action on track. However, once the final cycle of green-flag pit stops got underway, strategies and spins created quite the scenario. It goes to show you never really know who will win in the end.

After an off week, the Xfinity Series goes road course racing at Road America, another track where Cindric excels. The Henry 180 airs Saturday, Aug. 8 at 12 p.m. ET on NBC Sports Network.