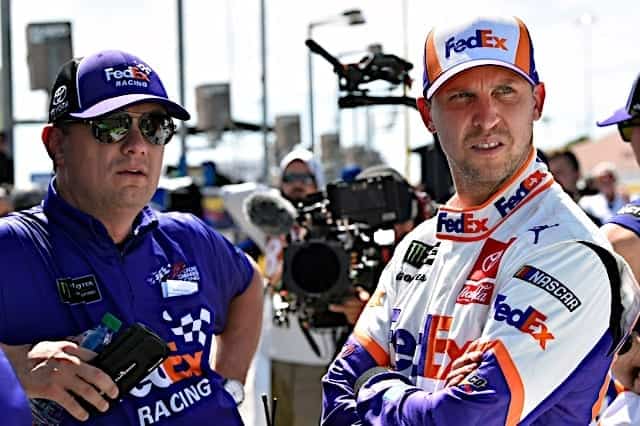 The success of Denny Hamlin and crew chief Chris Gabehart is far from new at this point.

The duo’s victory at Kansas Speedway on Thursday (July 23) marked their fifth of 2020 and 11th since partnering at the beginning of the 2019 season. To see Hamlin at the front of the field anymore is like seeing the grass is green – you expect it by now.

But just because the No. 11 Toyota team is making its winning ways appear normal doesn’t mean they are. What this pairing has accomplished in only 52 races together is astounding. And that 52-race total doesn’t include the four races Gabehart was suspended this spring but does include Gabehart’s 2017 debut when filling in for Michael Wheeler when Hamlin finished fifth at Richmond.

Both parties deserve credit for the statistics they’re posting together.

Hamlin and Gabehart have won 11 races or 21.2% of their 52 races. In other words, they’re winning better than one out of every five races. Perhaps more impressively, they have not been hindered by a particular track type, nor does a particular track type favor them. The team has collected wins at all different tracks except a road course: one victory at a short track (Bristol 2, 2019), one at a 1-mile track (Phoenix 2, 2019), five at intermediate tracks and four at tracks larger than two miles, including two Daytona 500s. In their three road-course races together last season, Hamlin finished fifth at Sonoma Raceway, third at Watkins Glen International, and 19th at the Charlotte Motor Speedway ROVAL.

Versatility like that is what drivers and teams strive for week in and week out. And with the exception of Kevin Harvick and crew chief Rodney Childers, no other team has managed to match the bar of success the No. 11 Joe Gibbs Racing team has set in 2020.

“I think it really boils down to trust,” Hamlin said. “I do my job, he does his. I don’t venture into his department, he doesn’t really venture into mine. He knows I’ve been doing this long enough when I give him the information I need to make my car faster, he just goes to work on it. He doesn’t try to change how I’m driving to adapt to maybe what someone else is doing.

“He works on the car to get it where I need it. That relationship really works well. We’re building a notebook. That notebook is getting thicker and thicker. The knowledge is getting greater and greater. That’s why you’re seeing the results you’re seeing.”

Gabehart provides Hamlin with exceptional vehicles fit to the driver’s capabilities, another key component as the pair establishes itself as an enormous threat for a title run.

“I think it’s, in general, attention to detail, I guess is the best way to say it,” Gabehart said. “I’m very much a person that, like so many of these guys we race against, I just try to get all the water out of the rag every week, whether it’s setup or pit strategy, working with my guys, getting Denny’s frame of mind where it needs to be for what the game plan is for that weekend.

“He’s very much the same. He’s very methodical. He tells you, right? He tells you he’s thinking at the very top of his game right now. I think that’s always been one of his strengths. I think you put those two things together, I think we get a lot of the details right. We certainly don’t get them all right – nobody does – but I think we work hard to get a lot of the details right.”

The numbers are astounding. While wins always take precedent, Hamlin’s average finish since the start of 2019 is 10.3, a stat bettered only by Harvick’s 8.25. The FedEx crew has also garnered 35 top-10 finishes in that time frame, 29 of those resulting in top fives.

Hamlin and Gabehart have only been on track together for the past 17 months. To say they are an all-time duo yet feels premature.

Gabehart refuses to be put in the same category as the pairing of Jimmie Johnson and Chad Knaus, reasonably so considering the absurd consistency and dominance the No. 48 Hendrick Motorsports team flexed for a decade and a half.

If Knaus and Johnson are the bar, and a couple other pairings like Ray Evernham and Jeff Gordon as well as Dale Inman and Richard Petty are in that tier, Gabehart conceded his sights are set at the longevity of what some of his modern-day peers have strung together throughout the past six years.

“I look at Rodney and Kevin, they’ve had lots of sustainability,” Gabehart said. “Adam (Stevens) and Kyle (Busch) have had years of success together. I think for us, again, all I can say is it’s about the process. Right now the 11 team, we have that figured out to where if we execute to our ability every week we’re going to have a shot to win. Hopefully, that doesn’t change any time soon.”

Sure, we haven’t even seen Hamlin and Gabehart complete two seasons together. But is it really too early to think they could be one of the all-time great duos as a driver/crew chief combination?

“Statistics would say that we are so far,” Hamlin said. “I would like to keep it going for many, many years past just these last two. Yeah, we’ve got something special going for sure. We don’t want to mess it up.”

Remember when Denny use to say that after a victory.