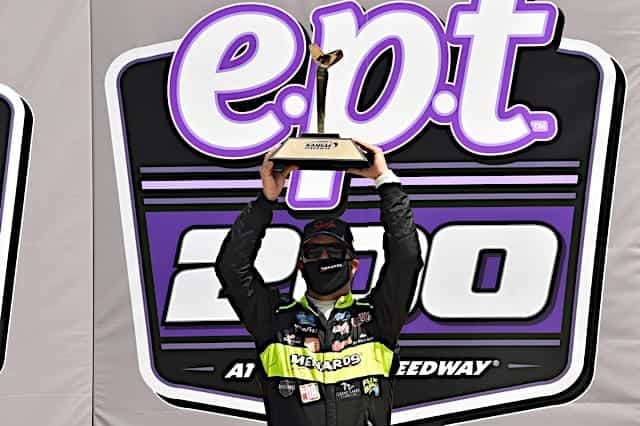 In a Nutshell: For the first time in NASCAR Gander RV & Outdoors Series history, drivers hit Kansas Speedway for a pair of races less than 24 hours apart. Friday night (July 24),

Austin Hill emerged victorious for his first win of 2020. He easily beat out Brett Moffitt by nearly three seconds in a dominant race that saw Hill lead a race-high 65 of 134 laps.

Two things will never get old.

Fast forward to Saturday afternoon (July 25) and it was Crafton who broke a 67-race winless streak to score his first victory since Eldora Speedway in 2017. He narrowly beat Christian Eckes by a slim 0.324-second margin to the checkered flag. Enfinger, Tanner Gray and Ben Rhodes rounded out the top five.

Friday night’s race saw ThorSport Racing put all four of its drivers inside the top 10 for the first time all season. In a year where Enfinger won the season opener at Daytona International Speedway and snagged a second victory at Atlanta Motor Speedway, the organization had been unable to have all of its trucks finishing well in the same race.

That ended in the Blue-Emu Maximum Pain Relief 200 on Friday night when Enfinger finished third, followed by Crafton in fourth. Rhodes and Johnny Sauter finished seventh and ninth, respectively.

Crafton’s victory in Saturday’s E.P.T. 200 marked the third for the organization in 10 races this season, and Enfinger ended up with another third-place finish. It marked the No. 98 team’s third straight top 10 after going through the first seven events with the two victories standings as the only two top-10 results.

Meanwhile, Rhodes’ fifth-place finish marked his fifth straight top 10 and his eighth in 10 races this season. Sauter, though, wasn’t as fortunate on Saturday. He was caught up in the big wreck that brought out the sixth caution and a brief red flag for cleanup.

A big crash entering the corner collects multiple contenders including @JohnnySauter, @StewartFriesen and others! pic.twitter.com/uBPLwuvGV1

The wreck and subsequent DNF erased any good Friday’s ninth-place run did for the No. 13 team. In fact, Sauter now sits 43 points below the playoff cut line with only six races remaining.

Tyler Ankrum, who’s struggled to find any kind of consistency throughout his sophomore season, would probably like to forget about the Kansas double-header weekend that saw him drop from eighth to 11th in the playoff standings.

His troubles began early Friday with a flat right-rear tire that had to be serviced with an unscheduled green-flag pit stop. To make matters worse, that flat repeated itself and took out a brake line along the way, sending Ankrum to the garage for extended repairs. Though he was able to get back out on the track and posted lap times similar to the leaders, the damage was done and he was left to settle for a 33rd-place finish, 22 laps down.

Fast forward to Saturday when Ankrum had to start 33rd, thanks to his results on Friday and he was able to race into the top five by stage two. Showing the kind of speed the No. 26 Chevrolet and GMS Racing as a whole has shown all season, it looked like Ankrum might still be able to make something out of the weekend.

But as he and teammates Zane Smith and Moffitt ended up running three wide, the trio tangled, taking Ankrum and Moffitt out on the spot.

"… and that's all she wrote." pic.twitter.com/oTWnHCBjUA

Smith was able to continue for a top-10 finish, but Moffitt and Ankrum finished 27th and 28th, respectively, bringing Ankrum’s double-header average finish to a disappointing 30.5.

The good news for Ankrum, though, is that he did have plenty of speed to contend, though the finishes have hardly been indicative of what the truck has been able to run throughout the races. With just three top 10s and an average finish of 16th in 10 races, you can bet Ankrum and his crew chief will spend their off-week looking at ways to finish the race where they’ve been running.

Hate this for @GMSRacingLLC was trying to give the 23 room coming on the top and looked like the 26 got tight and I just got squeezed and ran outa room. https://t.co/eMxpXRcLne

A spin out of @TravisPastrana!

The @NieceMotorsport machine goes for a slide early in the final stage. #EPT200 pic.twitter.com/r4fVNGh6v8

Number of Rookies in Race 1: 8

Rookie of the Race in Race 1: Kraus

Number of Rookies in Race 2: 8

Rookie of the Race in Race 2: Eckes

Points Update: Hill remains as the point leader by 43 over Rhodes. Rookies Eckes and Smith are tied for third, both 50 markers behind the leader. Moffitt, despite his DNF in the second Kansas race, rounds out the top five. Crafton’s third-place result Friday, combined with Saturday’s win has propelled him to sixth, just a single point ahead of teammate Enfinger. Creed, Kraus and Todd Gilliland round out the top 10.

The gap below the playoff cut line has expanded just a bit with only six races remaining to set this year’s championship contenders. Ankrum is 11th, 22 points back, while Sauter sits 12th, 43 markers below the cut line. Gray, Stewart Friesen and Raphael Lessard round out the top 15.

“It's all about these guys. I can't be happy enough for them, Duke and Rhonda Thorson, @Menards, and everybody that always believed in us." pic.twitter.com/xs0tg14WK5

Good weekend for everyone at @Hattori_Racing we fought really loose all day today but Scott and the guys made our @UnitedRentals @ToyotaRacing tundra way better throughout the race. Was surprised at how much the track changed. Still a solid weekend! P6 today. #TeamToyota

Good points day. Scored 2 stage wins, Just got settled back and missed it in the final stage. Ours will come. Keep on workin hard appreciate ya @GMSRacingLLC, Onto @MISpeedway.

Not a good race whatsoever, P13. We have a lot of work to do for tomorrow but I’m confident in our @safelite @KBMteam to get it right!

Well my guys made all the right changes to give me an awesome truck today, got loose passing for the lead and pounded the fence, trucks are good just need to minimize my mistakes. Thanks team! @GMSRacingLLC @TeamChevy

Up Next: The Truck Series takes a weekend off before heading to Michigan International Speedway on Friday, Aug. 7. Race coverage begins at 6 p.m. ET on FOX Sports 1; the race can also be heard on your local MRN affiliate or SiriusXM NASCAR Channel 90.