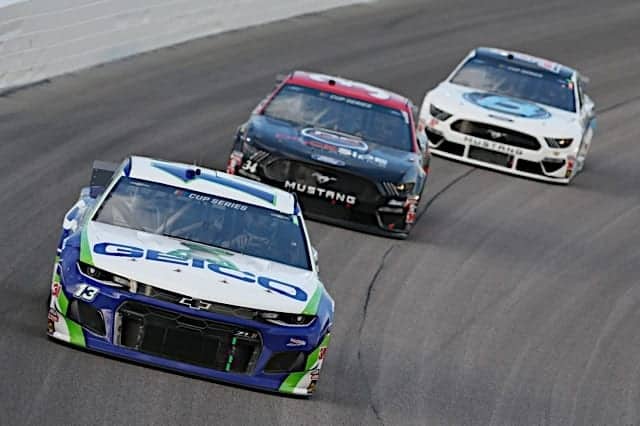 Underdog teams face a lot of adversity and need to be resilient to overcome their long odds. Ty Dillon did just that, rebounding from his third DNF of 2020 last weekend at Texas to claim the top underdog spot in Thursday night’s race at the Kansas Speedway. Dillon was steady throughout the evening and was rewarded with a 15th-place finish.

In the past four events, Dillon has finishes of 14th, 15th and 16th to ease the sting of the forgettable outing in Fort Worth. He also continued his trend of moving up from a low starting position, as Dillon took the green flag in 36th spot. I’m not sure if he’s gained more positions from start to finish than anyone else in 2020, but he’s got to be close to the top of that list.

“My GEICO guys fought for it tonight. We had a rough start to the race, but we never stopped chipping away at it. Everyone on this Germain Racing team kept digging, (crew chief Matt Borland) made our Camaro ZL1 1LE better with adjustments and we brought home another top-15 finish. This is our third top-16 finish in four races, and I’m proud of our team for working hard. We will look to keep this momentum rolling in Loudon.”

Michael McDowell has been the highest finishing underdog a lot in 2020, and even when he isn’t, it seems as though he’s the next best. That was the case again in Kansas, as McDowell followed Dillon across the stripe to finish 16th in Thursday night’s race.

Similarly, his teammate John Hunter Nemechek has spent a lot of time in our spotlight. The rookie had another solid run last week, placing 19th at the checkered flag.

The Xfinity Series was the weekend finale for the first time when racing at the same track as the Cup Series. Well, inclement weather has forced such a situation a few times, but this was the first time NASCAR ever planned it that way. Ryan Sieg came about as close as he ever has to scoring his first career win. Sieg led 25 laps and was in front when the field took the green on the final restart. Even though he was passed by three cars over the final two laps, it was a banner day for the No. 39 team. The notion of Sieg winning a race has transformed from possible to seemingly inevitable. Brandon Brown had another solid effort, finishing 11th, one spot ahead of Jeremy Clements in 12th.

In another first, the NASCAR Gander RV & Outdoors Truck Series teams had its first ever weekend doubleheader, featuring races on both Friday night and Saturday afternoon. Friday night’s opener earned Derek Kraus his second career top five, as the Wisconsin native rounded out the event in fifth place. Brennan Poole was the lone other underdog competitor in the top half of the field, finishing 12th.

The second race saw Kraus land in the seventh position at the conclusion. Poole was 12th for the second time in less than 24 hours, Austin Wayne Self 13th, Spencer Davis finished 14th and, after starting 30th, Jordan Anderson claimed the 15th spot in the final rundown.

The NASCAR Cup Series teams all head to New Hampshire Motor Speedway this week. While technically not a short track by definition, NHMS races like one, and the importance of handling over speed gives the underdog contingent more of a fighting chance. The Front Row Motorsports teammates of McDowell and Nemechek should be top-20 contenders again this week. I’d also bet on Dillon adding to the pile of finishes in the teens that he has built up.

The NASCAR Xfinity Series and Gander Outdoors Truck Series are both off this weekend.

AWESOME night for our team last night for the Be A Hero 30 at @HawkeyeDowns ! Started 9th and got the Win! And 14 year old teammate Jasec Holladay got 2nd! Big thanks to everyone that came out and helped us raise a ton of awareness for organ donation!@iowadonor pic.twitter.com/NdqoinLi8G

.@KyleWeatherman coming to pit road, crew will take left side rear tire off, they are changing battery after car started running rough, "anyone charge the battery during the week?"

YO!!! I get to race with one of my all time heroes?! How freaking awesome. @TravisPastrana ??? https://t.co/bsMHJBxhh3

It should be Spencer Davis finishing 14th in the Truck race on Saturday.

Pop Pop, just put the two grandsons together in the 3 & 8. Just think how much TV time you will get in pre-race coverage and a whole new income from merchandising.