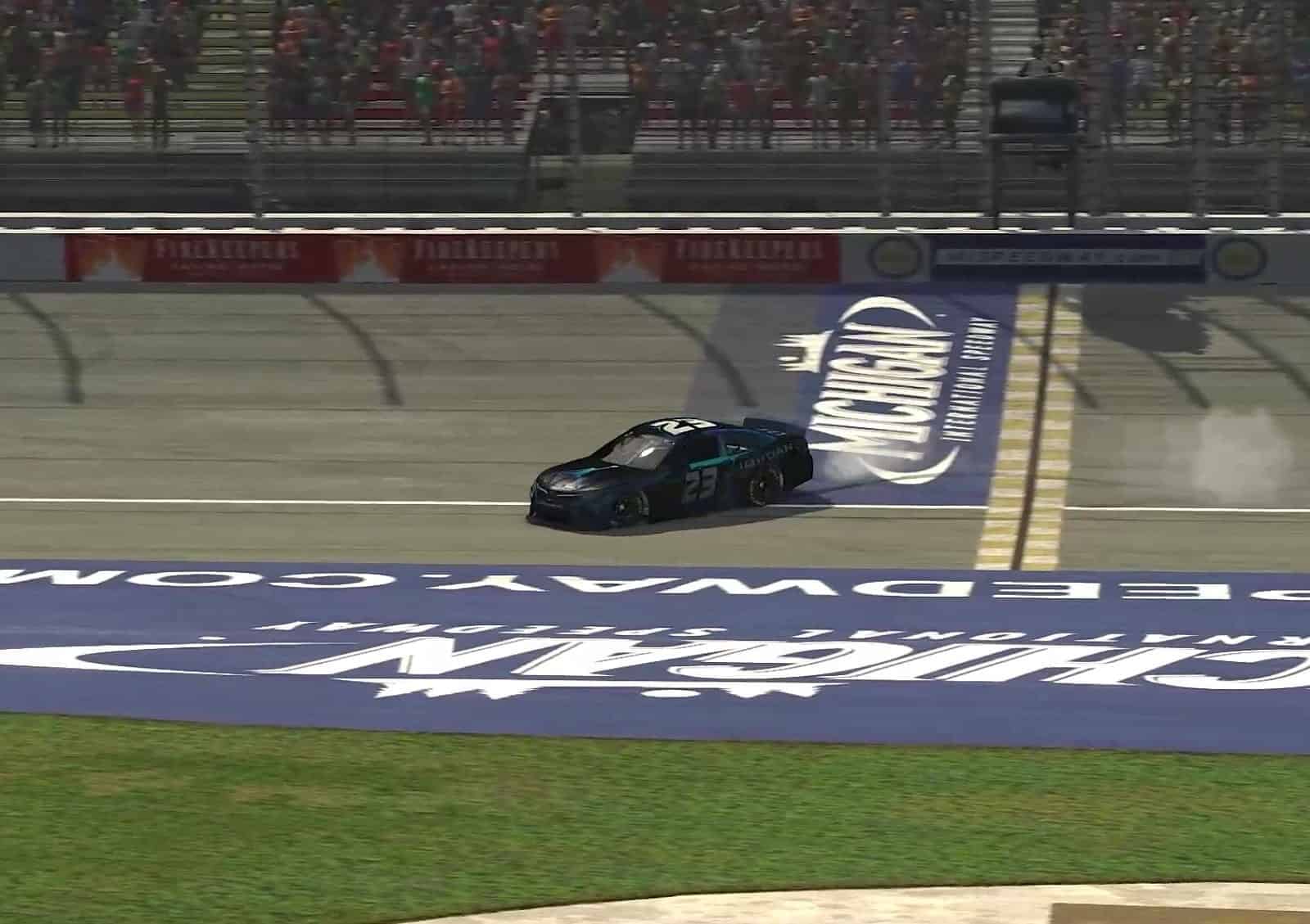 Before the eNASCAR Coca-Cola iRacing Series dropped the green flag at virtual Michigan International Speedway, the broadcast team noted how the package made it similar to a superspeedway. The drafting and tight packs looked like it all night, but the expected chaos only materialized at the very end of the race. It took two overtimes to settle, but Denny Hamlin Racing’s Casey Kirwan was in front when it mattered, claiming his second career series victory and first of 2020.

Kirwan could have been forgiven for thinking he may have won the race in regulation. After dueling four-time series champion Ray Alfalla for several thrilling laps, Kirwan got his No. 23 Toyota in front with less than two laps to go. But a caution for a single-car incident involving Phil Diaz — only the second of the night — kept him from taking the white flag and ushered in the first ever overtime attempt for the series at MIS.

It came ever so close to being the only one needed. Though most of the field needed to pit for gas and tires at the start of overtime, several drivers, including Kollin Kiester and Alex McCollum, stayed out. It was McCollum who found himself in front within sight of the start-finish line, but a huge wreck broke out that sent the cars of Garrett Lowe and Justin Bolton flying through the air, necessitating a second attempt at a green-white-checkered finish.

The leader did NOT take the white flag yet, meaning we have an Overtime finish coming up: https://t.co/pKBfkg6Ln4 pic.twitter.com/t5QIjeIOV9

A fierce battle between McCollum, Kirwan and Alfalla saw the No. 23 barely in front for the white flag, and Kirwan was able to scoot safely ahead on the final lap and see the checkered flag as a post-race pile-up brought an appropriate end to the event. McCollum officially finished second and Alfalla third, with pole-sitter Chris Shearburn and Christian Challiner rounding out the top five.

McCollum’s runner-up result was a career-best, and given his lack of experience leading Coca-Cola iRacing Series races, did not sound too disappointed about coming so close to earning his first trophy.

“I’ve never been up front, so I didn’t know what the strategy was, but I’m just very grateful where I finished,” McCollum said. “This race was very intense. I came with about five laps practice … had no idea what I was doing. I don’t even know what to say right now.”

With teammate Keegan Leahy having already claimed two victories for Denny Hamlin Racing this season, Kirwan now has broken through with one of his own. His reaction after the race was an understandable mixture of jubilation and relief.

“It’s unbelievable, man,” he said. “The start of the year was so rough for me, and I just felt like I was letting so many people down. Denny and the Jordan Brand put so much into this, and into me and Keegan. Keegan’s been absolutely carrying me. It’s time to start pulling my own weight, and we’re finally starting to do that these past couple weeks.”

The eNASCAR Coca-Cola iRacing Series makes its next stop at the Daytona Road Course on Aug. 11, a change from the originally scheduled visit to Watkins Glen that mimics the real world NASCAR schedule. Coverage begins at 9:00 p.m. ET on eNASCAR.com and multiple streaming channels.