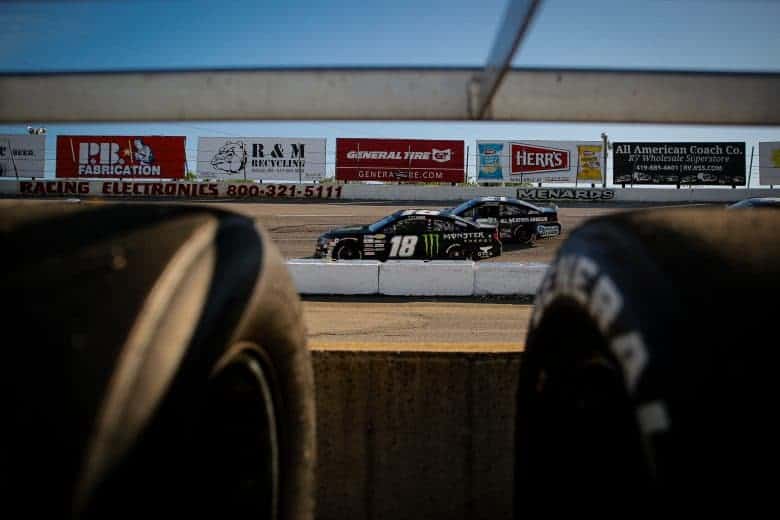 COVID-19 has given Toledo Speedway a chance to be back in the spotlight, once again. The ARCA Menards Series has competed a Toledo Speedway dating back to 1984, and this weekend, it’ll be races No. 48 and 49 for the series.

It’s a double dose of Toledo as ARCA returns home this weekend. When the initial 2020 schedule was revealed, Toledo was missing despite being a schedule staple from 1996 to 2019. But when COVID-19 stepped in, Elko and Mid-Ohio were clipped from the schedule, giving Toledo an opportunity to continue its streak.

This weekend will feature the Menards.com 200 Presented by SPxE on Friday (July 31) and the Menards 200 Presented by Crosley Brands on Saturday (Aug. 1), serving as the next two rounds of the Sioux Chief Showdown. Chandler Smith currently leads the points standings by 10 points over Michael Self. Ty Gibbs sits third while Sam Mayer and Kansas winner Bret Holmes rounds out the top five. Smith won the opening two rounds at Phoenix and Lucas Oil Raceway while Gibbs earned the victory the last time out at Iowa. Saturday’s race will mark the halfway point in the ARCA Menards Series season. Self leads the ARCA Menards Series standings by nine points over Holmes.

The two victors in the three Sioux Chief Showdown events have had success at Toledo in the last two events there. Gibbs earned his second ARCA East Series victory in its return to action after COVID-19. Smith tallied the victory in last season’s Sioux Chief PowerPEX 200 ARCA Menards Series event at Toledo with Gibbs finishing runner-up. Toledo is just the next track to witness these two go to battle for the Sioux Chief Showdown championship.

Venturini Motorsports has tallied three victories at Toledo in 2019 (Smith), 2015 (Todd Gilliland) and 2014 (Justin Boston). Self and Smith have a combined three starts at Toledo while Drew Dollar has zero starts at the track in Ohio. Self has a nine-point lead in the ARCA Menards Series standings after Holmes dominated in Kansas. Dollar sits third, 34 points back.The Toyotas of Venturini will look to kick their streak back into gear after it came to an end last weekend with the Holmes victory.

Last weekend at Kansas, the No. 18 car was lacking with Riley Herbst. The Joe Gibbs Racing short track program has been truly something this season, and it has Gibbs sitting third in Sioux Chief Showdown standings. As noted above, Gibbs won the last time out at Toledo in the ARCA East race. Gibbs has finished top five in every race this season except Indianapolis, where an engine issue pushed them behind the wall. Gibbs will look to earn his sixth career ARCA Menards Series victory.

Believe it or not, Mayer has gone 0-15 in the ARCA Menards Series. Mayer earned his third runner-up finish in the last Sioux Chief Showdown event at Iowa Speedway and finished second to Gibbs earlier this year in the ARCA East event at Toledo. Last season, Mayer finished fifth, which stands as his worst finish in 15 starts. Mayer sits fourth in SCS points standings, 18-points behind. Can he tally his first career victory this weekend in one of the two events?

It took 69 starts for Holmes, but the Alabama driver finally tallied his first career victory and Bret Holmes Racing’s second. He sits in fourth in Sioux Chief Showdown standings after three of the 10 races included, and holds second in ARCA Menards Series points. The East event really set the bar for what the season could become for Holmes, as he finished third in his East Series debut. Still struggling with finishing out the full season, Toledo is where Holmes and the No. 23 team can make a bigger statement. With two events and really double the points, a lot of ground can be made or lost. If Holmes continues the run he’s been on, another victory is only inches away.

DGR-Crosley has stood out in the Sioux Chief Showdown with drivers Taylor Gray and Hailie Deegan. Gray returns to action after his brother finished fifth at Kansas, just his second top five of 2020. Taylor will be attempting to earn his third top five in his ARCA Menards Series career. Gray finished eighth in his sole ARCA East start in Toledo. Gray currently sits 10th in SCS standings, 47 points behind. He missed the initial event at Phoenix. The last time we were on a short-track like Toledo, Gray about stole the victory in Indianapolis.

Deegan has hit a rough patch in her season, finishing outside the top-10 in two of the last three races since her third-place run in Indianapolis. Dollar and Deegan have been battling hard for the last three weeks, including contact at Kentucky that resulted in Deegan nailing the outside wall. There was almost contact at Kansas but everyone squeaked away with no damage. These three races have put a damper on Deegan’s season as she sits fifth in SCS standings and fourth in ARCA points standings.

The kid from out of nowhere, Derek Griffith, has impressed in the No. 22 car, breathing life in it not seen since Ty Majeski earned multiple victories in it. He’s finished outside the top 10 only once this season and has a best finish of seventh at Kentucky. New Smyrna is the only other track he’s raced at in the ARCA East Series, where he finished second. Griffith is a short track star who could tally the victory in at least one race this weekend.

Giovanni Bromante will make his ARCA Menards Series debut this weekend with Visconti Motorsports in the No. 74 car. Bromante has two career ARCA East Series starts including one at Toledo earlier this season finishing 11th. His only other start came at New Smyrna where he finished fifth in his debut. Bromante highlights one of the only drivers to invade from the ARCA East Series.

Why can’t there be fans for these races ?