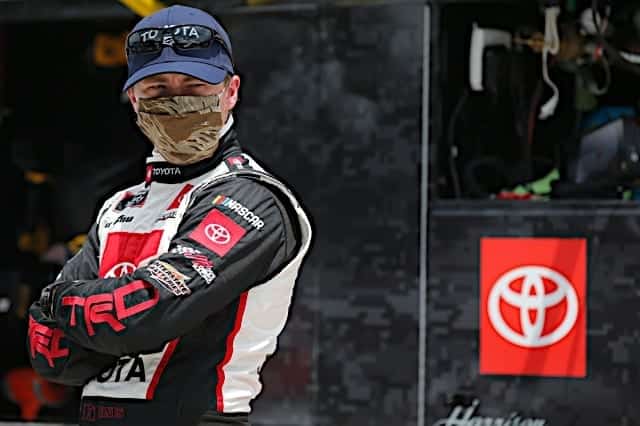 Can a 15-year-old really lead a NASCAR championship? Can a 23-year-old have veteran driver status? Can a 27-year-old be a NASCAR team owner?

If age is just a number, why do we talk about it so much?

In recent years, NASCAR has consistently billed races with a youth verses veteran mantra as day to day storylines. We see it throughout all three of its national series. As advertised, young guns like Chase Elliott and Tyler Reddick go clash with the grizzled veterans every single week in the NASCAR Cup Series. What about Matt Crafton and Johnny Sauter defending their turf against an onslaught of teens and 20-somethings in the Gander RV & Outdoors Truck Series?

We even saw it just last week in the Xfinity Series, when an intelligent veteran with lots of experience methodically waited for the race to play into his hands. Just like Kevin “The Closer” Harvick so many times before, this guy closed the deal after staying out of trouble and shooting to the front when all the chips were down. It was just another win in the bank for Brandon Jones, who again went to work on those wild, less-experienced guys. It was not flashy. It was not expected. But it was a legitimate win.

If you are not confused by now, you should be. Not only was a comparison made between Jones and Harvick, but how can a driver born in 1997 be a veteran?

Jones is just 23 years old, but he could be mistaken for someone twice his age thanks to his sensible driving style and maturity beyond his years. That sounds about like a veteran, but what about his experience?

Of the 23 full-time NXS drivers, Jones ranks in the top quarter for experience levels, even though he was born during U.S. President Bill Clinton’s second term. Those 23 drivers average approximately three seasons of experience while competing as a full-time driver, including the partial 2020 season so far. Jones’ four full-time NXS seasons sound just above average, but it is greatly distorted thanks to double-digit full-time seasons from Justin Allgaier and Michael Annett.

A closer look reveals that along with Allgaier and Annett, only Ross Chastain, Ryan Sieg and Jeremy Clements have logged more seasons than the sixth-most-experienced Jones.

Comparatively, on the Cup side, the sixth-most-experienced driver (once again, in terms of full-time seasons including 2020) is none other than Kyle Busch.

But if the mark of a veteran is age, experience and past success (at least that’s how many in NASCAR put it), are they really all that different? In their two series, they both get high marks for their experience levels. Both have a winning track record. The only thing that does not match up is age. Does that really even matter?

If we fire up our flux capacitor to 1997, the same year Jones was born, we find three similar drivers to him: Jason Keller, Kevin Lepage and Phil Parsons. All three were competing in their fourth full-time NXS season, the seventh-most of full-time drivers. But age was not a factor. Keller was in his 20s, Lepage his 30s and Parsons his 40s, They were still among the upper echelon of experience if we are dictating the qualities of a so-called veteran.

It was a much different time in 1997, and drivers’ ages have gotten progressively younger since, but some things still remain the same: Age will always be up for debate, but the stats book has a hard time recognizing it.

On the note of experience, remember those 23 drivers mentioned earlier? Well, they average 26 years of age, much lower than 1997 and the overall lowest in series history. The eldest in 2020 is 36-year-old BJ McLeod, who has fewer full seasons under his belt than Jones.

While we churn over that, why don’t we scoot over to the ARCA Menards West Series, where we find a 15-year-old Jesse Love leading its points championship. Huh?

Yes, it is the first time ever that a driver born in 2005 has led a NASCAR regional series, let alone any series of NASCAR. That is pretty remarkable until you realize that every single full-time driver on that circuit was born in this millennium, minus 43-year-old Takuma Koga and 55-year-old Todd Souza.

However, drivers born in or after 2000 are nothing new. Of the 204 drivers who have made a start in at least one of NASCAR’s top three series so far this season, 15 were born after 1999, marking the greatest percentage ever for a single year.

Of that contingent, Harrison Burton, Colin Garrett, Ryan Vargas, Colby Howard, Kody Vanderwal and Carson Ware are all trying to make their mark in Xfinity. After scoring two victories this season, Burton became the first driver born in 2000 to ever lead the points in a national series. However, Burton was not the first driver born in the new millennium to actually grab a victory, because Todd Gilliland beat him after winning a Truck race at Martinsville Speedway last season.

For Garrett, he drives for arguably the most youthful team in the series. His car owner, Sam Hunt, has been slowly climbing his way up the ranks for awhile. At 27 years old, he is by far the youngest in NXS. However, compared to drivers, Hunt, a former competitor in the K&N Pro Series ranks, sits near the middle. Back to the 204 drivers we have seen make an appearance this season, only about 40% are older than Hunt.

1992 and 1997 are actually the two most common years in which current drivers were born, both with 14 drivers actively competing each. In addition, 1992, as well as 1993, set the mark for Cup starters this season, with five apiece.

There are extremes on both sides, however. There is a 50-year age difference between the oldest 2020 starter, 68-year-old Norm Benning, and the youngest, 18-year-old Chandler Smith, both of whom compete in Trucks.

Benning is in the running to make history, too. Every year since 2003, Morgan Shepherd has earned the mark as the oldest competitor to make a start each season. As long as Shepherd does not make a start in 2020, the crown will go to Benning. Dave Marcis was the last driver not named Shepherd to get the nod, after competing in the 2002 Daytona 500.

Marcis’ last Cup win came in 1982, which is also an oddity in itself. Not a single driver that has taken a green flag this season in any of the three series was born in 1982, considering every other year is represented between 1972 and 2002 by those 204 drivers.

While 1982 marked Marcis’ last win, it also saw Harry Gant grab his first. Gant went on to become the oldest victor in Cup history after winning the 1992 Champion Spark Plug 400 at 51 years old. Gant’s record still stands today, but will it ever be in jeopardy? Only one driver has attempted to find out this season: David Starr. At the age of 52, Starr has only challenged it just once, thanks to a single outing at Martinsville. He did not come close.

Finally, back to to Jones. When Jimmie Johnson first entered the sport, he was 23. So too was Denny Hamlin. So too was Martin Truex Jr. At age 23, Jones already has been in NASCAR for seven years dating back to his truck debut in 2013 as a 16-year-old.

So in NASCAR terms, is Jones really that young any more?

It is safe to say that Zach Gillispie has been obsessed with race cars for nearly his entire life. After all, his childhood home was just a stone's throw away from Charlotte Motor Speedway. Since joining Fronstretch in 2018, Zach shares his passion for motorsports with the racing faithful around the country through his unique journalistic voice as one of the site's News Writers. He somehow does it all while juggling duties as a full-time college student, an entrepreneurial businessman and the News Director of a small market radio station.
Previous Driver Vs. Driver: No Title, No Problem — Ricky Rudd Vs. Jeff Burton
Next Fire on Fridays: Richard Petty, Jimmie Johnson Declines Aren’t Comparable