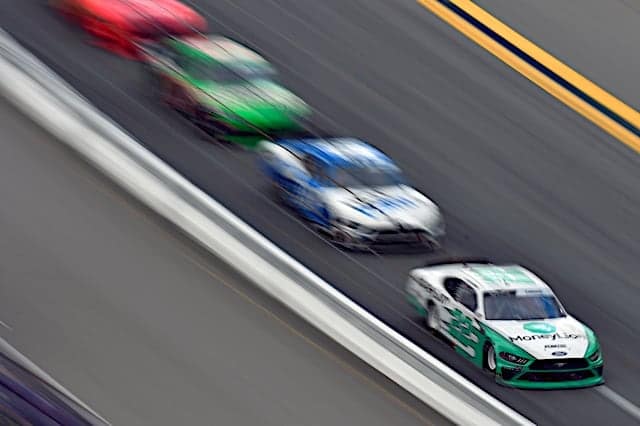 NASCAR made an official statement Thursday, July 30, regarding configurations, procedures and protocol for the race weekend at the Daytona International Speedway road course Aug. 15-16.

Drivers are barred from running more than one race during the weekend, and a chicane will be added off the oval’s turn 4 to slow the cars down entering the tri-oval.

“NASCAR and its OEMs ran several simulations to determine the course layout and engine/aero package for the inaugural NASCAR race on the Daytona International Speedway road course,” NASCAR said in a statement. “Due to the predicted high speeds and loads on the braking system, NASCAR will add a chicane off oval turn 4 at Daytona and move to a high-downforce, 750-horsepower aero/engine package for the NASCAR Cup Series race on Aug. 16. We believe this will combine vehicle performance and safety to provide the best possible road course race for our fans.”

Aside from the additional chicane, the layout is the same as for the IMSA WeatherTech Series’ Rolex 24 Hours of Daytona.

The Cup Series will have the aforementioned high-downforce, 750-horsepower aero package for the race; no tweaked package was announced for the Xfinity or Gander RV & Outdoors Truck series.

As for the Cup Series, NASCAR’s premier division is slated to run 65 laps, with two 15-lap stages to open the race and a 35-lap final segment.

After an ARCA Menards Series race on Aug. 14 at 5 p.m. ET kicks off the weekend, the Xfinity Series will follow on Saturday with a 3 p.m. start time. The Truck and Cup Series will follow with back-to-back races on Sunday at noon and 3 p.m., respectively.

Still doesn’t solve why no practice though!