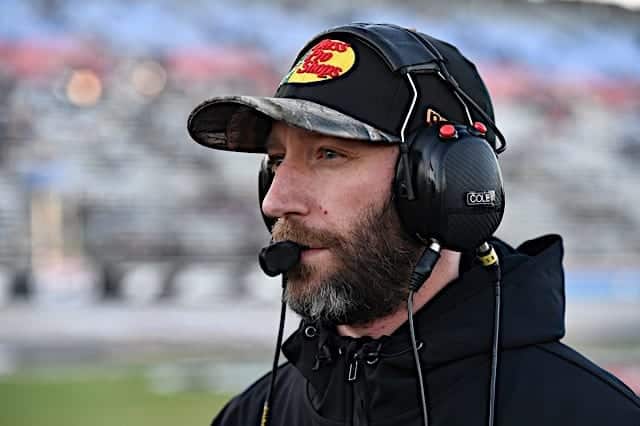 Editor’s Note: This article on Cole Pearn is posted in collaboration with an outside sponsorship client. The opinions and information contained within do not necessarily represent Frontstretch and its staff.

After auto racing, Cole Pearn’s favorite sport is hockey, so he knows all about blockbuster trades. However, the move he’s just made would still be considered a doozy, even by hockey standards.

In 2015, Pearn, a Canadian from Mount Brydges, Ont., made history when he was named crew chief for driver Martin Truex Jr. No Canadian had previously served as a Sprint Cup crew chief on a regular basis.

He added to that legacy in 2017, becoming the first Canadian crew chief to lead a team to victory in NASCAR’s top series when Truex won the title.

Pearn established himself as one of the most successful crew chiefs of modern-era NASCAR history. The Truex-Pearn tandem were always given short odds at top online sports betting sites to come out ahead on NASCAR race days.

And then, it all abruptly ended. In December of last year, Pearn announced he was stepping down as crew chief for Truex, driver of the No. 19 Toyota for Joe Gibbs Racing.

Saying he wanted to spend more time with his wife and children and less time in a NASCAR garage, Pearn and his family purchased Golden Apple Holidays, a skiing and hiking vacation company on the Canadian west coast in British Columbia.

Back Under The Hood

Conor Daly will have Cole Pearn as his lead engineer at the Indianapolis 500.

When the COVID-19 pandemic led to the postponement of the Indianapolis 500 from its usual Memorial Day weekend slot to an Aug. 23 start date, Ed Carpenter Racing found themselves in a bit of a pickle.

Normally a two-car race team with Carpenter and Rinus Veekay at the steering wheels, they’ve added a third car piloted by Conor Daly for the Indianapolis 500. The problem came when the rescheduling of the race created a conflict for the lead engineer originally contracted to set up Daly’s car.

Fortunately, Pete Craik, the lead engineer for ECR, knew a guy who was available, not to mention a pretty fair engineer in his own right. That would be Pearn, who Craik worked with in NASCAR at Furniture Row Racing.

While not interested at this point in time of making a full-time return to racing, the chance to work one of the most prestigious and historic events in the racing game was an opportunity that Pearn wasn’t about to pass up.

“(Craik) called and just said, ‘Would you want to do this?’” Pearn explained to NBCSports.com. “I was like, ‘Yeah, sure.’ They were in a spot where they needed somebody.

“Obviously Indy 500 is a huge deal, so definitely a bucket list item for sure. To get a chance to do it with a great driver and a great team as well, a team I kind of felt comfortable with, was kind of a perfect opportunity.”

Pearn is slated to arrive at Indianapolis Motor Speedway in mid-August to begin the process of setting up Daly’s car, a fact that has the driver excited.

“It’s as if we had hired the alpha of all racing,” Daly told NBCSports.com. “It’s as if Mario Andretti has come to our team and blessed us with his experience and career, some alpha wizard of engineering.

“That’s great. It’s going to be a lot of fun to see what happens.”

In stock car racing, Pearn roared as a lone wolf. Prominent Canadians in NASCAR are as rare as Stanley Cup wins by his favorite NHL team, the Toronto Maple Leafs.

In the NTT IndyCar Series, though, there’s plenty of Canadian connections, so Pearn will feel right at home. James Hinchcliffe, Paul Tracy, Greg Moore, Patrick Carpentier and Scott Goodyear are among the Canadian drivers who’ve enjoyed prominent careers on the circuit.

Working in racing was Pearn’s destiny from a young age.

“I think it was kind of inevitable,” Pearn, whose father Ron raced stock cars at a number of Canadian tracks, told the Windsor Star back in 2015. “At my house, there really wasn’t much else.

“It’s really kind of been the only thing that I can say my whole life I’ve been interested in.”