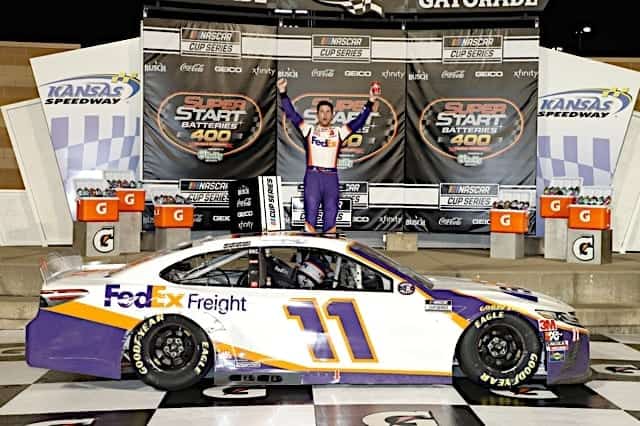 NASCAR Cup Series teams will try to work their magic for your NASCAR DraftKings rosters this weekend at New Hampshire Motor Speedway. The Foxwoods Resort Casino 301 will air Sunday, Aug. 2 at 3 p.m. ET on NBC Sports Network, sparking the sport’s seven-race sprint in August to end the regular season.

The track, known as the “Magic Mile,” is a mostly-flat asphalt oval with minimal banking in the corners. As is the case at short tracks and road courses this season, cars will be equipped with the lower-downforce, high-horsepower package.

But even with a car setup that’s showed promise this season, be prepared to have track position dominate this race. NHMS is typically one of the hardest ovals on the circuit to pass on despite its smaller size. Also note the second stage will be a bit longer than the first, so teams’ pit strategies here will be crucial if they want to win this race.

In four of the past six events at NHMS, at least two drivers led more than 100 laps in each race. The July 2017 event had just one driver who broke the century mark, while 2018 featured several drivers leading 23 laps or more. You’ll likely want to target expected lap leaders, as well as those who can get a top 10 after starting further back, to help you score well on DraftKings.

Before I move onto this week’s picks, here are the results from Kansas Speedway.

As you might recall, Chase Elliott didn’t fit into the Kansas lineup, so I plugged in Matt DiBenedetto. Boy, was that a mistake. DiBenedetto, Austin Dillon and Ryan Blaney all had poor results that night, which sunk the lineup. Elliott, meanwhile, scored 32.5 fantasy points after ending the race in 12th place.

Hamlin proved that he’s one of the hottest drivers on the circuit, winning his fifth race of the season at Kansas Speedway the last time the Cup Series raced (July 23). It helps that he’s carrying that momentum to a New Hampshire track where he led 113 laps en route to a second-place finish one year ago. He beat and banged with Kevin Harvick on the last few laps, but couldn’t quite get his fourth lobster. He did win this race back in 2017, however.

Though all of Hamlin’s 2020 victories have come at tracks longer than one mile in length, he still led 131 laps at Bristol Motor Speedway back in May. While he ended that race 17th, he still scored 67.8 DraftKings points thanks to all those bonuses. The No. 11 Joe Gibbs Racing pilot has 10 top fives and 11 top 10s so far and has an average finish of 10.3. Hamlin also drew the second starting position, so he could lead some laps if he can get around polesitter Aric Almirola.

NHMS could be a track where we see another rookie winner, as Bell flat-out dominated there the last two years in Xfinity. Unfortunately, the freshman has his work cut out for him Sunday as he’s starting all the way back in 35th. The last time someone took first after qualifying in the 30s was in Sept. 2012 when Hamlin led 193 circuits en route to victory. Still, we are in the year 2020, a time it seems where anything is possible. And just last year, DiBenedetto brought Bell’s No. 95 Leavine Family Racing Toyota home in fifth. Even if Bell earns a top 15, that would still give you 49 DraftKings points for your lineup.

Like JGR teammate Hamlin, Busch has also performed well at the Magic Mile. Last year, Busch was the only other driver to lead over 100 laps, though he ultimately ended the race in eighth. In the past eight NHMS events, Busch has two victories, four top fives, six top 10s and has led 668 total laps. One of those wins came in Sept. 2017 where he led 187 circuits after starting from the pole. It’s the same story of success for the entire Gibbs stable, as Martin Truex Jr. also has strong results while Erik Jones was third last July.

This season, Busch hasn’t executed to his standards; he has yet to win a race at the Cup level. But lately, there have been flashes of why he’s the reigning Cup Series champ. Last month, Busch finished fourth at Bristol and earned 95.5 DraftKings points. Last week at Kansas, he looked strong early on and led 52 laps, ultimately falling just short of a top 10 (11th). He did score 61.5 on DraftKings, though.

Could New Hampshire be a place where Busch breaks through? If you think so, plug him into your roster.

Kenseth is another driver who has done well at Loudon in recent years. From 2013-2017, Kenseth nabbed three lobsters, seven top fives and nine top 10s during his tenure at JGR. Although his last win came in 2016, and though he is with Chip Ganassi Racing’s No. 42 now, the 48-year-old could still perform well. At Indianapolis Motor Speedway on 4th of July weekend, Kenseth rallied from 21st to earn a runner-up result, a sign he’s finally starting to gel with his current team.

Kenseth will start 21st again this Sunday and hopes magic strikes again at the Magic Mile for his third top 10 of the season.

It’s been a rough few weeks for JTG Daugherty Racing as Stenhouse continued the last-place streak for the organization at Kansas. This time, it was after a fire in the cockpit ended his day.

But when the car holds together, Stenhouse has showed flashes of strength this year with three top fives, including a second-place finish at Talladega Superspeedway. This week, he’ll start 31st, so unless more mechanical gremlins pop up or he gets into a wreck, the finishing position should markedly improve.

Though Stenhouse only has two top 10s at NHMS, there have been other instances where he gained several positions on the track to finish higher than 20th. These bonus points help boost your DraftKings score and help you cash in your contests. Since his price is so low, a Stenhouse pick means you can fit several top-tier drivers in your lineup.

Dillon avoided all the major incidents at Kansas to come home 15th, a finish which gave him 50.0 DraftKings points. That was the fourth time he’s earned at least 45 fantasy points, a total which is incredible value for his price. For some reason, after that result DraftKings has him at his lowest price since the Coca-Cola 600. I don’t understand it, but I’m taking advantage of it. Dillon does have a pair of 16th-place results at New Hampshire, and with this recent boost of momentum, he could get up there again on Sunday.