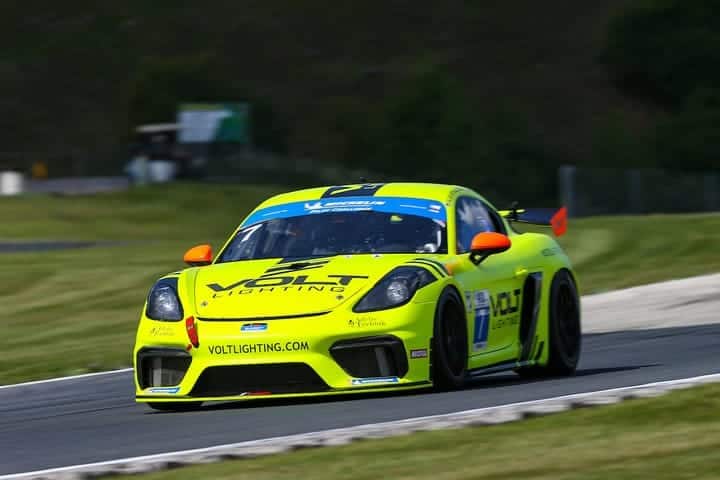 Hindman’s quick lap of the day came only 20 minutes into the session.  It is still more than a half-second off of the best laps from last year, though.

Hindman’s lap was a full eight-tenths of a second faster than CarBahn Motorsports with Peregrine Racing’s Tyler McQuarrie in the No. 39 Audi.  Motorsport in Action’s Corey Lewis was third fastest in his McLaren.  On a different lap, Lewis set the best times in Sector Nos. 1 and 3 on his best lap.  The middle sector was a second and a third slower than Hindman.

Murillo Racing’s Eric Foss was fourth in his Mercedes, while Rebel Rock Racing’s Robin Liddell was fifth in the sole Chevrolet in the field.  Riley Motorsports’ Dylan Murry was sixth, while BGB Motorsports’ Jan Heylen was seventh.  Tom Dyer was eighth in the second CarBahn Audi, while Turner Motorsport’s Bill Auberlen and Multimatic Motorsports’ Sebastian Priaulx rounded out the top 10.

In TCR, JDC-Miller MotorSports’ Stephen Simpson was able to break the stranglehold that Bryan Herta Autosport had on the speed charts in Sebring.  Simpson turned in a lap at 102.832 mph, good enough for 16th overall, to lead the class.

In the mid-afternoon session, Liddell was fastest overall for nearly the entire session.  He set the time to beat early on, then cut a tire and stopped on-course.  This brought out a red flag.

The Chevrolet Camaro GT4.R was not hurt by the tire issue.  On his first lap back at speed, Liddell turned in the fastest lap of the whole session at 106.248 mph.  This lap was three-tenths of a second faster than KohR Motorsports’ Kyle Marcelli in the No. 60 Aston Martin.  Lewis was third fastest, followed by Billy Johnson, who is racing Winward Racing’s No. 4 Mercedes in place of Indy Dontje this weekend.  Hindman ended up fifth quickest.

Heylen was sixth in his Porsche, then Robby Foley in Turner Motorsport’s No. 95 BMW.  McQuarrie was eighth, while Scott Maxwell was ninth.  Team Hardpoint’s Spencer Pumpelly was 10th in his Audi.

TCR saw Bryan Herta Autosport quickest for much of the session.  However, in the closing minutes, Pombo set the quickest lap in the class for Friday with a lap at 103.332 mph, good for 19th fastest.  Pombo’s lap was three-sevenths of a second faster than BHA’s Michael Lewis.  Vance was third in his Audi, then Gabby Chaves in the No. 33 Hyundai.  KMW Motorsports with TMR Engineering’s Tim Lewis Jr. was fifth in the sole Alfa Romeo in the field.

Qualifying for the Road America 120 is scheduled for 9 a.m. Saturday morning.  We’ll have a recap here at Frontstretch.