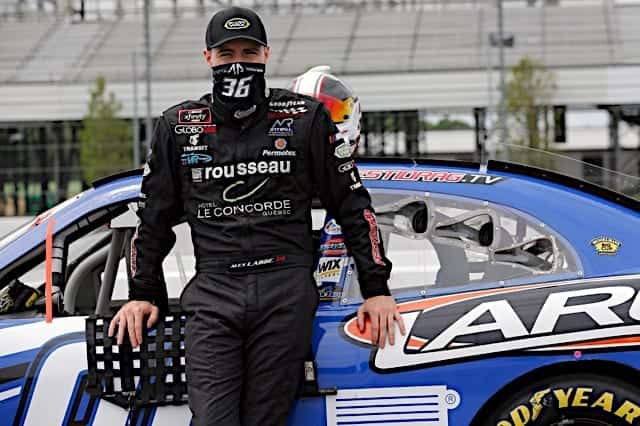 Labbe had run about seven laps during the period when NASCAR officials called him off the track. Since he didn’t have prior authorization or approval from NASCAR, he and his team had to discontinue their time at the track. A spokesperson for NASCAR confirmed to Motorsport that officials had to send officials to inquire about what Labbe was up to, then to vacate the circuit.

“We believe we followed every protocol,” Mario Gosselin, DGM Racing owner said to Catchfence. “This was not a test. We were participating in a qualifying session for an event later in the day. When NASCAR asked us to stop, we stopped immediately.”

NASCAR previously stated that drivers may only participate in one race from Aug. 14-16 at the Daytona road course.

It is not yet known whether Labbe or DGM will be penalized.

Labbe has three top 10s so far this year, his most recent coming at the Indianapolis Grand Prix Circuit on July 4.

Well, at least HE got some laps in.

Still no plans to watch the race if they don’t have practice!

If you break the rules you pay the price. If the driver and team are true professionals they should have known better. As for the nay sayers about Nascar it’s obvious they know Nothing about. Nascar and should kerp their opinion to themself.

That’s why we NEED THE PRACTICE!!!!

You need to see a practice to watch a race? Is it for you to practice watching?

clearly NASCAR is preventing anyone from exercising their freedoms. plus he’s got practice time on the layout so that’s definitely a plus.

Guess when comes to anything having to do with Nascar, have to check with Bubba Wallace first, he is the only one in Nascar that can do whatever he wants to. He tells Nascar what to do.

Why do the best stock car race teams in the world need practice? Everyone else unloads and goes racing.

Ok name one. Name one series that doesn’t hold a hot lap or practice session before they race.

Me
Reply to  Matthew

It was a SCCA event NOT Nascar. He should not have been on track unless he has a SCCA license. Just got caught…..

After 2024 season, and trying to find a New tv contract, want be long…

William:
Q:
If (as you say) people are no longer interested why are there so many posts (such as YOURS and mine) across so many message boards chat rooms and fan pages???

A:
Because MILLIONS of people are interested…
…that’s Why.

NASCAR is very relevant. If they weren’t the TV contracts would not be worth millions of dollars. Corporations wouldn’t be paying millions to sponsor a car or the series alone. Your just plain wrong William!

NASCAR has become a lacky for the big brand teams. Time to start a real race group that allows everyone a fair opportunity and not an opportunity that meets Hendrick, Childress, Penske and now Stewart Hass. This sport is quickly becoming a newscaster playground! Ratings and attendance continue to decline despite Covid 19.

Just NASCAR playing God’s again. There gonna lose everything and go bust since they only cater to the new fanbase which is largely smaller than the original fanbase that has nascar where they are now just wait it’s coming

I wish these comments were “corrected” before being published!

At least they stand for the National Anthem ??

And allow driver’s to desecrate the flag by wearing those nasty face masks of soiled flags!!!

Watch out. We “grammar police” will be the next organization to be ridiculed and defunded.

I am not a fan of the races being broken into segments but there enough cautions without having two that are not necessary. show a flag but let the race continue with out interruption

I don’t get why NASCAR is intervening in SCCA business.
Seems to me they don’t have a dog in that fight.
Do they own the track or something?
I mean, really: what’s it to them, for Pete’s sake?

NASCAR owns the Daytona International Speedway. They may own SCCA as well.

No, get with having practice, NASCAR or I will not watch the race!

Isn’t it interesting though that some teams are doing better than others with no pactice. More of an even playing field if thats possible.

“Run what ya brung racing”is gone forever because of politics. Also, Commercialization has overrun broadcasting airtime of NASCAR races to a secondary spectator sport.