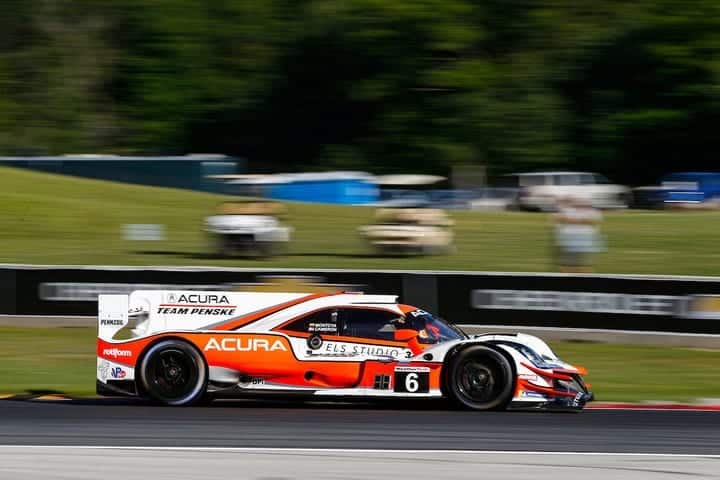 Friday afternoon saw the Cadillacs show good pace early on in the session.  Action Express Racing’s Felipe Nasr was quickest early on, followed by Wayne Taylor Racing’s Renger van der Zande.  The pace of van der Zande was interesting knowing that earlier in the race, he told SportsCar365.com that he thought that it was “impossible” to beat the Mazdas due to Balance of Performance.  That sentiment was similar to what he told Frontstretch after the Motul Petit Le Mans last October.  The car apparently stunk that day until the sun set.

Taylor’s lap was a quarter of a second faster than Cameron in the second Acura.  Van der Zande was third in the best of the Cadillacs, followed by Nasr and Mazda Motorsports’ Harry Tincknell.

LMP2 saw PR1 Mathiasen Motorsports’ Simon Trummer was fastest in LMP2 with a lap at 128.529 mph, good for ninth overall.  The lap was one-eighth of a second faster than DragonSpeed’s Ben Hanley, while Era Motorsport’s Kyle Tilley was third.

The other team in the class, Performance Tech Motorsports, had some problems during the session.  41 minutes in, Cameron Cassels spun the No. 38 ORECA 07-Gibson in Turn 5 and tapped the wall.  He was able to get the car restarted and limped it back to the pits via the short cut that connects Turn 5 to Turn 14.  However, this did bring out a red flag.  After some repairs, the car was able to come back out to finish the session.

GT Le Mans saw the Porsches at the top for nearly the entire session.  Porsche GT Team’s Nick Tandy ended up fastest in class with a lap at 119.949 mph, good for 13th overall.  Tandy’s lap was nine-hundredths of a second faster than teammate Laurens Vanthoor.  BMW Team RLL’s Jesse Krohn was third fastest, but a second off of Tandy.  Corvette Racing’s Tommy Milner was fourth, while teammate Antonio Garcia was fifth.

The No. 25 BMW of Connor De Phillippi had significant mechanical issues during the session.  28 minutes in, De Phillippi pulled off course with white smoke coming from the back of his BMW M8 GTE.  This drew a red flag.

In GT Daytona, Turner Motorsport’s BMW M6 GT3 was the best in class.  Bill Auberlen‘s second lap at speed was 114.908 mph.  This held up to be the fastest lap of the session.  Auberlen’s lap was eight-tenths of a second faster than the Porsche of Wright Motorsports’ Patrick Long.  Riley Motorsports’ Lawson Aschenbach was third in his Mercedes, while Paul Holton was fourth in his McLaren 720S GT3.  AIM Vasser Sullivan’s Townsend Bell rounded out the top five.

Saturday morning saw the speeds increase, but Acura Team Penske was able to continue what they started Friday.  Cameron’s quick lap of the weekend came right at the end of the session.  Teammate Ricky Taylor was one-sixth of a second back in second.  Mazda Motorsports’ Tristan Nunez was third quickest, then the Cadillac of Pipo Derani.  Tincknell was once again fifth quickest.

There was some trouble late in the session for the No. 55 Mazda as Jonathan Bomarito lost power on the run down to Turn 5.  He was able to use the short cut to get back to the pits without causing a red flag.  After a short time in the garage, Bomarito returned to the track.

Trummer was once again fastest in LMP2 with a lap at 129.400 mph.  He was four-sevenths of a second faster than Hanley.  Performance Tech Motorsports’ James French was third.

Unlike Friday, the Saturday practice session was not dominated by Porsche.  By the time that the session came to an end, it was Corvette Racing’s Oliver Gavin that was fastest with a lap at 120.449 mph.  Gavin’s lap was a quarter of a second faster than Porsche GT Team’s Frederic Makowiecki.  Jordan Taylor in the second Corvette was third, followed by Vanthoor and De Phillippi.

GT Daytona saw Turner Motorsport run into problems.  Robby Foley was fast early in the session, but hit debris on track.  This debris poked a hole in a brake line.  As a result, Foley ended up with nothing when he went into the hardest braking zone on the track.  He spun and hit the tires in Turn 5 to bring out a red flag.  Foley is ok and the team is currently repairing the BMW.

In a return to recent form, the top of the chart was dominated by AVS Vasser Sullivan.  The Lexus of Aaron Telitz was fastest with a lap at 115.941 mph.  This was three-sevenths of a second faster than teammate Frankie Montecalvo.  Foley was third fastest before his crash.  Meyer Shank Racing with Curb-Agajanian’s Mario Farnbacher was fourth fastest in his Acura, while Toni Vilander was fifth in his Ferrari.

Qualifying for the Road Race Showcase is scheduled for 2:50 p.m. ET Saturday afternoon.  The session will be streamed live at IMSA.com.