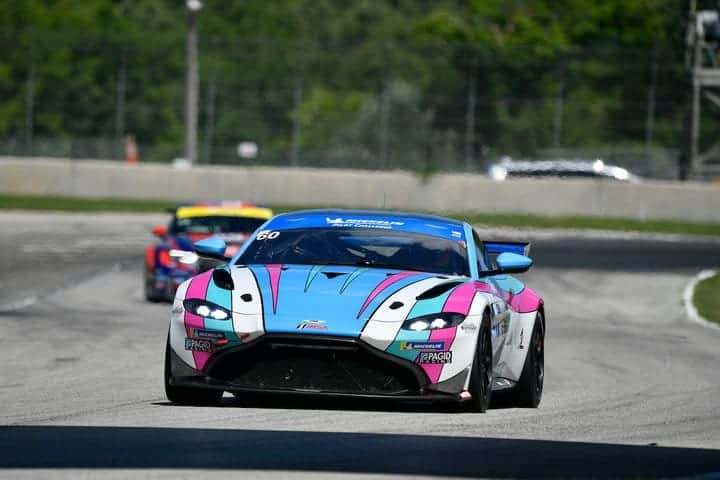 KohR Motorsports’ Nate Stacy won the pole early Saturday morning (Aug. 1) for the IMSA Michelin Pilot Challenge Road America 120.  He did so by lapping the 4.048-mile Road America circuit at an average of 107.077 mph, a new track record for Grand Sport.

The times slowly came down during the session.  CarBahn Motorsports with Peregrine Racing’s Tyler McQuarrie was fast once again, along with Multimatic Motorsports’ Scott Maxwell.  Stacy took the pole with a lap in the final 45 seconds of the session.

Stacy’s lap was more than a full second faster than McQuarrie, who was the previous track record holder.  Sheena Monk qualified third in her McLaren 570S GT4 for Motorsport In Action.  Russell Ward will start fourth in his Mercedes, while Maxwell will start fifth.

Turner Motorsport’s Robby Foley will have another busy race on Saturday, driving both BMW M4 GT4s during the event.  He’ll start the No. 95 in sixth.  Bryce Ward will start the second Winward Racing Mercedes in seventh, while Archangel Motorsports’ Alan Brynjolfsson will start eighth.  BimmerWorld Racing’s James Clay and Murillo Racing’s Jeff Mosing round out the top 10.

In TCR, Fast MD Racing’s Max Faulkner won the class pole in his Audi with a lap at 103.091 mph, good for 18th overall.  This lap was a mere two-thousandths of a second faster than JDC-Miller MotorSports’ Michael Johnson.  LA Honda World Racing’s Chris Miller will start third in class, followed by Spencer Brockman in the best of the Hyundais.  Mike LaMarra will start fifth in the No. 73 Honda.

The Road America 120 is scheduled to go green at 4:45 p.m. ET Saturday afternoon.  The race will be streamed live on NBC Sports’ TrackPass service.