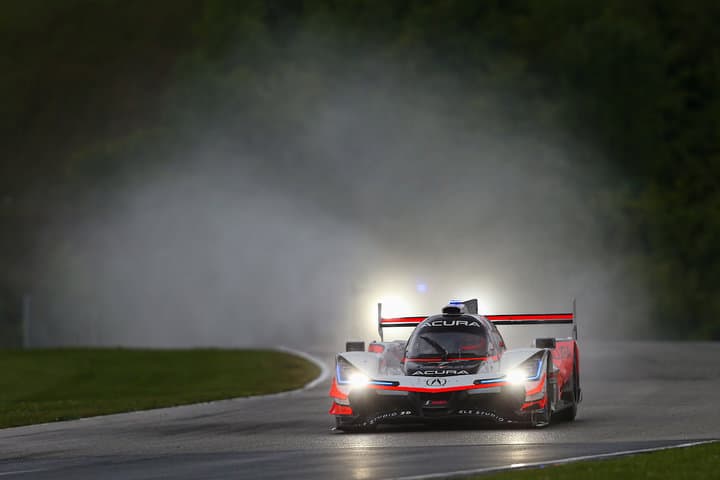 After a bone dry weekend at Road America, the last hour of the Road Race Showcase Sunday (Aug. 2) brought torrential rains to the 4.048-mile road course.  Acura Team Penske’s Helio Castroneves was able to take the lead from Wayne Taylor Racing’s Renger van der Zande with four laps to go and held on to take the victory.

“It was an interesting race,” Castroneves said after the race.  “Ricky did an amazing job over the weekend, putting it on pole and leading the race.  [On the final restart], I couldn’t see a thing but definitely I noticed a little gap.  And every time you have a little gap when there are a few laps to go, you go for it.”

Castroneves’ teammate Ricky Taylor started from the overall pole and led with ease while teammate Dane Cameron gave chase.  They were able to hold station until after the first round of pit stops.  Here, Cameron fell into the clutches of Mazda Motorsports’ Harry Tincknell.  Cameron went wide exiting Turn 5, which allowed Tincknell to attempt an overtaking move.  Cameron then tried to block it and contact was made.  This was a double whammy for Cameron.  Not only did the contact damage the No. 6 Acura ARX-05 and cut the left rear tire, but he also picked up a penalty for blocking.  The move put the No. 6 right out of the hunt for the day.

The vast majority of the race up front was a duel between the No. 7 Acura and both of the Mazdas.  After the run-in with Cameron, Tincknell was able to get up to Ricky Taylor and harass him for the lead.  He was unable to make the pass.  The No. 77 Mazda of Tristan Nunez was not far behind.

The rain with just less than an hour to go turned the race upside down.  It came in the middle of a round of pit stops.  The Acuras and Mazdas had already stopped before the rain arrived and put on slick tires.  Meanwhile, the Cadillacs chose to stay out as long as possible to get in a window to be able to make it to the finish on fuel.  For van der Zande, who had spent most of the race in fifth, he stopped just as the rain began to pick up and put on wet tires.

Shortly afterwards, heck broke out.  Action Express Racing’s Pipo Derani slid off-course in Turn 3 and nosed into the barrier.  Shortly afterwards, Era Motorsport’s Kyle Tilley on the inside of the same corner.  Problem was, it wasn’t raining all the way around the course.  The rain at the start-finish line was torrential, yet it was dry in Turn 5.  Quite the quandary.

Ultimately, the caution flew when two separate incidents occurred in Turn 1.  First, Earl Bamber, who was leading the GT Le Mans class at the time, hydroplaned off the course, spun through the gravel and bumped the tire barrier.  Shortly afterwards, Heinricher Racing’s Alvaro Parente spun entering the corner and hit the concrete wall before coming to rest in the trap.  It didn’t take long for IMSA officials to put out the red flag and stop everyone once lightning was sighted.

Eventually, the red was lifted and teams ran around under caution for a couple of laps.  The lap before the green came back out, most of those teams who had not stopped for wets came into the pits.  Race leader Oliver Jarvis in the No. 77 Mazda made a tactical error and chose not to pit.

The team realized their error immediately and brought Jarvis in as soon as they could.  Unfortunately, that was on the restart, which gave the lead to van der Zande with Castroneves on his tail.  Van der Zande tried his best, but went wide exiting Turn 14.  That was all Castroneves needed to get past.  Another incident brought the yellow out half a lap short of the checkered flag, guaranteeing the win.

Castroneves and Ricky Taylor’s margin of victory was just three-eights of a second over van der Zande and Ryan Briscoe.  Derani and Felipe Nasr recovered from their appointment with the tire barrier to finish third.  JDC-Miller MotorSports’ Joao Barbosa and Sebastien Bourdais were fourth in their Cadillac, while Tincknell and Jonathan Bomarito had to settle for fifth.

The rain also turned the LMP2 class on it’s head.  PR1 Mathiasen Motorsports’ Patrick Kelly and Simon Trummer led the race from the drop of the green flag until the rains came.  Then, Trummer appeared to run in the back of Juan Pablo Montoya‘s Acura on the frontstretch.  This saw Montoya spin and hit the wall.  Trummer drove away, but ended up with debris penetrating the nose of his ORECA 07-Gibson.

Well we lost the victory, but I’m thankful i didn’t end up in hospital. If this peace would have hit me, not sure how it would have end up. Thank’s to @oreca to build such safe cars. @IMSA pic.twitter.com/UrhfLhmhR1

To make matters worse, Trummer then picked up a WeatherTech sponsor placard and dragged that around the track for four miles before getting back to his pit.  The damage ended the day for the team.

Trummer’s misfortune immediately benefitted DragonSpeed’s Ben Hanley and Henrik Hedman.  Hanley inherited the LMP2 lead and held on over the last few laps to take the class win.  Hanley and Hedman’s margin of victory was a lap over Performance Tech Motorsports’ Cameron Cassels and James French, while Tilley and Dwight Merriman were third.

Laurens Vanthoor started on pole in GTLM, but was passed at the start by Corvette Racing’s Jordan Taylor.  Jordan was able to keep the lead for the first half hour of the race, but he went wide in Turn 8, which allowed Vanthoor to retake the lead.

Vanthoor led until he made a stop on Lap 25.  It was here that Bamber got into the car.  Once the cycle of stops were complete, Bamber put the No. 912 back in the class lead.   Bamber was able to hold onto the advantage and was looking good for potential victory until the rain came.

Bamber’s crash into the wall from the lead ruined an excellent day.  Teammate Nick Tandy took over the class lead as a result.  As a result of the stops during the caution, BMW Team RLL’s John Edwards took over the lead while Tandy dropped to third.

Once the green came back out, Edwards continued to lead while Tandy and Antonio Garcia fought for second.  With a lap and change to go, Tandy got past Garcia and put the pressure on Edwards.  However, trouble struck in the Kink as both Edwards and Tandy went off in heavy rain.  This brought out the final caution and gave the class victory to Garcia and Jordan Taylor.

Oliver Gavin and Tommy Milner gave Corvette Racing another one-two finish in the treacherous conditions.  Edwards and Jesse Krohn recovered from their spin to finish third.  Tandy and Frederic Makowiecki were classified in fourth, while Bamber and Vanthoor were two laps down in fifth after their wall contact.

GT Daytona looked like it was going to be another benefit for AVS Vasser Sullivan.  Aaron Telitz won the pole on Saturday and led early on Sunday with teammate Frankie Montecalvo giving chase.  Telitz was able to stretch out a three-second lead prior to the first round of pit stops.  However, the No. 12 Lexus with Townsend Bell at the wheel was able to jump the No. 14 during the stops.

For the vast majority of the race, AVS Vasser Sullivan’s primary competition was Turner Motorsport’s BMW M6 GT3 of Robby Foley and Bill Auberlen.  Foley, driving with a dislocated knee cap after a practice crash Saturday morning, did all he could to keep the yellow and black Lexuses in sight before handing over to Auberlen.

Auberlen put the pressure on Jack Hawksworth, eventually getting past and moving into second.  Auberlen was slowly running down Bell before the rains came.  Unfortunately, the team was caught out on strategy and fell way back.  Meanwhile, both the AVS Vasser Sullivan entries pitted for wet tires at the same as van der Zande did.

When the race restarted, Bell led over Hawksworth with Scuderia Corsa’s Toni Vilander in third.  However, it was Meyer Shank Racing with Curb-Agajanian’s Mario Farnbacher that was the real threat.  Restarting fifth, Farnbacher quickly moved all the way up to second and started threatening Bell for the lead.

Coming to the white flag, Farnbacher got alongside entering Canada Corner and was able to make the pass stick.  It looked like Farnbacher was going to take the Acura to victory.  However, on the final lap, Farnbacher went off in the Carousel.  That allowed Bell to retake the lead just before the caution came out to end the race and give AVS Vasser Sullivan their third straight victory.

That said, the trouble wasn’t over yet.  Bell told SportsCar365.com that he slid off the track on the cool down lap in Turn 14 and hit the wall, damaging the front end of his Lexus.  He was just barely able to drag his car to victory lane afterwards.

Farnbacher and Matt McMurry were right behind the No. 12 Lexus in second.  Telitz and Hawksworth finished third, while Vilander and Cooper MacNeil were fourth.  Wright Motorsports’ Ryan Hardwick and Patrick Long were fifth.  Just to give you an idea of the conditions teams had to deal with, Scuderia Corsa posted this picture of their Ferrari after the race.

The IMSA WeatherTech SportsCar Championship takes a couple of weeks off from here.  The GT classes will be in action next at VIRginia International Raceway on Aug. 22 for the Michelin GT Challenge at VIR.