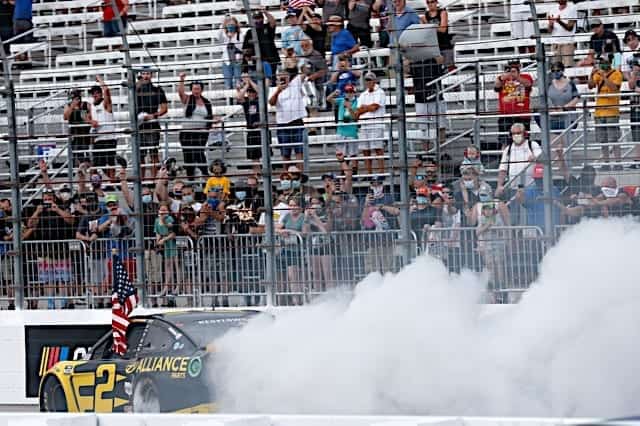 A delicious lobster dinner awaits Brad Keselowski after he was able to capture the prized crustacean by winning the annual NASCAR Cup Series contest in New England.

Keselowski took home the live trophy following a back and forth duel with Denny Hamlin in the Foxwoods Resort Casino 301 at New Hampshire Motor Speedway. The pair battled for the lead on multiple occasions, but with fuel mileage concerns cropping up in sizable numbers on the run to the finish, it was Keselowski who was able to lead the final 80 laps en route to the checkered flag.

“We’ve had a lot of great races with the (No.) 2 car, but we just hadn’t really gone out and dominated a race,” Keselowski told NBC Sports. “I was talking to (crew chief) Jeremy Bullins about what we needed to get to that next level, and that right there, is what we need to go and dominate a race.”

The win not only marked Keselowski’s 33rd career NCS victory, but also the third checkered flag of the season with Bullins. The two were paired together at the start of the 2020 season in Team Penske’s crew chief shakeup.

“We’ve had a good career and I needed a kick in the ass and Jeremy and this whole team has been a kick in the butt for me to make it a little better and take it to another level,” Keselowski added. “We’re doing that so far. I’m really thankful. We’re in a great spot here.”

While it was Keselowski who made quick work of polesitter Aric Almirola, it was not a great start for Bubba Wallace and Corey Lajoie. Both were found to have improperly mounted weight ballasts during pre-race inspection and were forced to start in the rear. To make matters worse, NASCAR suspended their crew chiefs Jerry Baxter and Ryan Sparks for the event and docked the duo 10 points apiece.

Rain was a pesky annoyance throughout the afternoon, but just one irksome shower slowed the action on lap 93 before remarkably lifting and moving away as fast as it came. Fortunately, the moisture did not return, but solace was not found among the angst-filled crew chiefs up and down pit road as the threatening overcast skies failed to depart.

While the rain did subside, the tricky turn 3 did not. With a fusion of bumps, traction compound and a green race track, several drivers including Kurt Busch, Clint Bowyer, William Byron, and Ryan Blaney, washed up the track and lost several positions, all within the first 12 laps of the event.

The drama dramatically intensified just a short time later when Kyle Busch slammed the wall in the same corner after cutting down a tire, catalyzed by earlier wall contact. The winless season continues for the reigning Cup champion who was relegated to the last place finishing position, marking the first time Busch finished shotgun to the field in over four years.

The dog days of summer continue to hound @KyleBusch.

His day is done at @NHMS. pic.twitter.com/ov3JIH1vZY

Later on in the event, Matt Kenseth brought out two separate cautions in the corner after hitting the wall perpetuated by tire issues. Not to be outdone, Christopher Bell and John Hunter Nemechek also had turn 3 snarls. Both Kenseth and Nemechek went home early.

While some struggled, others quickly got their feet underneath them as Blaney, Hamlin and Keselowski engaged in a feverish battle for the lead throughout the maiden stage. Ultimately, Hamlin got the crown after using pit strategy succeeding a lap 63 caution for a spinning Jimmie Johnson.

While it initially looked like Hamlin would go two-for-two on stage wins, it was Keselowski who nipped the No. 11 by a fender on a later restart to become the second stage victor of the day. While it was all going smoothly at the front, the same could not be said for defending winner Kevin Harvick who was forced to make a green flag pit stop in the stage after an ill-fated fuel strategy.

Kevin Harvick coming down pit road. He's out of fuel. Four tires for him and he returns to the track at lap 166.#Foxwoods301 | #NASCAR

The lone driver to do so, Harvick nearly lost two laps in the skirmish but was ultimately able to rebound and finish a strong fifth after passing Matt DiBenedetto on the final lap. Ahead of Harvick was Martin Truex Jr and native New Englander Joey Logano, who finished third and fourth, respectively.

Farther back was Almirola in seventh place. The Stewart-Haas Racing driver extended his consecutive top 10 streak to nine, a career-best.

The NASCAR Cup Series heads to Michigan International Speedway for a unique doubleheader on Aug. 8-9. The Firekeepers Casino 312 is scheduled to go green at 4:00 p.m. ET on Aug. 8 followed by the Consumers Energy 312 at 4:30 p.m. ET the following day. NBCSN will provide TV coverage for both events.

This’s is what Penske Racing can do. Don’t know why Ryan Blaney 12 can’t get the job done.