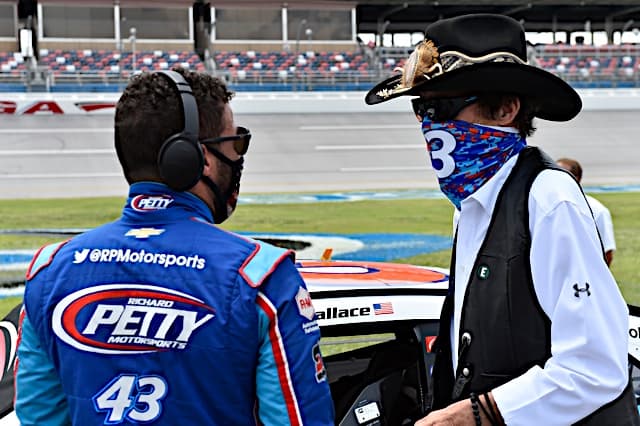 “We’re in discussions with [Wallace] about an extension that includes ownership in the team,” Murstein said.

This offer comes after Wallace has been linked to two vacant rides in the past month for next season, to the No. 42 of Chip Ganassi Racing by Adam Stern of Sports Business Daily and as a possibility for the No. 48 of Hendrick Motorsports last month by Bob Pockrass of Fox Sports.

Wallace has had an eventful summer, taking a stand against racism by running a Black Lives Matter car at Martinsville Speedway, everything connected to the ripple effects of a garage rope fashioned in the shape of a noose found at Talladega Superspeedway, and briefly feuding with Michael McDowell after being taken out of the NASCAR All-Star Open.

Wallace is also on-pace for a personal best full-time Cup season and the best full-time season for RPM since 2015, from an ownership points perspective.

Everything off-track has led to a number of sponsorship opportunities for Wallace, with Murstein telling Forbes that “We went from probably having one meeting a week with a potential sponsor to five the last five weeks or so.” And that has been shown with the team announcing a multi-race, multi-year sponsorship with CashApp this month along with Wallace securing a personal deal with Beats by Dr. Dre.

Murstein also stated that he expects a deal to close with Wallace “within the next couple of weeks.”

Congratulations bubba, for earning that owner percentage. You played your cards just right. Snookered em A+

It’s clearly all about sponsorship for all these owners. Bring enough money to the table and you get a ride no matter whether or not you can drive. Bubba is a mid-pack racer and will never be anything more.

Bubba is only midpack because the bottom dozen driver’s in cup don’t belong in cup at all. Bubba is nearer the bottom of the talent pool. But since bubba is only half white he can be marketed for a fortune by a shrewd owner. That card is all bubba had to play and he knows it very well.

Bubba did manage to win 6 Truck races with KBM, which puts him ahead of some of the backmarkers.

The 48? Nah. The Ten years ago, sure. If they’re really as woke and welcoming and diverse as they claim, they’ll put Wallace in one of the current Gibbs teams (removing one of those privileged white males) and let him really show that he’s Dale Earnhardt, Jeff Gordon & Willy T Ribbs all rolled into one.

Bubba knows about how to race, or at least play the card game.

Makes sense in a way. RPM is a mid level team at best. They struggle to gain sponsors, mos of whom we have never heard. Murstein, the majority owner, cab medallions are under pressure from both Uber and the pandemic. Richard Petty, a figurehead, is 83 years old and no longer as relevant as he once was. Wallace’s contract is up at the end of this year.
Regardless of the driver they get he will have to be paid a significant sum of money. Yet if they offer him a minority ownership stake they can likely reduce the outflow of cash, at least in the short term.
So a win/win for the most basic of reasons: money.

This is nothing more than the whole Danica thing all over, again. He’ll coast for about 10 years, then when he doesn’t produce they’ll put someone else in the car.

If you mean that once the money they are able to bring to a team dries up they are out I agree with you. Of course the same could be said for a significant portion of the field these days.
Since the onus for bringing money has shifted to the drivers that seems to be the norm these days.