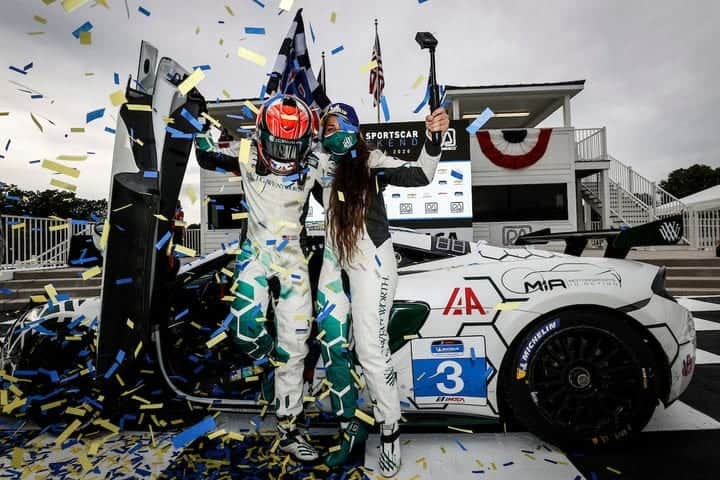 Motorsport In Action’s Corey Lewis and Sheena Monk emerged victorious in Saturday’s Road America 120 at Road America in Wisconsin.  For Monk, it is her first career Michelin Pilot Challenge victory and only the second of her professional career.  For Lewis, it is his third victory in the series.

“This is just truly amazing,” Lewis said in Victory Lane.  “Motorsport in Action gave us an awesome, awesome McLaren.  For Sheena, her first time on the podium is on the top step, it couldn’t be better.”

“Honestly, I don’t even have words right now.  It doesn’t really feel like its sunk in yet,” Monk stated.  “It’s been a long road for me.  I had a bad accident [at WeatherTech Raceway Laguna Seca] and I got very injured.  This is my first win since that happened.  It’s a big deal for me since I could have left the sport after [the big crash], but it’s my dream to be here, so I kept going.  [Luckily], the pieces finally came together.”

KohR Motorsports’ Nate Stacy started on pole in his Aston Martin and quickly pulled away from the field.  Monk was able to get past CarBahn Motorsports with Peregrine Racing’s Tyler McQuarrie at the start for second, but was not able to keep up with Stacy.  Over the first few laps of the race, Stacy was able to pull away to a seven second lead.

The early portion of the race was rather physical.  Brakes were a big issue during the race.  Mark Siegel, driving the second CarBahn Audi, went out of the race on the second lap when he appeared to suffer brake failure.  He was unable to slow down his Audi enough at Canada Corner and went off into the tire barrier.  While Siegel was able to drive his damaged car back to the pits, he was done for the day.  A couple of laps later, Turner Motorsport’s Robby Foley and Winward Racing’s Russell Ward had contact exiting Turn 6, resulting in Ward spinning out.  The next lap saw Multimatic Motorsports’ Scott Maxwell spin in Turn 6 after contact from BimmerWorld Racing’s James Clay.

Once McQuarrie was able to get back past Monk, he was able to gain on Stacy’s Aston Martin.  The lead cut down from eight seconds to five.  Monk wasn’t holding anyone up, either.  She was able to settle in her own space, about five seconds behind McQuarrie and four seconds ahead of a pack of contenders.

After the first round of stops and driver changes, the Aston Martin with Kyle Marcelli now at the wheel was still in the lead, just a couple of seconds ahead of Jeff Westphal.  Lewis ended up starting his stint 20 seconds out of the lead in third.  He also had the fastest car on the track.  He was able to pull that margin down to seven seconds over the next few laps.

The race ultimately came down to the final round of stops.  Westphal stopped first, then Marcelli.  Finally, Lewis pitted the JG Wentworth McLaren with 36 minutes to go.  The Motorsport In Action team was able to get four fresh tires onto the McLaren and fill it up with fuel while getting Lewis out in front of both Marcelli and Westphal.

Marcelli had the advantage of warm tires, so he was able to pressure Lewis for the lead for the first lap or so.  Once Lewis’ tires were up to temperature, he was able to open up a gap.  Further back, Archangel Motorsports’ Trent Hindman spun in Turn 13 after contact with Winward Racing’s Billy Johnson while fighting for fourth.  Johnson ended up getting a drive-through penalty for causing the incident.

Lewis pulled away over the final half hour of the race and won the race easily, the second-ever victory in Michelin Pilot Challenge for Motorsport in Action.  However, the race ended under the one and only full course caution of the day after Johnson spun exiting Turn 7 and went hard into the wall, littering the track with debris.

As a result, Lewis and Monk’s margin of victory was 1.67 seconds over Marcelli and Stacy.  McQuarrie and Westphal were third, followed by the Mercedes of Riley Motorsports’ James Cox and Dylan Murry.  Foley and Bill Auberlen were fifth.

Miller’s race ended early when he suffered brake failure entering Turn 5 and spun into the runoff while running for sixth.  Mason Filippi‘s day also ended early due to brake problems.

Due to a Balance of Performance change for the Hyundai Veloster N TCRs, most of them were unable to make it to the halfway point before pitting.  The one that could?  The No. 21 that was started by Harry Gottsacker.  Norman did not accomplish this.  However, he saved a bunch of fuel during his stint in the car.  That left him confident that Gabby Chaves could get to the finish without a splash ‘n go.

Ultimately, fuel was not an issue as Chaves was able to stretch his tank to the finish to take both his and Norman’s first career TCR victories.  The margin of victory was a little more than a second over Brockman and Parker Chase.  Gottsacker and Mark Wilkins rounded out a second consecutive podium sweep for Bryan Herta Autosport.  KMW Motorsports with TMR Engineering’s Roy Block and Tim Lewis Jr. were fourth in their Alfa Romeo Giuletta TCR, while Fast MD Racing’s Faulkner and James Vance dropped back to fifth late while conserving fuel.

Michelin Pilot Challenge teams are off for the next couple of weeks before they travel to VIRginia International Raceway for the Virginia Is For Racing Lovers Grand Prix on Aug. 23.  That race will be streamed live at 2:55 p.m. on NBC Sports’ TrackPass.