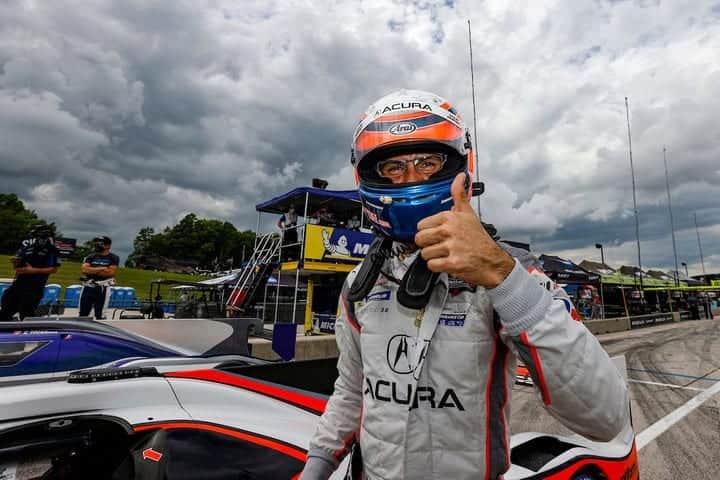 Acura Team Penske swept the front row Saturday (Aug. 1) for the Road Race Showcase at Road America.  Ricky Taylor will lead the field to green Sunday after winning the pole with a lap at 133.621 mph.

“It was a great team effort, first of all,” Taylor said afterwards.  “The car is wildly different than when we unloaded.  We’ve shown great pace all weekend so to convert it to a race win would be really amazing to
finally get the monkey off our back and start turning out season around.”

Taylor’s lap was a full three-tenths of a second faster than teammate Dane Cameron, who will start second.  The second row will be comprised of the two Mazda RT24-Ps with Harry Tincknell beating out Tristan Nunez for third.  Wayne Taylor Racing’s Ryan Briscoe will start fifth.

The Prototype session more or less ended four minutes early after Action Express Racing’s Felipe Nasr spun into the gravel at Turn 3 to bring out the red flag.  As per IMSA rules, anyone who brings out a red flag during a qualifying session loses their best time in the session.  Nasr lost the time that would have put him fifth on the grid.  He’ll start seventh now.

In GT Le Mans, five of the six cars in the class were quickest at one point during the 15-minute session.  When the dust cleared, it was Porsche GT Team’s Laurens Vanthoor who claimed the pole with a lap at 120.846 mph.  Vanthoor’s lap was one-quarter of a second faster than Corvette Racing’s Jordan Taylor.  Oliver Gavin was third in the second Corvette, while BMW Team RLL’s Bruno Spengler will start fourth.  Jesse Krohn will start fifth.

In GT Daytona, the AVS Vasser Sullivan Lexuses were once again way out in front.  Aaron Telitz took his first GT Daytona class pole with a lap at 115.427 mph.  In three races in the No. 14 Lexus, Telitz has not qualified worse than second in class to this point.

The Road Race Showcase is scheduled to go green just after Noon ET Sunday afternoon.  Coverage of the race will air live on NBC.