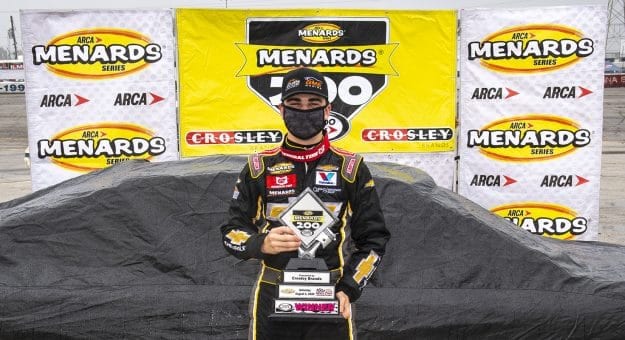 The ARCA Menards Series had a battle the last two days with Mother Nature and she ultimately earned the victory two days in a row.

Sam Mayer went two-for-two for the weekend when rain shortened Sunday’s already-postponed race. He took the lead shortly after the halfway point on a restart to tally his second career victory. Chandler Smith rebounded from a suspension issue Friday night to finish second. Bret Holmes finished third while Michael Self and Derek Griffith rounded out the top-five.

"I'm liking this place a lot more than last year."

The race was moved Saturday from its original start time to noon as the series prepared for a rainy afternoon. They managed to get six laps completed Saturday evening before the caution was displayed for a spin involving Taylor Gray. At that point, the track was already slick which was the ultimate reason for the spin. After multiple battles with rain throughout the day, the race was postponed to Sunday.

[UPDATE] Today's Menards 200 presented by Crosley Brands has been postponed until Sunday.

The race restarted and ran five laps under caution before taking the green flag. Ty Gibbs led most of the way through the second segment of the race, though he did relinquish the top spot to Chandler Smith for a short time before the first race break.

The caution flew for weather at lap 103, just past the halfway point, with Gibbs in the lead, but it was just a light rain. The field took the green again at lap 117 and turned a good chunk of laps. Mayer and Gibbs were battling hard for the lead when in turns 3 and 4 Gibbs lost it on the bottom making contact with Mayer putting out the caution flag.

Persistent rain brought out the red flag and ultimately ended it after 127 of the scheduled 200 laps. Gibbs ended up 10th on the day.

Raced in the rain and got wrecked leading. Nothing else to say. #rain #why

Meanwhile, in the ARCA Menards Series points standings, Holmes knocked off a few more points and now is seven points behind Self. Drew Dollar sits third while DGR-Crosley teammates Hailie Deegan and Thad Moffitt round out the top five in points. The series returns Sunday, Aug. 9 with the VizCom 200 at Michigan International Speedway.