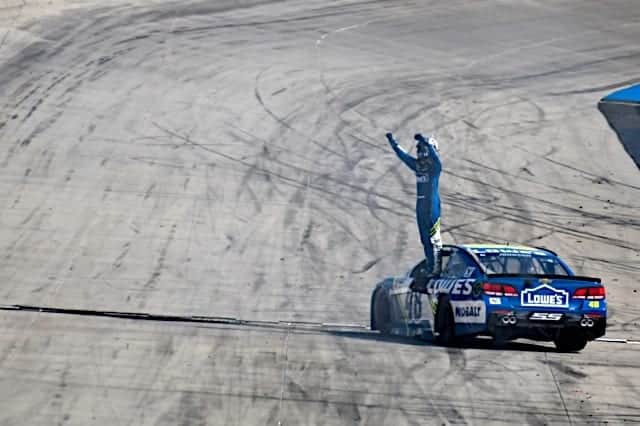 5 Points to Ponder: Does It Actually Matter if Jimmie Johnson Doesn’t Win Again?

Does It Matter if Jimmie Doesn’t Win Again?

In the past few months (and to be fair, years), we’ve seen a lot of column inches dedicated to the simple question of when Jimmie Johnson will add to his 83-race win total. For those of a mathematical persuasion, the streak has now reached an incredible 114 races, dating all the way back to June 4, 2017. I can’t imagine a single prognosticator would have predicted Johnson would go through such a futile stretch of not winning following his victory at the Monster Mile in 2017. Adding to the mix recently are the growing calls for Johnson to postpone his planned retirement from stock car racing at the end of the season. No less an authority than Blake Shelton even weighed in on the issue.

Just my opinion but since 2020 has turned out to be an absolute cluster with Covid-19 how about @JimmieJohnson make NEXT YEAR be his retirement year? Give the fans a chance to see him in person one more time AND a reset season for him. Just saying Jimmie… Please.

Johnson, meanwhile, who seems to have his sights set on some open-wheel racing in 2021 following a recent test session he clearly loved, appeared to at least be vaguely open to the notion:

Can next year be a semi-retirement year?? Let’s have a cold one soon by the way. https://t.co/Axjvk3KqYq

The question for me isn’t so much when/if he’ll win, but rather, does it matter if he doesn’t? Is Johnson’s career diminished if ends the season with a big fat goose egg in the wins column? And for me, the simple answer is no — not even slightly. Johnson, with his record-equaling seven Cup championships (including an incredible stretch of five straight) and 83 wins, is a guaranteed first-ballot Hall of Famer and arguably the greatest driver the sport has ever seen. A few poor seasons (by his own very high standards) doesn’t change that. Let’s not forget, both the King himself and three-time champion Darrell Waltrip went eight full seasons without a victory to conclude their successful stock car careers. Now don’t get me wrong, it would be great to see Jimmie win again. But if he doesn’t, he’s still one of the true greats. A disappointing end to a stellar career won’t change that one iota.

How Will the Starting Lineup Be Set for the Playoffs?

In the absence of practice and qualification since the return to racing following the pandemic break, the starting lineup has been set by a random draw, conducted in three discrete groups (1-12, 13-24 and 25-36). Random of course, unless you’re Johnson, who has been picked to begin in 20th for four straight weeks … or Aric Almirola, who has led the field to the green on three occasions (and started second an additional three times). So now that we know we’ll be continuing in this vein throughout the 2021 season, the question becomes how they’ll set the field for the playoffs.

“NASCAR will adjust the starting lineup draw procedure for the playoff races and will announce the new process at a later date,” noted NASCAR President of Competition Scott Miller a few weeks back. “Maybe still some kind of a draw, but obviously, probably something that encompasses the playoff cars in one lot and the rest of the field in another. Haven’t really gotten there yet, but we know that once the playoffs come, we may have to adjust the way we draw if we aren’t practicing and qualifying.”

Now, while I have full faith NASCAR will consider all eventualities, color me worried about how the format might end up. As we’ve seen this year, the same drivers regularly rise to the top. But I worry, particularly, about shorter races on smaller tracks like Martinsville Speedway, Richmond Raceway and of course the season-decider at Phoenix Raceway. Given that Martinsville and Phoenix are the penultimate two races, even more so. We can’t have a situation where one driver (or more than one) are hampered by their starting spot versus the competition. Truth is, there probably isn’t an easy or a palatable answer here, and someone is likely to suffer by result of a random draw. Here’s hoping the powers that be can come up with a mechanism that is objective and fair. Pulling numbers from a hat doesn’t get that done. Watch this space, as they say, because I’ve got a feeling this is going to be a big issue before the season is all said and done.

Will Kyle Busch Ever Win a Cup Race Again?

Obviously I’m being sarcastic about a driver with 56 victories in 554 Cup races (a phenomenal 10.1% win rate). Just by typing this headline, it means the win is coming this weekend, and in fact he’ll probably double up. Kyle Busch’s winless streak now sits at, by his own intensely high standards, 20 whole races, and he sits 10th in the standings (94 points above the cutoff line) with just one solitary playoff point. You have to go back quite a way for Busch’s last long winless streak — 36 races across the 2014 and 2015 seasons — but even that is hardly a huge stretch. What is clear is that Busch is struggling in 2020, with some argument made that his precision approach to driving is impacted by the lack of practice and qualifying. Even if this is the case, though, everyone else is in the same boat, so why it would have such a profound effect on the younger Busch sibling is an interesting question, particularly given that his teammates, Martin Truex Jr. and Denny Hamlin, have been fast. Busch has made the Championship 4 for five straight years, winning a title in his first and also most recent years (2015 and 2019).

What we do know about Busch is that if he hits the setup off the truck, he could easily reel off multiple wins in no time at all, as despite what the record suggests this year, he really is that good. “It’s still 2020, but sooner or later, we have to turn this stuff around,” said Busch after yet another disappointing result, wrecking just 15 laps into the race at Loudon and finishing a distant 38th.

So the big question is will he? For me, the answer is yes. He’ll win again — likely before the playoffs — and he’ll be a factor in the postseason. I just can’t imagine a scenario to the contrary.

Following his third victory of the season at New Hampshire Motor Speedway, news broke on Monday morning that Brad Keselowski has re-upped at Team Penske, ending speculation that he might be a candidate for the iconic number 48 ride at Hendrick Motorsports.

“We are pleased that Brad will continue to be a part of our organization,” team principal Roger Penske said. “Brad not only demonstrates talent and skill on the track, but his leadership away from it and his dedication to our partners have had a huge impact in making our organization one of the best in NASCAR.”

Just a week and a half ago at Kansas Speedway, Keselowski had expressed hope about where things were going contractually. “It’s not there. I’m very hopeful… . The good thing is there’s progress. But nothing is done until it’s done, so I feel very hopeful.” Turns out his grounds for optimism were justified, but given how long it takes to paper a deal like this with regard to contract negotiations, he must have known they were close to a deal and essentially just discussing the details. While terms were not officially announced, Keselowski is no doubt relieved to have his future sorted.

“We’ve accomplished a lot of things together over the years, including winning both the Cup and Xfinity Championships, the Brickyard 400, the Southern 500 and the Coca-Cola 600. Now, my goal is to win the Daytona 500, another championship and continue to build Team Penske into the best NASCAR team in the garage area,” said the 2012 champion. Keselowski is one of those drivers most avid fans have a fairly forthright opinion about — both good and bad. There will no doubt be some who are disappointed he won’t take over driving duties for the No. 48, but given his success at Team Penske, continuing to stay under the aegis of the Captain makes all the sense in the world. He’ll be one to watch as the playoffs begin.

And finally this week, a quick shout-out to my favorite racing podcast — Positive Regression — which, for me, is absolutely required listening each week. Hosted by FOX Sports’ Alan Cavanna and David Smith of the excellent Motorsports Analytics site, the “PosRegPod” takes an analytical look at all things Cup racing, as well as previewing the upcoming race weekend. Cavanna is an easy-to-listen-to host with a deep knowledge of the sport he so clearly loves, while David Smith brings number-crunching data analysis and a sheer wealth of knowledge which has significantly helped broaden my racing knowledge in general. Smith feels like one of those folks who’s forgotten more about NASCAR than I personally know, and his palpable love for NASCAR racing shines through. The analysis also helps me look past some of my own inevitable and sometimes unconscious biases and focus on what the data is really telling us, something that can be hard with a sport as emotional as NASCAR. So if you haven’t, what are you waiting for — check out the Positive Regression podcast.

Danny starts his 12th year with Frontstretch in 2018, writing the Tuesday signature column 5 Points To Ponder. An English transplant living in San Francisco, by way of New York City, he’s had an award-winning marketing career with some of the biggest companies sponsoring sports. Working with racers all over the country, his freelance writing has even reached outside the world of racing to include movie screenplays.
@dannypeters
Previous The Underdog House: Michael McDowell Lonely at the Top
Next Beside the Rising Tide: If You Build It…