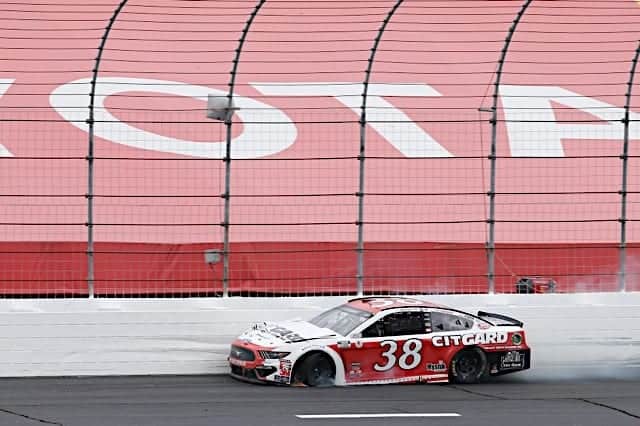 New Hampshire Motor Speedway is probably one of the more polarizing tracks on the NASCAR Cup Series calendar. It is one of the toughest tracks on the calendar for passing. This year brought the revised rules package that decreased downforce. The result was a Cup race with the most lead changes on the 1.058-mile oval since 2002 (22). Interesting, when you really think about it.

Pre-race was mainly focused on a couple of news pieces. One was Richard Petty Motorsports apparently giving Bubba Wallace the godfather offer of equity in the team to stay on going forward. On paper, it sounds wacky. In practice, this is actually a better situation performance-wise than Tony Stewart walked into after Gene Haas godfather-offered him in 2008. The No. 43 team is much stronger than either of the Haas CNC teams were back then. The better of the two teams (No. 66) was 30th in owner points, while the No. 70 (which Stewart took over and changed to No. 14) was the worst full-time team that year, finishing 43rd in owner points.

If Wallace were to take the offer, he’d have a stronger foundation to build on, but less money to play around with. Haas significantly increased the funding for the team once Stewart joined and better talent came in behind the scenes. Unfortunately, Wallace cannot guarantee any of that. The hope is that the team could fin,d additional funding that would allow them to be more competitive, but that’s tough right now.

The other major story was Jimmie Johnson finally getting his chance to have at it in a car normally driven by Felix Rosenqvist on the Indianapolis Motor Speedway’s road course. My understanding is that Johnson was setting competitive times. By all indications, he had a ball.

The lower amounts of downforce Sunday led to a much more enjoyable race to watch. Those that were on-site at the track were likely satisfied with the on-track product. You had side-by-side racing, there was some bumping, banging and lead changes. That said, this was a race dominated by Brad Keselowski and Denny Hamlin. Despite 22 lead changes, those two drivers led all but 25 laps.

One of the big problems Sunday was with the Goodyear tires. A number of drivers had issues. Kyle Busch was the most notable, as he lost his right front tire on lap 16 and crashed out.

Naturally, Busch was not pleased afterwards. This crash happened during the race’s first commercial break. Given the complete lack of rubber on the track, the idea of a “green” racetrack causing early issues wouldn’t be out of the question. Goodyear did actually tweet out that an outside source caused the failure.

The 18-car of @KyleBusch ran over some debris at @NHMS and had a cut in the tread of his RF tire, causing him to hit the wall. @JoeGibbsRacing

I don’t recall NBCSN actually mentioning this on the air Sunday during the race. They also mentioned that at least one of Christopher Bell’s flat right-rear tires was due to a melted bead. I find that interesting since that issue usually blows out a right-front tire.

Viewers never really got a good idea on what tire wear was looking like on Sunday. Traditionally, tire wear has never really been that significant at Loudon, and that has exasperated teams and fans alike. Heck, that’s how Tiregate came about in 1998, when Jack Roush accused Jeff Gordon’s team of soaking tires. In reality, the two-tire strategy beat Mark Martin that day straight up. Didn’t help that Martin smacked the wall exiting turn 4 late in the race.

Something that you may not have noticed was the usage of superimposed sponsor banners on the catchfence in turn 2 during the race. There were a couple of occasions in which a superimposed Foxwoods Resort Casino banner was on the catchfence much like you sometimes see during NHL games. I don’t recall this being publicized as all, but don’t be surprised if you start seeing more of this, especially at flatter tracks.

Coverage-wise, Keselowski, Hamlin, Ryan Blaney, Kevin Harvick and a couple other drivers got the lion’s share of coverage Sunday. That said, there was a decent amount of coverage throughout the field. Surprisingly, NBCSN never did a Through the Field segment Sunday. I think there was one during the IMSA race on NBC prior to the Cup race, but none here despite an 83-lap run to the finish from the final restart. I don’t get that.

Post-race coverage was very brief since the race ended right up against the end of the time slot. Viewers got an interview with Keselowski on the frontstretch and some brief post-race analyst before NBCSN left Loudon for the Colorado Avalanche-St. Louis Blues game from Edmonton.

Overall, the Foxwoods Resort Casino 301 was more enjoyable than most of the recent Cup races in New Hampshire. It was more competitive and people weren’t glued to a single groove like last year. Honestly, it was a bit more like some of the races you’d see there in the late 1990s, complete with the long run at the end. The action was decent and NBCSN did well with what they got. They didn’t cover the tire issues that occurred as well as they should have, but I think the ongoing mess limits them to a certain degree. That said, they did make note of the air hose issue that hurt Joey Logano early on and covered how Hamlin’s team mitigated that before it could be an issue.

That’s all for this week. The upcoming week is going to be quite busy, but it was supposed to be even busier. The postponement of the INDYCAR doubleheader at Mid-Ohio Sports Car Course opens things up a little for NBC Sports, but it’s still going to be a crowded weekend.

The NASCAR Cup Series has a doubleheader at Michigan International Speedway. The Gander RV & Outdoors Truck Series will join on Saturday, while the ARCA Menards Series will be there Sunday. Meanwhile, the Xfinity Series will be at Road America for a standalone event along with Lamborghini Super Trofeo and the SPEED Energy Stadium Super Trucks.

Finally, SRO America will be back in action at Sonoma Raceway in California. All of their classes are scheduled to be in action. TV listings are available in the TV tab above.

We will provide critiques of the NASCAR Cup races from Michigan and the Henry 180 from Road America for next week’s edition of Couch Potato Tuesday here on Frontstretch. It should be an enjoyable time.

The Critic’s Annex is a bit of a tossup. Sunday saw the IMSA WeatherTech SportsCar Championship race live on NBC from Road America. I could cover that for the Annex since I watched it live (switching back and forth the final hour since that conflicted with Cup pre-race). However, part-time Xfinity Series driver Preston Pardus (who will drive DGM Racing’s No. 36 this weekend at Road America) just uploaded seven Goody’s Dash Series races from 1995 produced by Husqvarna Sports to YouTube Monday. I’m thinking of watching a couple of them and writing about it. Some familiar faces are there. Perhaps I’ll do both. You’ll just have to wait and see.

Whenever I hear about so-called tire wear problems I think of the tire scene in Days Of Thunder (I watched it once) where the crew chief compares two sets of tires, one set looked after and one abused. The one set was smooth and the other was destroyed. When a car pushes it takes out the right front. When a car is loose it takes out the right rear. Early in the race Baby Busch hit the wall with the right rear when his car pushed coming out of the corner and he kept turning left to keep it off the wall but when it grabbed the rear got loose and it caressed the wall. I wonder if there was any evidence of a cut in the tire or if it was from abuse.

After Baby Busch’s comments I don’t think that sponsor will be back.

if i recall, mars has previously warned baby busch about his comments.