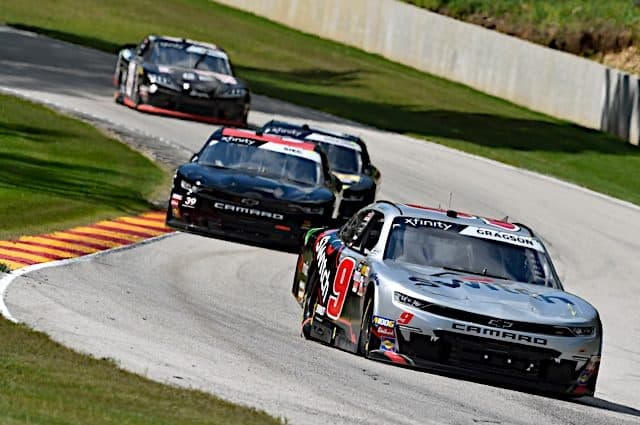 The NASCAR Xfinity Series tackles its second road course of the season this weekend at Road America.

The entry list for the event has 37 cars on the entry list; barring any changes, all cars will make the race.

Mike Wallace makes his second start of the season in the No. 0 for JD Motorsports with Gary Keller.

2011 NASCAR Cup Series Rookie of the Year Andy Lally will pilot the No. 02 for Our Motorsports.

Jade Buford, who made his Xfinity Series debut at the Indy Road Course, will drive the No. 6 for JDM.

MBM Motorsports has drivers shuffling seats this week. NASCAR Gander RV & Outdoors Truck Series competitor Jesse Iwuji will be behind the wheel of the No. 13 for his first Xfinity start, Stephen Leicht moves to the No. 61 car and Chad Finchum will pilot the No. 66 for the second time this season.

Jeffery Earnhardt slides from the No. 0 to the No. 15.

Preston Pardus will drive the No. 36 for DGM Racing; Pardus finished 10th at the Indianapolis Motor Speedway road course.

Scott Heckert will drive the No. 78 for BJ McLeod Motorsports, replacing Vinnie Miller. Heckert has run twice at Road America and finished 29th both times.

The NASCAR Xfinity Series take on the left and right turns of Road America on Aug. 8 at noon ET on NBC Sports Network.

Jared Haas joined the Frontstretch staff in May 2020. A graduate of Cedarville University in December 2019, Jared has been a Nascar fan since 2006. One of Jared's passion is recreating and creating Nascar cars for video games.
@RealJaredHaas
Previous Kris Wright Running for GMS at ARCA Michigan, Truck Daytona Races
Next Entry List: 2020 Michigan 200

Ryan Vargas, TikTok Team Up for Rest of Xfinity Season