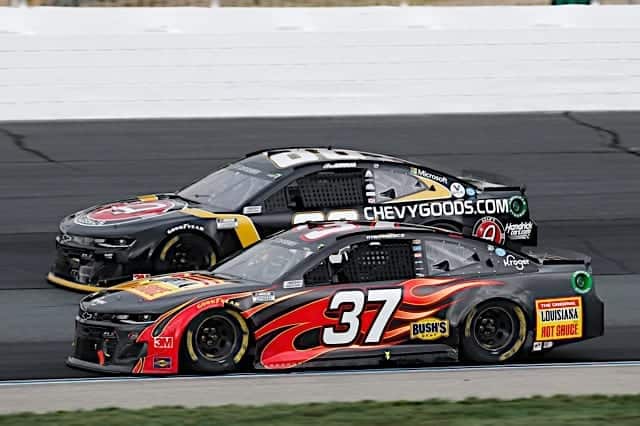 Brad Keselowski made it known early that he had a fast car, winning the second stage of the day and battling for the top spot with Denny Hamlin for much of the race Sunday (Aug. 2) at New Hampshire Motor Speedway. In the end, Keselowski held it for 184 of 301 laps, a race high, besting Hamlin for his third win of the season.

It wasn’t an easy victory, as track conditions changed throughout the day and there were worries about tire longevity on long runs. However, it was an impressive performance from Keselowski and the No. 2 team. They’re in great position to go deep in the playoffs that are now just six races away.

After a month of disastrous races capped off by a terrifying wreck, Ryan Preece sent out a reminder that he’s a capable racecar driver in his own right. After battling with the Hendrick crowd for position just outside the top 10 late, Preece lost a few spots in the closing laps, finishing 16th. That’s still a decent result for his team, which has struggled this year and had three last-place finishes in the previous four races. Preece has plenty of experience at NHMS as the 2013 Modified Tour champion. While it wasn’t one of his best tracks, that familiarity with the Magic Mile was evident in a nice recovery for JTG Daugherty Racing.

It’s been a long time, now, since I’ve been at Loudon. I grew up maybe 40 minutes away from the track, and it’s my home track, though New Hampshire hasn’t been my home for more than a decade. I attended my first car race of any kind in the summer of 1997 when I went to the Cup race.

I spent a few years making a different kind of racing memory than I do these days, and it made me realize that for race fans, the best part of any race you watch with the people who matter is the memory you carry. There are so many, always reminding me where I come from, and what the sport really means.

That first race taught me that the race isn’t always for the lead. Jeff Burton won that day (and a bunch more of the first events I saw), but what I remember is Dale Earnhardt’s performance. Earnhardt had a great car late in the race, and watching him come through the field, hunting them down and picking them off one at a time like some kind of predator, was what made me realize what I was seeing. He ran out of time to catch Burton, though he was working on it when the laps ran out. It shaped the way I have watched every subsequent race, hundreds of them now, in that I always look for races within the race. It may not be for the lead but a meaningful piece of the puzzle. That moment as a fan made me a better observer of racing and a better journalist as a result.

Pole sitter Aric Almirola has been a solid bet for a top-10 run in recent weeks. In fact, the last time he finished worse than 10th was at Martinsville back in June. Since then, he has been remarkably consistent, and this week, while there wasn’t enough speed to contend for the win, was no different. Almirola extended his top-10 streak to nine straight races with a solid seventh-place finish.

Point leader Kevin Harvick played the strategy game some, shaking up his pit cycles early and using that playbook to lead six laps. But he didn’t have the speed to back it up until the end of the race, roaring from the teens into the top five in the closing laps. He finished fifth and didn’t give Denny Hamlin a shred of momentum as the two continue to lead the pack of favorites staring down the playoffs.

Speaking of last Sunday’s winner Hamlin, he didn’t give an inch, either. Hamlin won the first stage and the playoff point that came with it, leading 92 laps. He and Keselowski staged a wicked battle for the lead on more than one occasion, and while Hamlin had to settle for second, his game hasn’t faltered. He looks more like a potential champion than ever before.

Reigning Cup champion and three-time NHMS winner Kyle Busch couldn’t get out of there fast enough. He got out pretty soon after a tire rub turned into a flat tire and the resulting crash ended his day dead last. Busch’s 38th-place finish is his fourth result outside the top 20 in the last eight races. He’s solidly in the playoffs on points right now, but will need to gain some momentum, and soon, if there’s any hope of defending his title.

New Hampshire has been a mixed bag over the years in terms of racing, and this one was its own microcosm of that. The finish was lackluster because a long green-flag run allowed Keselowski to get away from Hamlin enough that Hamlin couldn’t quite run him down, though he shaved a second off the No. 2’s lead in the final 20 laps.

But there were plenty of battles to be had for most of the day. Keselowski and Hamlin’s fight for the lead mid-race was long and hard-fought. Jimmie Johnson and Almirola put on a show as the laps wound down. Harvick ran down a lot of cars to score his top five, and he did it with laser precision.

So, while the finish will hardly go down as the best of 2020, the race, as a whole, won’t go down as the worst. NASCAR used the lower-downforce package it’s brought to the shorter tracks this year, and that paid off with the kind of event that fans of an entire race should appreciate.

Oh, hello, playoffs. You’re so close, all of a sudden. Provided there are no changes to the schedule for the last 10 races, the title run kicks off Labor Day weekend at Darlington Raceway, a short five weeks down the road on the calendar.

Oh, and in the four weekends between now and then, there are six more regular-season races, including two double-header weekends. There’s also a race at a track where nobody has ever raced a Cup car and very few have competed on in any vehicle. Oh, plus there’s a superspeedway where just about anyone can snatch a playoff spot in the 11th hour.

Buckle up, Buttercup. August is going to be the Dog Days, indeed.

For that matter, how is that even a question? The free pass came about as a compromise after NASCAR realized the danger in racing back to the caution at many tracks. But there’s a loophole in the rule that should have been yanked shut on day one: a driver who loses laps due to a penalty from NASCAR is somehow still eligible to get those laps back.

It happened again this week. Erik Jones was penalized a lap for pitting outside the box, only to be rewarded with the free pass 11 laps after serving the penalty.

So, NASCAR essentially tells teams, “Hey, we’re taking a lap here, but don’t worry, just be the first car a lap down and we’ll give it right back.”

Penalized drivers should not be given the free pass during a race. Rather, it should go to the first driver a lap down who didn’t get there for breaking the rules, leaving the penalized to either race their way back or use wave-arounds or other pit strategies to climb back into contention.

Otherwise, what, exactly, was the penalty?

I like your comments about the races with a race. Fans who have been around the sport for a while know that the best racing is often not at the front of the field. At this part of the season, there’s drivers who are hungry, drivers who are desperate, and drivers trying to play it safe. That makes for some interesting battles. I wish the broadcasters showed more mid-pack racing.

And how many times have we seen a driver who lost a lap from a pre-race penalty get the free pass during the competition caution or a caution before that?

The problem wasn’t the lackluster racing, so much as it was lack of a second groove, which in the past has enabled the scenario you describe in ’97 when Earnhardt was trying to catch Jeff Burton. Ditch the PJ-1 for crying out loud!

It’s always seems to be a one groove track when they use that glue.

i’ve got it….a new name for the pj1 they’re putting down…..poop1 as it turns racing into a stinker.

i call that stuff pbj.