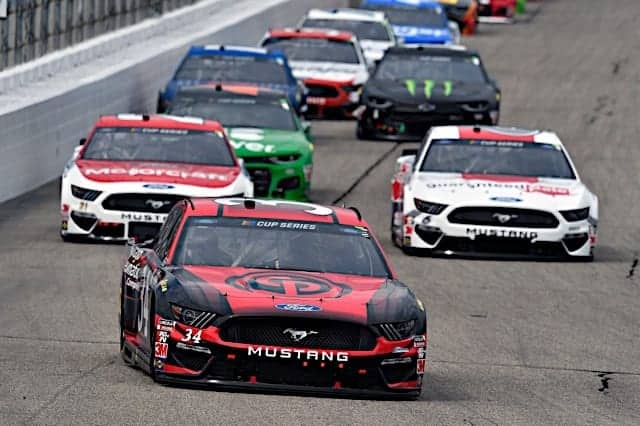 Michael McDowell has been a frequent visitor to the top 20 this season, but he barely squeaked in this past Sunday at New Hampshire Motor Speedway.

McDowell spent the majority of the race hovering around the 25th position. He finished 26th and 25th in the first two stages and was still in 25th in the closing laps of the race. But McDowell came on late, and as other cars’ handling went away, the No. 34 Front Row Motorsports Ford took advantage. By the time the checkered flag waved, McDowell was in 19th position, his second straight top 20 at NHMS.

“It was certainly a tough day for our No. 34 team today at New Hampshire Motor Speedway. We didn’t fire off exactly how we had hoped, but we consistently made good improvements to the car and ended up with a top-20 finish after running around the 25th position for a majority of the race. I can’t thank Drew [Blickensderfer, crew chief] and my guys on pit road enough for all of their hard work to improve our car all race long. A big thank you to Chicago Pneumatic Compressors for joining our No. 34 team today for their first race in the NASCAR Cup Series. I’m looking forward to having them back on board with us in a few weeks for the road course race at Daytona.”

No one. Underdog drivers don’t necessarily need to finish in the top 10 to warrant an “atta boy,” but I think finishing in the top half of the field is a fair requirement. Since no one else did so, this category is essentially blank.

I really expected better than a 22nd-place finish out of Bubba Wallace. He had been on the upswing lately and runs well at tracks like New Hampshire that feature long straightaways and tight corners. But it just wasn’t his day. Not to mention McDowell’s FRM teammate John Hunter Nemechek put his top 20-capable car in the wall when a tire went down. Nothing honorable about that.

The Xfinity Series and Gander Outdoors Truck Series were both off last week. It’s difficult for underdogs to finish at the front when there is a race, but it’s impossible when there isn’t one.

The NASCAR Cup Series teams are off to the Motor City (or rather, close to it) for a doubleheader at Michigan International Speedway. With action both Saturday and Sunday afternoon, one might expect it gives the less able-bodied teams double the opportunity to do well. I’d actually say it gives them two chances to flounder in the back. MIS is a horsepower track, and if there’s anything that our heroic underdogs lack, it’s raw speed.

Also hitting the track in Brooklyn, Mich., the prognosis for the Xfinity and Truck groups is about the same. So while I’d love to see a good story up near the front this weekend, odds will be better one week further down the line. Still, stranger things have happened. After all, last year’s Truck event saw several leaders get tangled up in a crash just a few laps from the end. The attrition opened up spots in the top five at the end for both Tyler Dippel and Austin Wayne Self.

Turning a few virtual laps around @NHMS in the No. 34 #ChicagoPneumaticCompressors Ford Mustang! pic.twitter.com/uVO67BLa8J

Fought hard today with my @StarcomRacing team. Thanks @Permatex for being onboard with us! Onto Michigan! #z00m pic.twitter.com/8jNWZevrJ3

Youth and diversity! Love to see it!✊? https://t.co/HjZK6toeKo