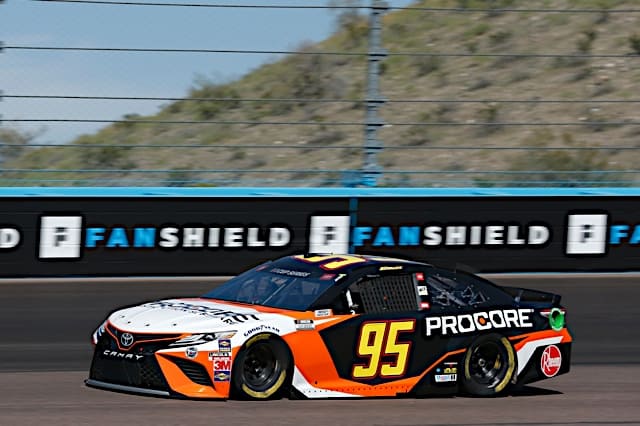 Did You Notice?: No. 95 Sale Clear Warning About NASCAR Financial Trouble From COVID-19

Did You Notice?… Bob Leavine has sold his No. 95, family-owned NASCAR Cup Series team less than two years after switching to Toyota and partnering with Joe Gibbs Racing? Christopher Bell will be running elsewhere in 2021 as financial conditions created by COVID-19 made it impossible for this team to continue.

What’s notable is the new owner didn’t purchase any actual equipment. Since Leavine Family Racing was getting all their chassis and engines from JGR, all those parts go back to their rightful owner. No cars were involved in the purchase of this sale; just the guaranteed spot in the Cup field (charter), race shop building and other assorted inventory.

That means the purchaser is almost certainly someone who’s already established at the Cup level. Sports Business Journal’s Adam Stern is reporting the buyer is Spire Motorsports. If so, that’s discouraging, as Spire has never put forth the financial resources to be competitive. Their team, besides a rain-shortened, one-in-a-million upset win at Daytona International Speedway with Justin Haley, has no other top-15 finishes in 76 Cup starts. Their current operation is run on a shoestring budget, often in association with funded drivers, and appears to have no long-term plan to change that. Remember… buying LFR doesn’t mean buying their better-running cars.

But what should be more concerning to NASCAR fans, owners, anyone involved in the sport’s long-term future is what Leavine said about his finances. A Tuesday (Aug. 4) media availability gave a small window into what NASCAR sponsorship is like in the age of COVID.

“We are going to be lucky to sell $50,000 worth [of sponsorship] for the rest of the year,” Leavine said. “Big companies are going bankrupt. They can’t invest in something that has no more return than what they are going to get – during a pandemic.”

$50K just isn’t going to cut it for a series that takes $10 million plus to be competitive. And that’s for a team that’s got one of the sport’s rising stars in Bell, paired with JGR support.

You can imagine what it’s like for others without pre-signed sponsorship for 2021. Even then, a signed contract isn’t worth more than the paper it’s signed on if the company itself declares bankruptcy. Just ask Travis Carter, whose NASCAR ownership group fell apart the second Kmart collapsed in early 2002.

That financial impact will be limited on the sport’s upper class. Owner Roger Penske, for example, has a net worth estimated at $1.7 billion. Losing tens of millions, potentially, to keep his three NASCAR teams running for a year is an expense he can outright afford. Penske is already accepting a loss at his new purchase, Indianapolis Motor Speedway; the Indy 500 will run without a single one of 350,000 potential fans in the stands. That decision alone will cost him, and the speedway, more than a year’s worth of NASCAR primary sponsorship.

But there’s only a handful of owners in NASCAR’s upper class. Penske and Gene Haas for Ford. Rick Hendrick for Chevrolet. Joe Gibbs for Toyota (whose team is valued at $230 million). They’ve got cash reserves they’re willing to lose.

Everyone else? No sponsorship (or a dramatic reduction) could torpedo their race team. Even Richard Childress Racing applied for a PPP loan during the COVID-19 suspension. NASCAR’s entire middle class could be in jeopardy unless the sport finds a way to cut costs.

Leavine, understanding the economic headwinds, had some suggestions of his own. But he made it clear Tuesday NASCAR was unwilling to listen.

“When NASCAR came out and gave our marching orders going forward. I think that was in early May, before we started back racing,” Leavine said. “I had lobbied for a lot of things to change in NASCAR with a lot of owners and was very disappointed in what came out of that meeting. I knew that was probably going to be the straw that broke our back….

“We just can’t continue to put money in an operation and run. The secret is to run competitively and the way we want to run. Can we run next year and just get on the track and do some things and prolong the agony? Yes, we could have. Did we want to do that? Total agreement from us, no, I didn’t get in here just to run.”

This moment should be a wake-up call for the sport. Aside from Bubba Wallace, there’s no buzz surrounding new Cup sponsorship for 2021. How can there be? It’s impossible for corporations interested to justify spending several million dollars during COVID-19.

Remember all that at-track hospitality they used to get? Impossible in the middle of social distancing and no fans allowed. In-person visits with drivers? Commercials? Special appearances? All off the table in a world where people can’t gather in large groups.

This harsh reality has even Hendrick Motorsports reported to be considering contraction with Jimmie Johnson’s retirement. It’s a tough situation mixed with bad timing as more costs (NextGen car) are coming soon after any 2021 recovery.

Of course, continued erosion of the sport’s middle class replaced by backmarker teams just running around, many laps behind the leaders, doesn’t do anyone any good. NASCAR can’t just be a rich man’s game during and after COVID-19, a point Leavine seemed to want to make more pointedly before stopping short.

“Today, it’s a bad taste in my mouth to be perfectly candid, and that’s the only thing I’ve ever told you all.”

To be fair, there are plenty of people working to offer solutions to this problem. People within NASCAR truly believe the NextGen car and its model will be the answer to cutting costs long-term. But the pandemic strips bare how easy it is for Penske, Hendrick, Gene Haas and Gibbs/Toyota to spend however much they want in order to win. If more money equals more speed, they have to be willing to tone down costs in order to allow others to remain competitive.

Until that happens, and there’s buy-in from all sides, Leavine, Barney Visser of Furniture Row Racing and plenty of other independent owners will stay a step behind the curve.

A Daytona 500 champion told me 7 years ago this was going to happen.

I’m doubling down on this: reduce the cost, return the value to the sponsors, replenish the grid, create jobs for talented drivers. Parker gets it https://t.co/p0gM0AbjNh

The author of Bowles-Eye View (Mondays) and Did You Notice? (Wednesdays) Tom spends his time overseeing Frontstretch’s 30 staff members as its majority owner. Based in Philadelphia, Bowles is a two-time Emmy winner in NASCAR television and has worked in racing production with FOX, TNT, and ESPN while appearing on-air for SIRIUS XM Radio and FOX Sports 1's former show, the Crowd Goes Wild.
@NASCARBowles
Previous Waid’s World: The 2020 Season – Ain’t Never Seen the Beat of It
Next Indy 500 Without Fans Is Right Decision For IndyCar