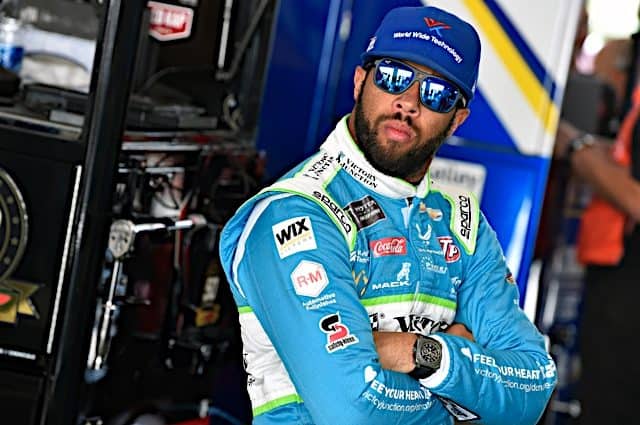 2-Headed Monster: Should Bubba Wallace Go to Ganassi or Become an Owner at RPM?

The silly season is finally here, and with each passing day there is a little more news that trickles out that helps us know what the NASCAR landscape is going to look like in 2021. One of the more interesting rumors that was reported on this past week was the rumor about Bubba Wallace‘s future for 2021 and beyond.

According to several reports, Wallace is a candidate to take over the No. 42 Chip Ganassi Racing Chevrolet in the NASCAR Cup Series. That ride was vacated by Kyle Larson after he was fired during the COVID-19 pandemic for saying a racial slur during an iRacing event. Since then, the car has been piloted by Matt Kenseth, who came out of retirement to take the ride at Ganassi. It’s assumed that Kenseth will not be back with the No. 42 next season, instead going back into retirement. That means that the organization will have to fill that seat, and Wallace’s name has surfaced as a major candidate for that ride.

.@BubbaWallace and his reps are exploring his team options for 2021, and while a return to @RPMotorsports is one of them, another possibility that’s emerged is with Chip Ganassi Racing and @McDonalds, per sources.

➖ Both CGR and Wallace share McDonald’s as a common partner. pic.twitter.com/2Vv9mq9jE0

Additionally, Forbes reported this week that Richard Petty Motorsports, Wallace’s current ride, has offered him an ownership stake in the No. 43 Chevrolet to stay with the organization. Some reports have the percentage in the range of 10-20%, with co-owner Andrew Murstein confirming that Wallace has been offered a stake in the team. Rarely does a team go to this lengths to keep a driver, and having an ownership stake in an organization would mean long-term benefits for him.

It’s a tough situation for the Mobile, Alabama native. Does he stay with the organization that has seen him grow over the last three years? Does he take the deal and become a part owner of a Cup Series team, something that few people get an opportunity to get? Or does he drive the No. 42 Chevrolet for Chip Ganassi Racing and put himself in a better opportunity to win races in the short term?

A driver wants nothing more than a chance to prove himself in good equipment. For Bubba Wallace, moving to the No. 42 car would be the opportunity he’s waited for his whole life.

He could stay at Richard Petty Motorsports (RPM) and have a nice long career, but he would always be wondering about what if. What if he took a more competitive ride at Chip Ganassi Racing (CGR)? How would his career be different if he went to CGR rather than staying at RPM?

Look at what the No. 42 team has done recently. It was an extremely competitive car with Kyle Larson behind the wheel. Larson won six races with that team in his last four full-time seasons. Wallace’s current ride, the No. 43 car at Richard Petty Motorsports, hasn’t visited victory lane since July 2014.

It’s also important to consider that Chip Ganassi Racing gets their engines from Hendrick Motorsports. They are arguably the second-best organization in the Chevrolet camp. There’s no question Wallace would have an opportunity to prove himself.

I understand that all it takes is two or three bad years to be out of a ride and for a career to be over. I also understand a team can struggle due to circumstances entirely out of a driver’s control but which can result in that driver losing their ride. A bad three-year run at CGR could see Wallace forgotten about, just like many other drivers before him. But a better chance of success outweighs many of the negatives.

Chip Ganassi Racing has something that Wallace has never had in his Cup career: a teammate, and a former champion at that. Veteran Kurt Busch has over 700 starts and 31 career victories to his name. Who better to learn from than a driver with a mountain of success?

Richard Petty Motorsports is a solo car operation that is just competitive enough for a young driver looking to prove themselves as a solid racer in the Cup Series. That’s exactly what Wallace has done in his tenure with RPM. He has proved that he can be consistent racer and has shown flashes of what he could be in a solid ride.

I believe that is the ceiling for Wallace at Richard Petty Motorsports. It’s time for him to take the next step in his career. Being an owner isn’t what it used to be, and Wallace would likely receive little in monetary value with a stake in the team.

Unless RPM gets a ton of funding, tightens its alliance with Richard Childress Racing (or with another organization for that matter) or significantly improves, it would be a chore for any driver, let alone Wallace to make the playoffs. Is that really what he wants to do that for the rest of his career? If all he wanted was a stable income, that might be enough. But Wallace is a racer, and the potential to win races and be a perennial playoff contender is too good of an opportunity to pass up. – Clayton Caldwell

Big Picture Racing with a Look to The Future

Bubba Wallace and the No. 43 team have started showing signs of consistency and increased performance since wider discussions of racism thrust the group into the spotlight two months ago. After a miserable 2019 that saw the King’s Camaro perpetually finishing 25th or lower, it seems like things are now heading in the right direction for Wallace in his ascent through the NASCAR ranks.

Wallace will be 27 years old when the 2021 season starts after having a rocky road to the Cup Series. He’s nowhere near over the hill yet and still has about three to five years before most drivers find the right stride with a capable team. But he’s in an interesting position: Wallace has had the spotlight shone on him, making his name more recognizable than this year’s Daytona 500 winner. It would make sense to see Wallace looking for a championship-winning ride – but is there a better option?

Prior to the events at Talladega this year, RPM co-owner Andrew Murstein made a comment stating he’d gladly sell the team if a buyer came along with the right offer. With Wallace serving as the face of the sport, there’s money out there now. He’s the guy that sponsors want to be partnered with. If the trajectory of Wallace’s career has shown anything, is that NASCAR is a business that can be cruel and unforgiving, particularly if your team isn’t attracting any sponsorship.

With Wallace as part of the ownership group, coupled with his position as the only African-American driver in the largest racing series in North America, he’d be joining the ranks of the next generation of NASCAR ownership. Richard Petty is 83. Roger Penske, 81. Jack Roush, 74. Joe Gibbs, 72. The names and faces we’ve become familiar with over the last 30 years aren’t getting any younger, and the reality of time will dictate new ownership and names to carry the sport on for the next 30-40 years.

Richard Petty Motorsports hasn’t built its own cars for almost 10 years now, having purchased them from Roush Fenway Racing when the organization was with Ford, and now Richard Childress Racing since it moved to Chevrolet. However, interest from new manufacturers and upcoming changes to the rules package mean that the future of NASCAR will be rife with unpredictability. Teams who have participated in the sport for years might have an advantage against the new teams with teething problems.

The short-term gain of getting a new three- or four-year deal with a top-15 team might seem like the culmination of a professional body of work. But given the transitions that will be coming in 2021, I’d look beyond the potential of a few top 10s by partnering with an existing team of any caliber for the long term. It’s time to think big and to invest in a team for the future.

Besides, then Wallace doesn’t have to worry about getting rid of that No. 43 tattoo he got last year. – Vito Pugliese

Clayton has been writing NASCAR for the last seven years and has followed the sport for as long as he can remember. He's a Jersey boy with dreams of hoping one day to take his style south and adding a different kind of perspective to auto racing.
@cgcaldwell89
Previous Eyes on Xfinity: Alex Labbe Having Career Year, Putting Additional Emphasis on Month of August
Next Entry List: 2020 VizCom 200