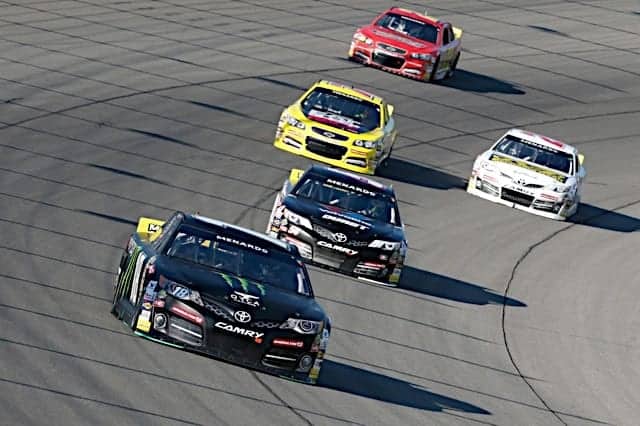 After a doubleheader at Toledo Speedway, the ARCA Menards Series will head to the 2-mile Michigan International Speedway for the VizCom 200. It marks the 11th race of the 2020 season and the 39th race at Michigan.

Eighteen drivers are entered for this race, including defending race winner Michael Self. Last season, Self won after Ty Majeski unsuccessfully attempted to stretch his fuel mileage to snag the victory. Self is the only competing driver who has won at this track in Brooklyn, MI.

In addition to his win there last season, Self finished third at Michigan in the 2018 race. His championship lead has shrunken to seven points, so he could use another exceptional race to maintain his position at the top of the field.

The only other two drivers who will be competing in this race to have at scored least one top-10 finish are Bret Holmes and Riley Herbst.

Holmes has plenty of momentum as he seeks to usurp Self for the points lead. He currently has five straight top-five finishes including his first win at Kansas Speedway.

Holmes has made three starts at Michigan, accruing two top fives with a best finish of third place last season. Because there will be no qualifying, the starting lineup will be set via owner’s points – which means Holmes should start this race in fourth place, right next to Self.

Drew Dollar has never competed at Michigan before. Although he is in third place in the championship standings, he is 40 points behind Self which means Dollar needs a strong run to narrow that gap.

Piloting the No. 20 Venturini Motorsports Toyota will be Ryan Repko. He is making his fifth and final start of this season. The 20-year-old has two runner-up finishes this season at Talladega and Kansas. In a previous ARCA Zoom call, he stated he has not signed a deal with TRD for next season, so his future prospects are currently up in the air. But winning the VizCom 200 certainly would be a phenomenal way to cap off his season – and a way to draw some more attention to him skills.

In addition to Venturini Motorsports, Toyota will have an excellent chance of winning the VizCom 200 with Herbst driving the No. 18 Joe Gibbs Racing Toyota. He has made three ARCA starts at Michigan with a second-place finish in the 2018 race.

Additionally, Herbst competed at Michigan last year in the NASCAR Xfinity Series race. Unfortunately, after starting 30th, he crashed out of the race on lap 12 and finished 37th.

Herbst will compete in the Xfinity Series race at Road America the previous day (Saturday, Aug. 8) before crossing Lake Michigan to compete in this race.

Ford is the only manufacturer without a win this ARCA season. DGR-Crosley fields two full-time entries for Hailie Deegan and Thad Moffitt. Both drivers are making their first career starts at Michigan. Deegan and Moffitt are fourth and fifth, respectively, in the championship standings.

“It’s just kind of guessing how the setup will be. We’ll figure it out when we get there, although we won’t have a ton of practice,” Deegan said in a team release. “We’ll try to get a decent setup and get a good finish. Being consistent and not making mistakes is so important, along with the car’s setup.”

Their teammate in the No. 17 DGR-Crosley Ford is Anthony Alfredo. Alfredo competed at Michigan in the 2019 NASCAR Gander RV & Outdoors Truck Series. He finished in 26th place due to a DNF after 96 of the 105 laps.

In an ARCA Zoom call on Wednesday (Aug. 5), Alfredo stated his goal in this one-off reunion with DGR-Crosley is to win the race.

“There is internal pressure,” he stated, noting the No. 17 entry is running full-time for the owners’ championship. “I’m excited to go race at Michigan and I have put pressure on myself to win.”

“If I go win, [DGR-Crosley] may let me race more,” Alfredo said with a laugh.

Although none of the three DGR-Crosley drivers have competed at Michigan in an ARCA race before, Alfredo is confident they will work well together, especially after practice when they can relay information about the handling of their respective race cars.

Sam Mayer won the Toledo doubleheader, but he is ineligible to compete in the VizCom 200 due to a minimum age limit of 18 at Michigan. Making his ARCA Menards Series debut in the No. 21 GMS Racing Chevrolet is Kris Wright.

Wright competed in the ARCA Menards Series West doubleheader at Utah Motorsports Complex, where he finished second and third, respectively. This will be his first ARCA start on an oval.

“Get up to speed [during practice],” Wright said. “Get me comfortable in eight to nine laps of the race. Finish every lap in the race, keep my nose clean.”

Furthermore, Wright abides by one phrase when he climbs into a race car.

The results, he repeatedly stressed, will appropriately follow suit.

The last time the winner of the ARCA race at Michigan started outside the top 10 was Tim Steele in June 1997. Six different drivers have won thus far this season.

The VizCom 200 will take place on Sunday (Aug. 9) at 1 p.m. ET with TV coverage provided by MAVTV and also broadcasted on TrackPass on NBC Gold.