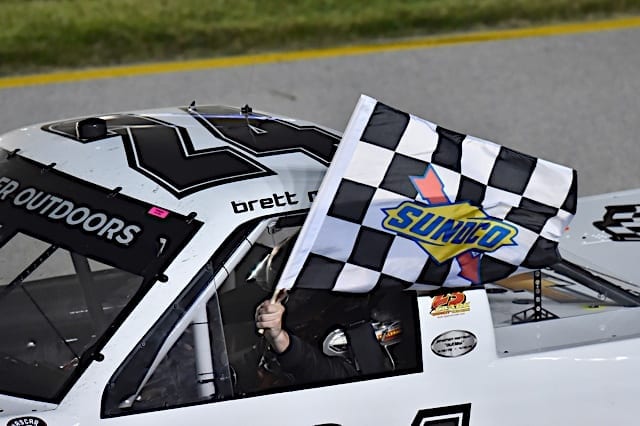 What if I told you that that same driver has a Truck Series championship and has taken an upstart Xfinity Series team and made it one of the more competitive teams in the series? What if I also told you that this driver has never run a full season in the Xfinity or Cup series, and aside from a handful of races has never driven in top level equipment in either series?

Yet that is not the case.

This driver is the forgotten free agent. As silly season picks up and several drivers names are tossed around as possible additions to competitive teams, this driver, with a Truck championship and 11 series wins never has his name mentioned to get a good opportunity in Xfinity or Cup.

His statistics are incredible. His 11 Truck victories have come in just 69 career starts, which puts him at a better winning percentage than Truck legend Ron Hornaday Jr. Even Hornaday had a shot in the Xfinity Series and Cup series, yet our forgotten free agent hasn’t gotten the call.

Maybe he is comfortable with his place in NASCAR. After all, he’s with one of the most competitive Truck teams in the business, and that’s not a bad place to be. Still, you have to wonder, what if? What if he ever got the opportunity that others have gotten?

Think about the drivers who have recently been moved up to the Xfinity Series from the Truck Series. One driver that comes to mind is Noah Gragson. Gragson’s two-year run in the Truck Series was OK; he was able to finish second in points in 2018. However, he won just two races with arguably the best race team in the division, Kyle Busch Motorsports. His performance in 2018 was nonetheless enough to get him an Xfinity ride for JR Motorsports, one of the top organizations in the division.

Harrison Burton got the call up from Joe Gibbs Racing this season. Burton, a 21-year-old second generation driver, finished 12th in Truck Series points in 2019 for KBM. That was enough to earn him a promotion to the Xfinity Series.

Burton and Gragson are just two examples, but there are countless other drivers who have gotten an opportunity to drive for competitive Xfinity Series teams who don’t have nearly as strong of a resume as our forgotten free agent.

If you haven’t figured it out by now, our forgotten free agent is Brett Moffitt.

Moffitt has two things working against him. One is that he doesn’t seem to have a major sponsor attached to him. Sponsorship is the key to everything. Moving forward after the COVID-19 pandemic, sponsorship is going to be an even bigger factor.

While a lot of the names previously mentioned have some sort of revenue attached to them for one reason or another, Moffitt doesn’t. He has had to rely strictly on his skills. While that may be all you need in any other sport, for Moffitt, it’s not enough. That’s obvious, because his statistics speak for themselves.

The other major thing Moffitt has going against him is he does not have a development deal like many other drivers mentioned. He did once, but that situation quickly went away.

In the K&N Pro East Series, Moffitt was a superstar. He ran five full-time seasons in the division, winning 10 races and finishing in the top three in points all five seasons. He outran a number of drivers who have had more opportunities than him.

In 2014, he got a chance to drive seven races in the Cup Series for Premium Motorsports. The first race, however, was the most impressive. He drove a Michael Waltrip Racing-prepared Toyota to a 22nd-place finish in his Cup debut at one of the toughest tracks on the circuit, Dover International Speedway.

From there it didn’t look like he had much happening. But then Brian Vickers developed blood clots, and Moffitt was tabbed to fill for a few races in the No. 55 Cup car in 2015. He finished an impressive eighth at Atlanta Motor Speedway and drove with the organization through Richmond Raceway. After Richmond, he was replaced in the No. 55 car by David Ragan, who was running for the points championship at that point. Moffitt took over Ragan’s original No. 34 Ford at Front Row Motorsports and stayed there for the remainder of the year.

After the season, MW folded and Moffitt’s development deal with the organization went down the tubes. It looked like his career was all but over.

However, he resurfaced again in a substitute role when he got tabbed to drive the No. 11 Toyota for Red Horse Racing in the Truck Series. Its regular driver, Matt Tifft, had medical issues and had to miss a few races. Moffitt filled in and impressed. He was able to win a race at Michigan International Speedway before Tifft returned to the seat to fill out the year.

Red Horse Racing hired him full time in 2017, but the team closed after just five races and Moffitt again was out of a ride. He ran a few races in the Cup Series in 2017 and was hired to drive the Hattori Racing Enterprises No. 16 truck in 2018.

He flourished, winning six races and the championship before being replaced by Austin Hill, who was able to bring funding that was needed to keep the team competitive. Before last year, Moffitt was hired at GMS Racing and won four races and finished third in the standings. This year, he returned to GMS Racing and after a slow start sits fifth in the standings. It’s only a matter of time, though, before he finds victory lane again.

With everything he has been through and the amount of success he has had, it’s a crime Moffitt has not gotten an opportunity yet. If his name is not mentioned in any big-time opportunity, know it’s because he doesn’t have the funding, not because of skill.

Because of that, he is NASCAR’s forgotten free agent.

Unfortunately, lack of a recognizable last name and a silver spoon sponsorship have doomed him.

At least we have perpetual underdogs Chastain and DiBenedetto getting some opportunity in equipment they deserve.

This is a prime example of a failed business model. If he is destined to stay in Truck or Xfinity, I hope owners will do the right thing and keep him in competitive equipment.

Such a shame. He is my favorite driver.