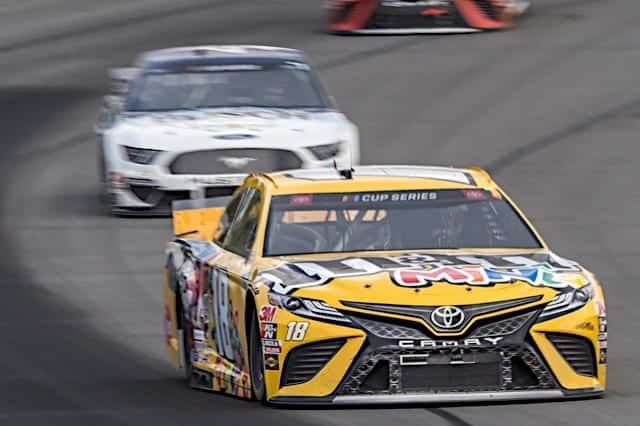 Now less than 100 points above the cutoff, is it possible that Kyle Busch misses the NASCAR Cup Series postseason?

Jared Haas: There is a possibility for everything, but Busch will make the postseason. He has scored 15 points or fewer in six of the first 20 races, or 30%. With only six races remaining, it averages out to about two races with a bad finish. Busch has a big enough lead to secure a spot in the playoffs. The No. 18 team should be cautious but not concerned about its chances. Collapses into the playoffs do happen, but major collapses, which the No. 18 would have to have to miss the playoffs, are rare.

Zach Gillispie: Yes. Two more DNFs for the two-time champion will put him right on the cutline. However, the chance of Busch not making the playoffs is slim, but it all depends on the drivers right around the cut line. If Tyler Reddick, William Byron and/or Matt DiBenedetto are able to turn up the wick in the coming weeks, we might see a No. 18 playoff absence.

Christian Koelle: No. In the six races remaining, there are only two races where someone outside the cutoff line could spoil the show, meaning four drivers will make it via points. Both Daytona International Speedway events (road course and superspeedway) have the potential to have new winners. Busch is the cream of the crop of the playoff drivers without a win, and he’ll never drop like a rock. The odds of him picking up a victory in the final six races is more than him falling out of the playoffs.

Should NASCAR change the way starting positions are determined — and if so, how?

Gillispie: The easiest way to fix the tiered-draw dilemma would be to bring back qualifying, which NASCAR has notably vetoed. With that off the table and several grumbling drivers still in tow, NASCAR has put itself in a box. As to what the solution is, it will still be another gimmick, since the sanctioning body has pretty much said it is going to determine the grid artificially. However, it is apparent the tiered draw has not been received well by the drivers, and the fans, too, seem to have mixed reactions. NASCAR can try to create a new method, but at what cost will it have for consistency’s sake and overall perception? The best advice for NASCAR would be to eat some crow and bring back standard qualifications.

Koelle: Yes, bring back qualifying and practice. Heck, we tried one-day shows a while back, why can’t we do it now? It’s not like there are three different crews and drivers at the track to limit the spread now, so might as well go back to the old way of doing things and call it a day. Otherwise, make the starting order set by championship points, then owner’s points set those rides without drivers in points. That’ll make points racing more interesting.

Kristl: Yes! This is my proposal for the NASCAR Cup Series starting lineup:

Haas: Yes, NASCAR needs some more variety with its lineup. The fastest lap from the last race can be an acceptable way to line them up. Another way is to have a full field random draw instead of a group of 12s. Aric Almirola has started on the pole three times and second three times in a row. Headlines would be interesting if someone from the top 12 in points had to come from deep in the field instead of always starting up front.

Are you surprised Brad Keselowski only got a one-year extension? What does it mean for his future?

Koelle: That’s the way the cookie crumbles now. One-year deals are better than long term deals because, like in baseball, a long-term deal is pointless unless you are confident that a person will win. That’s the way it’s going to be. Long-term deals just don’t make sense anymore since the minor leagues are overflowing with talent. Chandler Smith, Christian Eckes, Harrison Burton, etc., all of these drivers will be knocking at the door soon.

Kristl: Surprised, perhaps, but I understand why. This pandemic has forced everyone, including NASCAR team owners, to tighten their belts in terms of spending. Roger Penske may have given Brad Keselowski a one-year extension due to a decrease in sponsorship or an assurance he can command a larger salary next year. From Keselowski’s perspective, it is a guarantee of a top-tier ride next year while keeping his options for his future, such as a ride at Hendrick Motorsports, available.

Haas: No. It is a down year for everyone in NASCAR. Keselowski is looking for a contract to fit his needs. He seems content at Team Penske but would likely pounce at an opportunity at a new team. This contract with Penske gave him the flexibility to continue to look for a ride for the 2022 season. Keselowski could get the contract that he wants with Penske or another team for 2022. Keselowski’s 2021 contract is the equivalent of an MLB player accepting a qualifying offer.

Gillispie: Unfortunately, one-year deals seem like the norm nowadays, at least for the time being. Thus, surprise would not be the proper term here. However, Keselowski seems to be the first Cup champion to sign one. If you look at the evolution of his career, Keselowski has transformed himself from a brash and rambunctious character to a much more calculated and reserved family man. It is certainly plausible that retirement would not be out of the question in the coming years, as he seems to be in a really good place, with a business on the side. Penske probably won’t show him the door, but the once-fiery competitor seems to have slowed down a lot.

After no COVID-19 clusters were identified from Bristol Motor Speedway, should more tracks open for a limited number of fans to attend?

Haas: Yes. The trial run went as well as it could for a first run of having a race in the pandemic. There can be improvements from what happened at Bristol, but having fans at races could work. I felt safe when I went to the All-Star Race. If tracks follow the protocols for COVID-19 like what their local governments have in mind, tracks can have a successful weekend without any issues. Tracks that feel they are safe to have fans should have fans. If tracks that are in hot spots of pandemic do not want fans, that would be acceptable, too. Safety is number one and the product is number two.

Gillispie: That is a question that neither NASCAR nor the tracks should answer. If local government and health officials give the tracks the green light, give it to them. If they don’t, they don’t. Let the professionals determine it. But at the end of the day, accountability is shared by everyone from the fans, to the health officials, to NASCAR. Of the tracks that have had fans in the stands during the pandemic, there was a stark contrast between those who were extremely cautious and those who weren’t. Once again, the fans, the officials and NASCAR all play a huge role in the safety of these events.

Koelle: Yes. Bristol is not the only track to have successful events. Iowa Speedway and Road America both had successful deals with social distancing for the NTT IndyCar Series, and New Hampshire Motor Speedway looked to do way better than others. It’s time to stagger fans back in the stands, because we’re at a point where other sports are doing it, so if we don’t then those fans may go elsewhere — and then in the long term, we lose fans. If you place the proper precautions and enforce them, what more would you ask for?

IF YOU FOLLOW KYLE LARSON’S SEASON IN SPRINT CARS, ALMOST EVERY TRACK THEY RACE AT HAS ALMOST A FULL HOUSE OF RACE FANS. UNLESS LOCAL GOVERNMENTS FORBID IT, OPEN THE STANDS !!