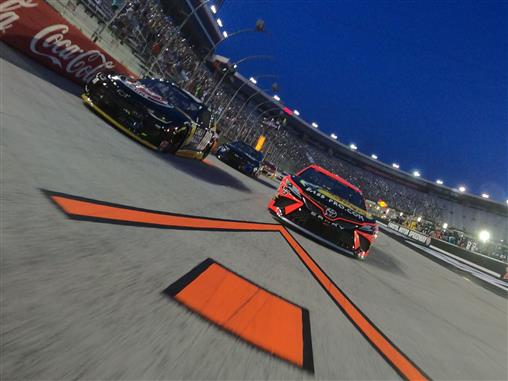 NASCAR is adapting a choose rule on restarts across all three of its national series except for at superspeedways and road courses, the sanctioning body announced Aug. 6.

Beginning with Friday’s (Aug. 7) Gander RV & Outdoors Truck Series race and Saturday’s (Aug. 8) Cup Series event at Michigan International Speedway, all drivers will be permitted to choose which lane they would like to use to restart the race. Drivers must choose either the inside or outside lane by a designated point on the track.

The rule was first tested during the July 15 NASCAR All-Star Race at Bristol Motor Speedway, where an orange v was painted on the track which drivers had to drive left or right of to select their restarting lane. Previously, drivers have attempted to slow themselves on pit road to try to land in the optimal restarting lane. The introduction of the choose rule eliminates that necessity.

“It will essentially look the same,” Scott Miller, NASCAR svp of competition, told NASCAR.com. “There will be a few subtle differences to handle wave-arounds and free passes and a full field of cars, which we didn’t have at the All-Star event. But it will look very much the same. It will be exactly the same up front, but just some subtleties to handle wave-around, free pass and things like that.”

In an Aug. 6 press teleconference, Brad Keselowski addressed the introduction of the rule and was hesitant to see it introduced so quickly.

“There are parts I really like about it. There are parts I don’t so much like about it,” Keselowski said. “I really would like to get some reps on it and then take it from there. I was probably a little more hopeful that it would go to a lower series first and they could work the bugs out, but that’s OK. I don’t know what I don’t know and that’s what makes me most nervous.”

The Truck Series will be the first to test the new format in a points race at Michigan in the Henry Ford Health System 200 Friday (Aug. 7) at 6 p.m. on Fox Sports 1.

Doesn’t this feel like Emperor Brian is still making the decisions?

In theory, this sounds good on paper. Wonder how long it will take for our friend “Unintended Consequences” to show up.

I must be missing something. This applies to restarts after cautions, right? Everyone comes out of the pits just like they do now in whatever order they finish their pit stop. Granted richer teams have faster pit stops so they tend to be the front runners more than not. Still, if a poor team finds a way to get out quicker they will still have the same choice/opportunity as the rich team to pick whatever lane they want.
So, how does it favor the rich teams? What am I missing?