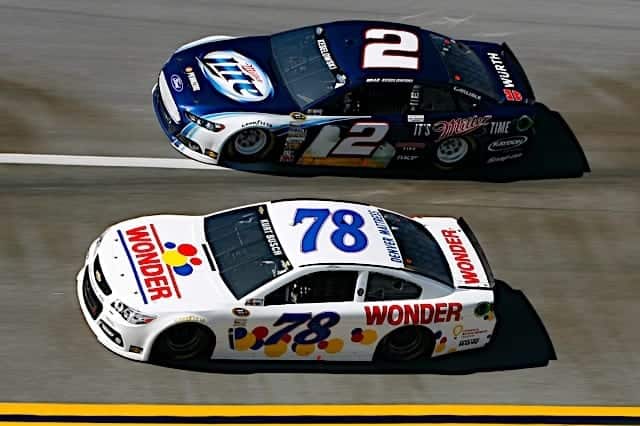 Aug. 4 marked the 14th anniversary of a particular 2006 film to feature racing.

Two months ago, June 9, also marked the 14th anniversary of another particular 2006 film to feature racing.

One is a PG-13 comedy, the other a G-rated animated film, but both quickly cemented their place in the racing film subgenre and have endured to this day.

Cars and Talladega Nights: The Ballad of Ricky Bobby are wildly different films when it comes to the movies themselves, of course, but their impact was substantial when it comes to connecting the NASCAR world to theater audiences. Both were released within two months of each other in the summer of 2006, quickly becoming arguably the two most popular racing films ever made. It was the first time films about NASCAR had had such a broad appeal – and in the same year, no less.

That broad appeal is reflected in the box office numbers – Cars made $462 million at the ticket booths, calculating out to roughly 71 million tickets sold. The sequels each made more than $350 million each, with Cars 2 bringing in a whopping $562.1 million. Talladega Nights brought in $163 million, more than doubling its budget.

Cars brought the appeal of an animated kids movie with a central message, as most Disney or Pixar films are, plus the leading voice acting talents of Owen Wilson, Paul Newman and Bonnie Hunt.

Talladega Nights infused a NASCAR-centric plot with the popularity of Will Ferrell, John C. Reilly and a solid supporting cast that included Sacha Baron Cohen, Michael Clarke Duncan and an early-career Amy Adams. The film marked McKay’s second feature film and second hit, after partnering with Ferrell for the 2003 comedy Anchorman: The Legend of Ron Burgundy. Ferrell was already riding a wave of popularity after his time on Saturday Night Live and starring roles in a number of features, most notably Elf and Anchorman.

Industry cameos further link the movies to the NASCAR world and are a little easter egg for the racing fans who watch these movies, cameos that might sail over the heads of non-NASCAR viewers.

Cars features Richard Petty in a prominent role, of course, as Strip “The King” Weathers, along with actor and racer Paul Newman as Doc Hudson. Bob Costas and Darrell Waltrip show up as booth announcers, while Humpy Wheeler, Lynda Petty and Dale Earnhardt Jr. round out the NASCAR-related cameos. Michael Schumacher, Mario Andretti and Jay Leno also lent their voices to the film.

Meanwhile, Talladega Nights is full of cameos as well – Waltrip, along with Mike Joy and Larry McReynolds, make several appearances in the booth while calling Ricky Bobby’s races. Earnhardt, Greg Biffle and Jamie McMurray make up the driver cameos, with the latter losing at Texas Motor Speedway to Ricky Bobby when Bobby drives by in reverse (flipping the bird at McMurray as he does it). Heck, even director Adam McKay, Elvis Costello and Rob Riggle show up.

Simply looking at the statistics online is a telling revelation. Cars surpasses 300,000 ratings on IMDb and the same number of watchers on Letterboxd, while Talladega Nights boasts 163,000 on the former and nearly 100,000 on the latter. Meanwhile, Days of Thunder, for instance, has just 77,000 IMDb ratings and only 26,000 user watches on Letterboxd.

Regardless, both films – Talladega Nights especially – continues to be quoted by even non-NASCAR fans. “Shake and bake,” “If you ain’t first, you’re last” and “I’m the best there is, plain and simple. I wake up in the morning and I piss excellence” have become iconic.

For Cars, “turn right to go left” has more or less become the longstanding quote, along with a few of McQueen’s catchphrases.

Both films rank in my top eight-or-so racing movies of all time, but they remain a landmark in the connection between the sport and general audiences who might not otherwise pay attention to NASCAR.

Kurt Busch has been the biggest proponent of Talladega Nights’ legacy within the sport itself, driving a pair of schemes styled after the film’s cars. Busch drove a Phoenix Racing entry at Talladega in 2012 styled after Ricky Bobby’s “ME” No. 62 cougar car, following that up at the fall 2013 race with sponsorship from Wonder Bread with Furniture Row Racing in homage to the movie.

Oddly enough, only one NASCAR scheme promoted Talladega Nights’ release, and it wasn’t even a Cup car, but rather a Craftsman Truck – Bill Lester’s No. 22 Bill Davis Racing entry sported a scheme similar to Bobby’s Wonder Bread car at Kentucky a full month before the film’s release.

Cars, meanwhile, had two promotional schemes in the 2006 Coca-Cola 600, nearly two weeks before the film hit theaters. Scott Riggs and Tony Raines drove cars sporting the movie’s logos, Riggs’ car more or less his normal Valvoline scheme, albeit with Lightning McQueen and Strip “The King” Weathers on the hood with the Cars logo. Raines got the better end of that deal, his No. 96 fully painted like McQueen’s No. 95 Rust-eze car in the movie. Somehow, Riggs’ was the one that got a diecast made; Riggs also drove a scheme later in the year to promote the DVD release of the film.

More on schemes that promoted movies in a later article.

Cars managed two additional sequels – the dismally awful Cars 2 and the relatively decent Cars 3. According to an article I dug up while Googling around, director McKay and star Ferrell had an idea for a sequel to Talladega Nights and distributor Sony wanted a follow-up, but McKay apparently preferred to focus on original ideas. He and Ferrell (and Reilly) teamed up two years later for the hilarious Step Brothers, and both that and Talladega Nights have become centerpieces of the actors’ filmographies.

McKay transitioned to more serious (but still humorous) movies as his career went on, directing The Big Short and Vice in 2015 and 2018, respectively. He netted himself an Oscar for best adapted screenplay at the 2016 ceremony for the former, and Vice scored an Academy Award for best make-up and hairstyling a few years later.

The director also upped the star power even higher in those movies – The Big Short boasts a quartet of lead actors (Brad Pitt, Ryan Gosling, Christian Bale and Steve Carell), with several irreverent, fourth-wall-breaking cameos thrown in – Margot Robbie, Anthony Bourdain among them. Bale, Carell and Adams again teamed up with McKay for Vice, with Sam Rockwell, Tyler Perry and Alison Pill making up some of the supporting cast.

Ferrell and Reilly’s careers have been relatively quiet as of late. The pair teamed up for the critically lambasted Holmes and Watson, but they’ve mostly been on separate paths. Ferrell’s most recent endeavors have mostly been comedic efforts that received poor or lukewarm receptions (Eurovision Song Contest: The Story of Fire Saga, Daddy’s Home 2, The House). Reilly, on the other hand, has delved into smaller films that were more well-received (The Lobster, Stan & Ollie, The Sisters Brothers), and also had a supporting role in the surprisingly entertaining Kong: Skull Island in 2017.

For Talladega Nights, though (and Step Brothers, too), the pair were magic.

Neither film is without their flaws, and Talladega Nights admittedly feeds into NASCAR stereotypes, but both are their own encapsulations of the sport itself and have endured as titans of the racing movie subgenre. Making $625 million combined (in other words, selling nearly 100 million tickets), the two summer 2006 movies brought NASCAR – and racing in general – into the spotlight and to movie-going audiences everywhere.

Awww, love both of those movies!