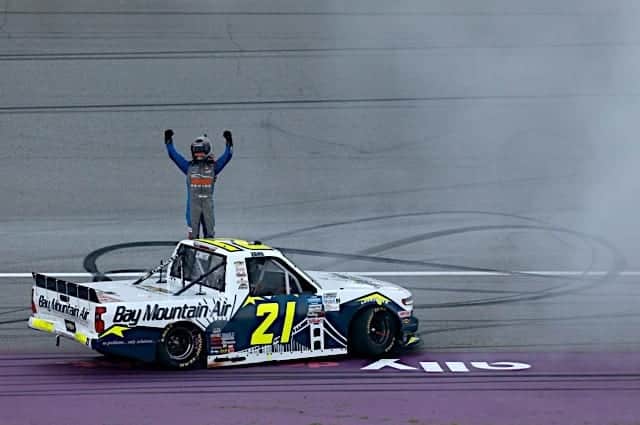 He led one lap, but it was the one that counted. Zane Smith is officially a winner in the NASCAR Gander RV & Outdoors Truck Series.

The Henry Ford Health System 200 at Michigan International Speedway was all about survival and Smith was in the right position at the right time to collect his first career win.

Smith restarted fifth on a double-overtime restart, but when leader Grant Enfinger got spun in front of the field, it was Christian Eckes and Tanner Gray who suddenly shot to the lead with Smith closely in tow.

SO. MUCH. HAPPENED.@GrantEnfinger got spun while defending the lead on the restart! pic.twitter.com/vTNdTYMzJV

After NASCAR elected to not throw the caution for both Enfinger’s spin and another incident involving Trey Hutchens due to darkness approaching, Smith quickly scooted around Eckes and Gray on the final lap and sprinted away to the finish.

“I can’t thank everyone enough,” an emotional Smith told Fox Sports. “A lot of people don’t understand my situation with racing. It’s unbelievable that I’ve made it to this point.

“I wish I was here to celebrate with my parents and my girlfriend. This is tough to take in. It was fun racing with all my best friends, Christian Eckes there at the end. Just an unbelievable day.”

While only 39 trucks were on the grid due to Spencer Davis‘ withdrawal earlier in the week after he tested positive for COVID-19, trouble was already brewing in the inspection tent prior to the event.

An L1 penalty was accessed to the ThorSport Racing No. 13 entry and driver Johnny Sauter after the rear of the truck failed NASCAR’s requirements in pre-race technical inspection. Sauter, who is on the wrong side of the playoff cut line, was docked 10 precious championship points and lost crew chief Joe Shear Jr. for the event.

Once the inspection woes were ironed out, it didn’t take long for NASCAR’s brand new choose cone rule to be used for the first time in points competition following a fourth lap caution for Hutchens and Josh Reaume.

Brett Moffitt and his fellow leaders navigated the procedure successfully, but it did become somewhat problematic behind. An indecisive Codie Rohrbaugh and Tim Viens were penalized for running over the painted choose indicator box. Gray and Tate Fogleman incurred similar penalties later in the event.

After Moffitt won the first stage, it was Sauter who took stage two. Successfully rebounding from his pre-race misfortunes, the No. 13 took the lead on lap 28 after then-leader Raphael Lessard had to pit under green with a flat right rear tire. Once he got to the front, Sauter looked poised to stay there.

When the stage breaks were in the rear-view mirror, fenders began to be crumpled. A Michigan record 11 cautions flew during the event. A Lap 50 melee took out some heavy hitters when Stewart Friesen got turned head-on into the wall by Eckes. Among those collected was World of Outlaws NoS Energy Drink Sprint Car Series star David Gravel, who was in the midst of making just his second career pavement start and first in the Truck Series. Gravel rebounded to finish 10th.

Tempers later flared after polesitter Chandler Smith chopped Ben Rhodes on the frontstretch, prompting a retaliatory move from Rhodes farther down the track as he sent Smith for a wild slide. Smith would finish 38th after making significant wall contact.

When the chaos looked to be subsiding on the run to finish, Sauter’s luck ran out in a megalithic way. While battling his teammate Enfinger for the top spot and potentially the first win of his season, he lost control of his truck and spun into the outside wall in Turn 2.

On the other end of the spectrum, Gray held on to finish a career-best third ahead of Tyler Ankrum and Todd Gilliland. Moffitt was sixth, followed by Lessard. Derek Kraus finished eighth while sliding across the finish line backwards. Parker Kligerman and Gravel rounded out the top 10.

The Trucks will return to action on Sunday, Aug. 16 for the inaugural event at the Daytona International Speedway road course. The green flag is scheduled to fly at 12:15 p.m. ET with TV coverage provided by FOX Sports 1.

Exciting race, right down to the checkered flag. Several caution flags that were not necessary for spins that the driver kept his truck going straight. Except for the end with no caution flag while trucks sitting dead on the track. How about using the penalty box for obviously hooking a truck twice on the front stretch. And what’s up with that ridiculous late starting time. Maybe in June not in August.

Jill P
Reply to  Tom B

I would have to agree about the inconsistent cautions. I was afraid they weren’t going to finish the race because it was getting dark. Hope there are no red flags or rain delays for the Cup races or they’ll be dealing with the same problem.