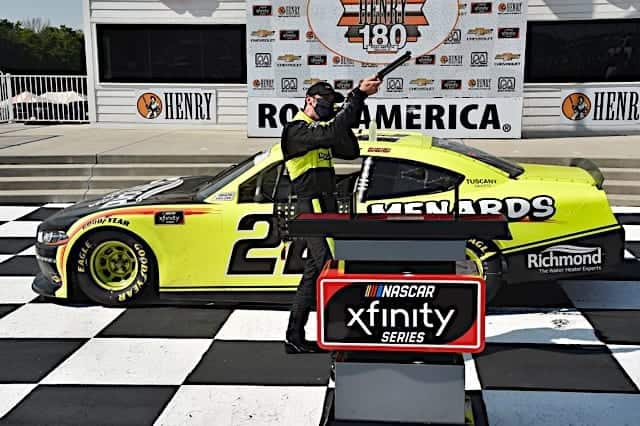 You may have needed an umbrella, but the Henry 180 belonged to Austin Cindric.

After storms soaked the 4-mile Road America circuit, the sun was on full display as Cindric crossed the finish line for his fourth NASCAR Xfinity Series win in 2020.

On a two-lap shootout, Cindric passed Preston Pardus and held off AJ Allmendinger on to add another road course trophy to his shelf. After leading 19 of the 45 laps contested, Cindric becomes the 11th winner at Road America in as many races.

The biggest competition was indeed the weather, with rain and lightning hoovering around the track throughout the afternoon. Storms rolled in shortly after the race commenced and per NASCAR’s policy, the red flag was displayed on lap 10 after lightning was reported within 10 miles of the track.

Once the 93-minute red flag was lifted, rain continued falling. As rain tires were bolted on, the circumstances played directly into the hands of many road course ringers with significant wet weather experience. Andy Lally spearheaded a spirited charge through the top 10 before the first stage break, but was unable to catch eventual stage victor Justin Haley.

Once the track dried out, it was Allmendinger who took control of the race. He was aided by Noah Gragson and hometown hero Josh Bilicki, who both went off course ahead of Allmendinger. Bilicki led several laps but surrendered the lead to Gragson shortly before the pair made their simultaneous mistakes allowing Alex Labbe to go through to the lead.

After quickly dispensing Labbe, Allmendinger picked up the Stage 2 victory while under caution for a stalled Jesse Little, who got stuck in the Turn 1 gravel trap with two to go in the segment.

Unfortunately for Allmendinger and his Kaulig Racing team, they got snarled by NASCAR’s new modified pit rules for standalone events. With the new protocols, teams had to decide whether to take tires or fuel the car since they were not allowed to take both at the same time.

This allowed Justin Allgaier and Kaz Grala to cycle to the point. Allmendinger was forced to make two separate pit stops under caution for normal service. Because they pitted to shed their rain tires under green before Little’s problems, Allgaier and Grala became the new leaders after pitting only once for gas.

However, it was Cindric who made quick work of the front pair and opened up a sizable lead before a decisive caution flew for Scott Heckert‘s stalled Chevrolet with six laps to go.

On the ensuing restart, a massive crash eliminated the late hope of several drivers after Allgaier was punted out of line, collecting Jeremy Clements, Jeffrey Earnhardt, and Myatt Snider.

Tune in for this late restart on NBCSN! pic.twitter.com/plb932PVED

Behind Cindric and Allmendinger, Chase Briscoe rallied to a strong third-place finish. The top five was rounded out by Grala and Lally.

The NASCAR Xfinity Series is back in action at the Daytona International Speedway road course on Saturday, Aug. 15. The green flag is scheduled to drop at 3:00 p.m. ET with TV coverage provided by NBCSN.

Leave it to NASCAR to screw up an otherwise decent race with bizarro pit rules that require secret decoder ring to understand. Maximum and minimum pit-stop times of 60 or 80 seconds… Pit crews can only change tires or fuel the cars depending on whether it’s under green or under caution… Huh? Listen, when I sit down to watch a race with a beer or two, I’m not bringing a stopwatch and a scorecard to to the sofa. When you add those rules to the mostly-reasonable rules for when and how you call run the rain tires, it was just too much for this ol’ bubba. Otherwise, I thought the racing was pretty good at Road America.