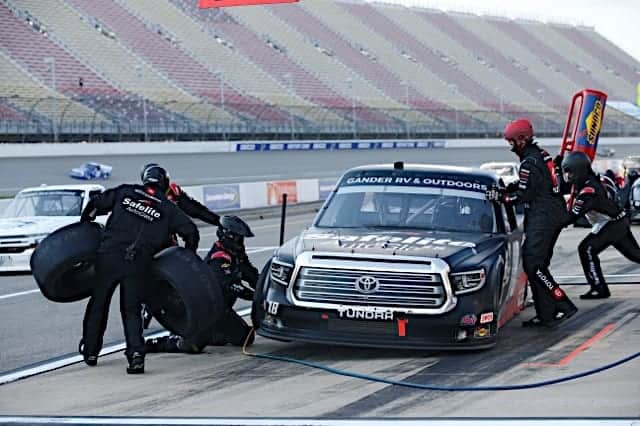 Entering the NASCAR Gander RV & Outdoors Truck Series race at Michigan International Speedway, rookie Christian Eckes led laps in each of the past three races. Additionally, he finished second twice, at Texas Motor Speedway and the second race of the Kansas Speedway doubleheader.

In his second career start at MIS, Eckes began the Henry Ford Health System 200 on Friday (Aug. 7) in third, but spun on lap 14, bringing out the second of a Truck Series track record 11 cautions in this race.

“We started off OK,” Eckes said in a post-race Zoom call with media. “I got loose out of nowhere. I did the same thing last year so I guess I’ll have to go back and figure out why that happened. It kind of put us behind for the rest of the day.”

Eckes failed to score any stage points, but his Kyle Busch Motorsports team continually adjusted his No. 18 Toyota. However, on lap 51, he again was involved in a caution. To make matters worse, he then was penalized on the subsequent restart for being in the wrong position on the restart.

Eckes stayed on the lead lap. The record amount of cautions gave him ample opportunities to regain that track position.

“We got a couple good restarts there at the end,” Eckes noted, before elaborating on the difficulties he overcame at the 2-mile track. “But we constantly fought track position and dirty air. Our truck was horrible in dirty air.”

The implementation of the choose cone allowed Eckes to make his way up to the front and contend for the win.

“I felt like it always worked out for me so I guess it was [situation-dependent],” he added. “I did think a lot of people chose the top throughout the race so it made the top dominant. As far as the choose aspect, we were able to hopscotch and get a few positions on the bottom because of that.”

On the second overtime restart, Eckes grabbed the lead after Grant Enfinger spun due to contact with John Hunter Nemechek and Austin Hill. When the white flag flew, ensuring the next flag ended the race, Eckes was in first.

White flag is out! The @safelite Tundra of @christianeckes leads!

An unbelievable drive to the lead for @zanesmith77!

A PERFECT pass gave him the lead on the last lap. pic.twitter.com/atVkuGY00y

“We finally got a shot there at the end. I guess he got a better run than I could,” Eckes said. “I went too high and he just drove around me like I was standing still. It’s three second-place finishes the past three weeks. It’s frustrating as hell, but we’ll move onto Daytona [International Speedway road course].”

Eckes admitted some happiness for his friend Smith winning for the first time but repeatedly used the word frustrated to describe his emotions of yet finishing one position shy of breaking through for his first win.

“[I’m] happy for Zane but still pissed about the outcome. Or frustrated or whatever you want to call it,” Eckes continued. “This one definitely is going to hurt the most out of the three we’ve had. Zane’s a good buddy so happy for him but have to go back and figure out why we got beat like that. I’m just frustrated right now so we’ll move on.”

With five races remaining in the Truck Series regular season, Eckes ranks third in the championship standings, 43 points behind Hill and 79 points above the playoff cut line. Last year, Kyle Busch Motorsports failed to put either of their full-time drivers in the playoffs.

“We’re just bringing faster trucks [to the track],” Eckes said of the uptick in the organization’s performance. “We’re unloading OK and I’m getting better. It’s a culmination of those three that have helped us out the most. I’m just super frustrated; we need to be a bit better.”

Heading into the inaugural race at the Daytona International Speedway road course, Eckes has three top fives and six top 10 finishes this season. He has momentum with those three second-place finishes in the last four races, too. However, he left Michigan frustrated with the runner-up finish.

“I’m sure there are some positives to this like how we fought back but I just can’t see them right now,” Eckes stated. “Like I said, we’ll just move on. I had an OK truck today and finished second.”