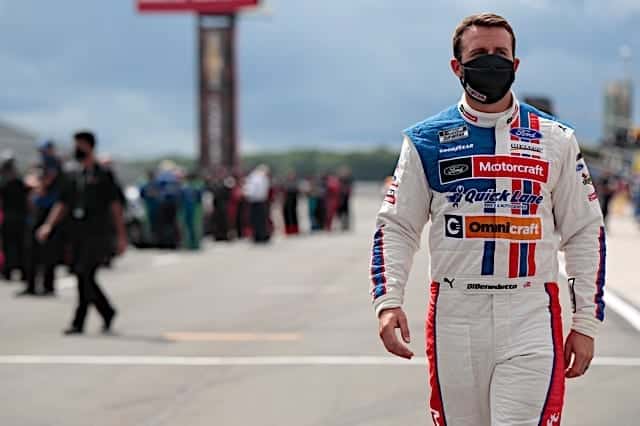 After the spring race weekend was postponed due to COVID-19 concerns, NASCAR has finally returned to the Irish Hills of the Michigan International Speedway.

Instead of two NASCAR weekends this season at MIS, it will be condensed into one. Because of this, the two annual Cup races will now be back-to-back in a doubleheader weekend format.

These Cup races will be 156-lap, 500 kilometer races. Typically, they are 200-lap, 400 mile race. Michigan is always an interesting track when it comes to strategy; with how big it is, there are plenty of opportunities for drivers to save fuel. Combined with tire wear — meaning little traditionally — and teams usually stretch just how far a car can go if there’s a long green flag run to end the race.

Also, with only 0.1 points awarded for each lap led by a driver, the need for a dominator is less important when building a winning lineup. The 156-lap races will have a total of 15.6 points up for grabs in this category. Take note when building your roster and focus on mid-pack competitors who can climb up toward the front on race day.

Here are a few drivers to keep an eye on for the races this weekend.

Note: this article uses the prices for Saturday’s race. Prices for Sunday may fluctuate based off the results of the first Cup race of the weekend.

It’s time for Keselowski to get that first Cup win at his hometown track.

The 2012 Cup champion has been close, earning five career top three finishes, but hasn’t been able to pull it off. Keselowski is in the middle of a career season, with just one finish out of the top 20 through the opening 20 races of the season and is on pace to break his own personal records in a number of statistical categories.

While it’s fair to say that Kevin Harvick has been the best overall Ford this season, Keselowski has emerged as the undisputed second best at worst.

Busch has one career victory at Michigan International Speedway. That came back in August of 2011.  Since then, Michigan has been a trouble track for Busch at times, as evidenced by his terrible average finish mark for somebody in this price range. But “Rowdy” has turned a negative into a positive, entering this weekend riding a streak of six straight top 10 finishes at the two-mile oval.

Busch started the 2020 season off pretty bad, being 11th in points as recently as the conclusion of the Pocono Raceway weekend in late June. While the results still haven’t started catching up yet for the No. 18 Toyota, the team seems to have found some speed at Texas Motor Speedway last month. Bad luck has continued to weigh Busch’s results down since, but history says that won’t last forever for the two-time Cup champion.

Somebody with this average finish at this price? What a steal, especially considering that Elliott’s Hendrick Motorsports stablemate Alex Bowman won at Michigan’s sister track, Auto Club Speedway, earlier in the season.

Elliott began his career at Michigan with three straight runner-up finishes. While Elliott has failed to match that mark in the seasons since, his overall consistency makes him a very solid pick for any fantasy team, and arguably the best Chevrolet driver in the Cup field.

There’s a very simple reason for why I’ve got DiBenedetto on my team: he knows it’s time to go.

The Wood Brothers Racing driver is currently a free agent for next season. Look at the landscape of this market, now that Erik Jones has officially joined the class and with Team Penske’s Austin Cindric lighting it up in the NASCAR Xfinity Series. Those are some big names that teams are going to be considering over the next two months.

While DiBenedetto has improved results for the Wood Brothers, that might not be enough, especially with how close the team is with Penske. DiBenedetto seems to be a driver that does his best with his back against the wall, as evidenced by last summer. Let’s see if he can get back in that head-space over the next month.

Wallace hasn’t been that impressive at Michigan, but his improved performance this season makes him an easy grab at this price. A driver with an average finish around 20th at this tier is a pretty easy pick.

One big thing Wallace probably has now is confidence. Regardless of what happens the rest of this season, Wallace is on-pace to have a huge offseason and is guaranteed to have a solid Cup ride next season. A confident driver is a good driver, and a driver without that much to lose, both from a career perspective and a practical perspective (his only reasonable avenue to the playoffs involves winning a race), can be a scary spoiler. Even on a team as small as Richard Petty Motorsports.