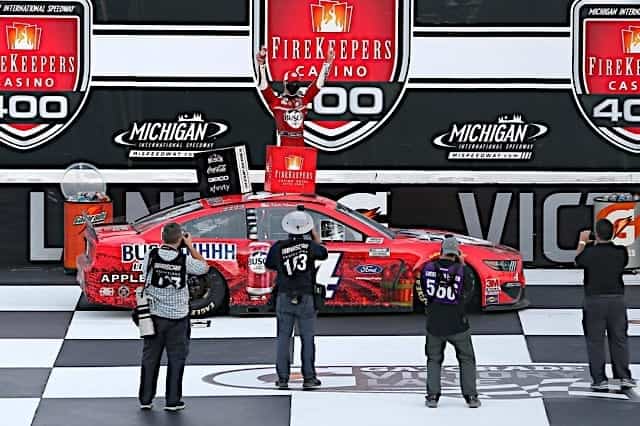 Michigan might be known for automotive manufacturing, summer tourism and college football, but the FireKeepers Casino 400 was all about Kevin Harvick.

While it was not complete domination, it sure was close after the No. 4 Stewart-Haas Racing Ford was out front for 92 circuits of the 161 laps in the NASCAR Cup Series contest. It marked Harvick’s fifth victory of the season and fourth career checkered flag at Michigan International Speedway.

The 44-year-old retook the lead for the final time after jostling Kyle Busch from the top spot with just nine laps to go. While Busch dropped backward after skimming the wall perpetuated by the skirmish, Harvick had to vigorously fight off the field on two late restarts, including a feverish charge from Brad Keselowski and Chase Elliott in overtime.

“I kind of showed my hand there a little bit early when I passed (Elliott) on the outside, but I knew that didn’t need to happen to us,” Harvick told NBC Sports. “A lot of restarts, you’re relying on a push and (Elliott) was a good pusher. I just had to keep him from going by us.”

The victory provided several milestones for Harvick, including putting him back into a tie with Denny Hamlin for the most wins in 2020. Additionally, it marks Ford’s fourth consecutive victory at the automaker’s home track. The win also ties Harvick with Lee Petty for 11th on NASCAR’s all-time wins list.

“I can’t say enough about our whole organization,” Harvick added. “Our Ford guys do a wonderful job of the details on our racecar, but since we’ve come back from COVID, the work these guys and gals put in at the race shop are good. They’ve got a lot of really good training from Tony Stewart and  in situations to prepare for things.”

Polesitter Joey Logano led the way up until the competition caution. Hamlin was briefly out front following the stoppage, but Harvick swept the lead away and went on to double his stage wins in 2020 by winning both segments.

Tire problems crept up throughout the day. Rookie Tyler Reddick, who recently announced he was returning to Richard Childress Racing next season, was one of the unlucky ones, having to pit twice under green flag conditions. The first was perpetuated by restart contact with Martin Truex Jr. While Truex was also forced to pit too, Reddick came in for service again later in the contest with severe cording issues.

Six cautions for incident slowed the action, three of which were brought out by John Hunter Nemechek. The No. 38 was originally sent for a harmless spin through the infield grass after contact with Chris Buescher. Several laps later, Nemechek had a nearly identical slide after cutting down a tire and then spun into the Turn 3 wall with 25 laps remaining, ending his dismal day prematurely.

After the second Nemechek incident, Busch elected to not take tires, beating Harvick off pit road. However, Busch was only able to hold the lead for one lap under green before the No. 4 rocketed by. Harvick held the lead until Elliott was able to use NASCAR’s new restart choose rule, passing Harvick on the inside line.

Elliott’s choice proved to be pivotal for both the No. 9 car and later Busch on the following restart, as they were both able to get past the leader.

After nudging Busch out of the way, Harvick had to fend off the field on restarts following several late cautions, but drama erupted mid-pack which drew two late cautions with under eight laps to go. Among them was a multi-car crash involving Austin Dillon, Michael McDowell and Ryan Newman which prompted the overtime finish.

Keselowski held on to finish second in front of Truex. Ryan Blaney and Busch rounded out the top five.

Harvick will try to defend his win in the second half of the doubleheader at MIS on Sunday (Aug. 9). The green flag for the Consumers Energy 400 is scheduled to drop shortly after 4:30 p.m. ET. TV coverage will again be provided by NBCSN.

Due to the tiered field invert to determine Sunday’s starting lineup, Buescher will start from the pole after finishing 20th in Saturday’s event.

Nice racing for a 44 year old. He sure knows how to do a TV interview. Very professional without sarcasm.