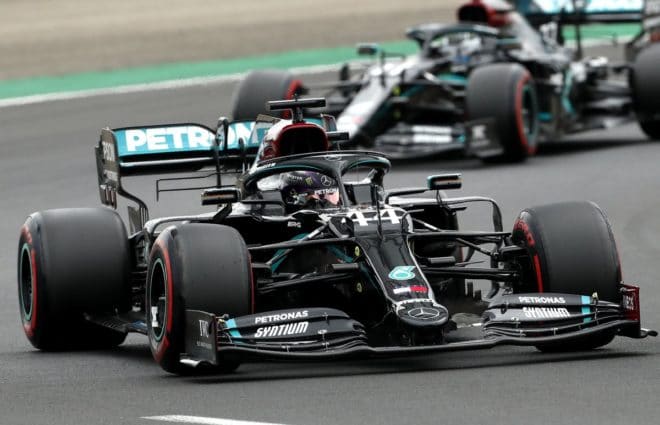 In season that has been dominated by Lewis Hamilton, it seems only one man has been able to outpace the defending world champion. Hamilton’s own Mercedes teammate scored the opening pole and victory in the season opening Austrian Grand Prix, but since then, Valtteri Bottas has struggled.

A blown tire last time out at Silverstone and a dreadful start at Hungary, Bottas looks to get back into form as Formula 1 returns for a second kick of the can at Silverstone.

With a time of 1 minute and 25.154 seconds, Bottas scored his second pole of the young 2020 season, edging teammate Hamilton by less than half-a-hundredth-of -a-second. Hamilton’s time clocked in a 1:25.217, lining him up second come Sunday (Aug. 9).

After a heartbreaking race last week, Racing Point relief driver Nico Hulkenburg has responded in the best way possible. The German set a time of 1:26.082 to line him up third alongside Red Bull Racing’s Max Verstappen.

Daniel Ricciardo and Lance Stroll start together in row three, with Pierre Gasly and Charles Leclerc making up row four. Alexander Albon and Lando Norris round out the top 10.

A few other notable qualifications: Sebastian Vettel will lineup 12th, continuing his struggles in 2020. George Russell will lineup 15th in his Williams entry, showcasing his strong ability to get the Williams team off the back row of the grid. Daniil Kvyat will lineup 16th, a shocking nine places back of his teammate.

Meanwhile, the back row of the grid will be comprised of both Alfa-Romeo Racing cars.

In FP2, the top two would switch as Hamilton edged out Bottas by 0.176 seconds. Ricciardo would rebound for the third fastest time, with Verstappen and Stroll completing the top five.

FP3 was topped by again by Hamilton with Bottas in second 0.163 seconds behind. Norris would have the third quickest time, as Hulkenburg and Stroll rounded out the top five.

Racing Point has been blasted with a 15-point penalty following the investigation lead by the FIA into their brake ducts. The British outlet has been accused by nearly half the grid of copying Mercedes’ 2019 car, and in addition to the points, they will be ordered to pay 400,000 pounds in fines. A new rule change is currently under review that will prevent “reverse engineering” for future teams.

Nicolas Tombazis, head of the FIA’s investigation said that, “We do plan, in the very short notice, to introduce some amendment to the 2021 sporting regulations that will prevent this becoming the norm. It will prevent (teams) from using extensive parts of photos to copy whole portions of other cars in the way Racing Point has done.”

Valtteri Bottas will remain at the silver arrows in 2021. The Fin announced on August 6 that Mercedes was working on a deal to keep him on as the team’s second driver.

“I’m very happy to stay with Mercedes in 2021 and build on the success we’ve enjoyed together already” Bottas told BBC News. “The past few years have been all about continuous improvement. I’m confident that today I’m the strongest I’ve ever been, but I can always raise the bar.”

The lights for the 70th Anniversary Grand Prix will go out Sunday and look for the Mercedes to have their hands full as they look to keep their perfect win streak alive in 2020.

Alex has been writing in the motorsport world since he was 19. Starting his career with the NASCAR Pinty's Series, Alex's work has been featured in Inside Track Magazine, TSN & NBC Sports as well as countless race programs. Alex has also worked within the junior hockey world in Canada, appearing as a desk host for the OHL's Barrie Colts. He also got the opportunity to cover the 2018 Chevy Silverado 250 which appeared as the headlining article on NASCAR.com.
@@alexgallacher95
Previous Tracking the Trucks: Zane Smith Captures Emotional 1st Career Win at Michigan
Next Austin Cindric Holds Off AJ Allmendinger; Wins Xfinity Race at Road America

For McLaren, it seems like an eternity since their glory years ended in 2014. After …