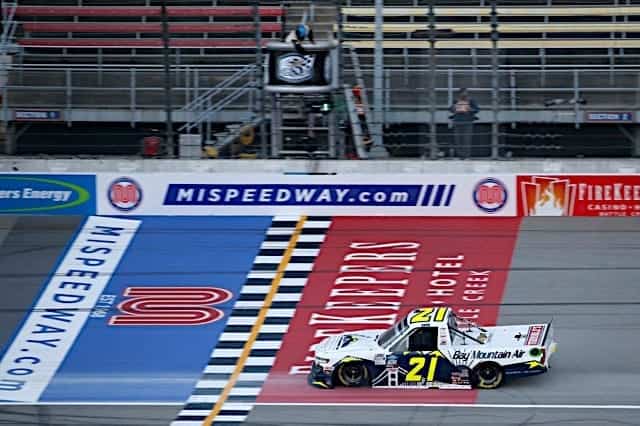 In a Nutshell: In a race filled with 11 cautions and a pair of overtime attempts, Zane Smith scored his first career Gander RV & Outdoors Truck Series victory Friday at Michigan International Speedway. Coming from seemingly out of nowhere, Smith took advantage of a spin by late-race leader Grant Enfinger and the chaos that surrounded the final restart to take the lead on the white flag lap.

Describe the final restart at @MISpeedway in one word ?. pic.twitter.com/3ntZsqRjMK

Meanwhile, stage one winner Brett Moffitt ended up seventh, followed by a pair of rookies in Raphael Lessard and Derek Kraus, who crossed the start/finish line backward. Parker Kligerman ended up ninth, following by David Gravel in his series debut.

"It's unbelievable I've made it to this point."

For the third time in four races, rookie Christian Eckes finished second and watched a different driver celebrating the victory. The driver of the No. 18 Toyota took the lead when Grant Enfinger and John Hunter Nemechek got together on the final overtime attempt, but was unable to hold off a hard-charging Zane Smith.

“Happy for Zane (Smith), but still frustrated about the outcome,” Eckes explained. “This one is definitely going to hurt the most out of the three we’ve had. Zane is a good buddy so I’m happy for him, but I’m going to have to go back and figure out why we got beat like that. Just frustrated right now so we’ll move on.”

On the surface, it’s easy to look at the runner-up finish, especially since it’s his third in four races, and see where the frustration comes from. But if you consider that Eckes spun on lap 14 to bring out the second caution and somehow managed to not get hit by the rest of the field, that rebound to second looks a bit more impressive.

“We started off okay. I got loose out of nowhere, did the same thing last year so I guess I’ll have to go back and figure out why that happened,” he said. “Kind of put us behind the rest of the day. Got a couple good restarts there at the end, but we constantly fought track position and dirty air. Our truck was just horrible in dirty air. Finally got a shot there at the end. I guess (Smith) just had a better run than I did and I went too high. He just drove around me like I was standing still. It’s three second-place finishes the last three weeks and frustrating as hell, but we’ll move onto Daytona.”

While it’s not the win he so desperately wants and that is expected of him at Kyle Busch Motorsports, the rookie is definitely impressing this season. If he can keep that frustration from getting too deep into his head that he starts making mistakes, Eckes will find victory lane before the season ends.

World of Outlaws driver David Gravel made his Truck Series debut at Michigan Friday afternoon, and despite facing a few challenges, he ended up with a 10th-place finish by the time the checkered flag flew. Originally scheduled to make his series debut at Eldora Speedway, Gravel had to adjust his schedule when the COVID-19 pandemic canceled the only dirt race for the season.

Starting 12th, Gravel dropped to the back of the top 20 by the end of stage one and was even deeper in the field at the end of stage two. Early in stage three, Stewart Friesen triggered a multi-truck crash at the midway point of the race, and Gravel was collected in the stack up behind the initial contact.

Just minor damage to the No. 24 Chevrolet allowed Gravel to continue, and the flurry of late race cautions (six in the final 40 laps), combined with a pair of overtime attempts, allowed him to climb to his top-10 result.

It shouldn’t come as a major surprise that Gravel scored a top 10 in his debut, especially considering he finished 12th in the ARCA Menards Series opener at Daytona International Speedway in February. But the fact that it was just his second race on asphalt in a completely different type of race that he’s accustomed to speaks highly of the talent he has.

Retweet to congratulate David on his outstanding run at @MISpeedway!

NASCAR announced Thursday afternoon that it would implement the choose rule, which debuted at Bristol Motor Speedway during the All-Star Race, for the remainder of the 2020 season with exceptions for superspeedways and road courses.

Would you want the preferred line or track position? @AlanCavanna rolls through the Choose Rule with some golf carts. pic.twitter.com/ltJhxOfOvh

The Truck Series got its first shot at it Friday night (Aug. 7) at Michigan, and for the most part, the drivers adapted quite well.

Much like the commitment “cone” used at the entrance of pit road, drivers are required to make their lane selection prior to an orange box painted on the racing surface, and if they ran over that box, it necessitated a penalty that would drop them to the rear of the field. And while a handful of drivers got burned by that rule in what likely amounts to the learning curve that comes with any type of competition change, the majority of the field had little issue with making that choice.

The choose rule won’t be utilized in the series’ next race at the Daytona International Speedway road course, but it will be used in 10 of the remaining 12 races on the schedule. While one race isn’t really indicative of whether the choose rule should stick around into the 2021 season, I’m already leaning toward keeping this option to give drivers the ability to choose between the preferred lane for the restart or track position.

Unfortunately i will be missing @MISpeedway, but looking forward to getting over this and back on track. Thanks to everyone who has reached out. pic.twitter.com/cSUeIgWmQT

Unfortunately, the optics in these situations point to the sanctioning body withholding the yellow for other outside circumstances. Already over its time slot with baseball waiting to come onto FOX Sports 1 and with twilight approaching, NASCAR held the yellow when in any other incident, the caution would have flown and the field would have been set up for yet another overtime attempt. I understand that there are likely multiple reasons the decision to withhold the yellow, and given that each driver was able to pull away from their incident, I don’t see an issue with the field remaining green. My issue is and will remain the inconsistency in what kind of incidents require the yellow flag to fly, and it’s something NASCAR needs to clarify and stand behind.

Frustrated. Disappointed. So many words for tonight. P2 again, lost it on the white flag. Lots of the things could have been done different, we’ll go back to work and get better for the next. @safelite @KBMteam

P7: Best result in @NASCAR_Trucks to date ?
We led several laps, had 2 flat tires in 2 different stages, tire change on the green flag, caught up with the leading pack from P39, two laps down, to P4, and finally crossed the finish line P7. Teamwork ??@SIRIUSXM @canac_ca pic.twitter.com/k9Caobt065

That’s awesome. P8 good points day I overall! Looking forward to the next one! https://t.co/Z4GXodaBi8

Finished 13th in the Irish Hills! Top 20 in the last race and a top 15 this weekend, we are headed in the right direction.

Points Update: Austin Hill holds a 42-point advantage over Zane Smith, whose victory moved him up two positions in the standings. Ben Rhodes and Christian Eckes dropped one spot apiece and sit 43 and 49 points behind the leader, respectively. Brett Moffitt rounds out the top five.

Matt Crafton is currently sixth, followed by Sheldon Creed. Grant Enfinger dropped to seventh after crashing out of the lead on the final overtime restart. Derek Kraus and Todd Gilliland round out the top 10. Tyler Ankrum in 11th is likely the only driver that will be able to point his way into the playoffs; he faces a 29-point deficit to the cut line. Tanner Gray, who is 12th is 59 points below the cutline, still ahead of veterans Johnny Sauter and Stewart Friesen after the pair continued their dismal seasons at Michigan.

Up Next: The Truck Series heads off to Daytona International Speedway to make its debut on the road course. It will be the first race in the Triple Truck Challenge that gives series regulars the shot at up to $500,000 for winning the next three events. Coverage for the race begins Sunday, Aug. 16 at 12 p.m. ET on FOX Sports 1; the race can also be heard on our local MRN affiliate or SiriusXM NASCAR Channel 90.

Zane Smith certainly has talent. Would love to hear the full story about how he got to NASCAR.