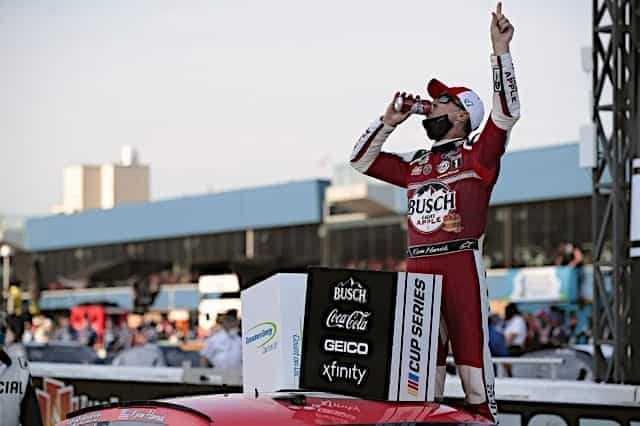 For the second time this season, NASCAR instituted a doubleheader weekend for the Cup Series, this time at Michigan International Speedway. In those four races, Kevin Harvick has been absolutely dominant, winning there and at Pocono Raceway back in June.

At 44 years old, deep into his 20th full-time season, the 2014 Cup champion is peaking. In fact, he’s tearing up the stat sheets and historical norms surrounding a driver his age.

Let’s not forget about the NASCAR Xfinity and Gander RV & Outdoors Truck series either. Their races were both debacles over the weekend, for very different reasons. But boy, do I love myself some beatin’ and bangin’ on road courses.

Let’s dive headfirst into what stood out in this week’s NASCAR Stat Sheet.

Denny Hamlin is sure giving it a hell of a shot, but good luck beating Harvick this season. The No. 4 team hasn’t ever looked this strong, although both driver and crew chief Rodney Childers say they were as good, if not better, in 2015 and 2018.

So what makes 2020 different for this year’s clear championship favorite? Well, one thing the Harvick/Childers duo couldn’t claim in any other year was a stretch of nine consecutive top-five finishes, a streak Harvick is in the middle of. It’s the first time in this future Hall of Famer’s career he’s scored such a feat, besting eight straight earned at the end of 2014 to the beginning of the 2015 season.

How much does that put Harvick ahead of the pack? Just three other drivers have at least nine top fives this season. Harvick’s done that consecutively. Talk about being effing consistent….

Harvick was dominant again this weekend, leading 182 of 317 laps (57.4%) at Michigan, a place that has become his east coast playground (yes, I remember you, Phoenix Raceway) while sweeping those two events. Scoring a pair of victories, the No. 4 team now has a league-leading six this season, one ahead of Hamlin’s No. 11 Toyota.

Through 22 races this season, Harvick has already matched his top-five total from last season (15). His career-high total of 23 is within reach while 35 playoff points have him primed for a deep postseason run.

Kyle Busch has now gone 22 races into the 2020 season without a victory. If you predicted that prior to the Daytona 500 six months ago, kudos to you. Go sign up for the lottery.

Prior to the season, Busch was most definitely a championship favorite, coming off his second triumph last season. But over the final 22 races of the 2019 season (damn, that’s a popular number this week) the No. 18 team won just once, when it all counted at Homestead-Miami Speedway.

Prior to this season, the longest Busch had gone into a season without a victory since joining Joe Gibbs Racing in 2008 was 2017. In that season, he didn’t win until the 21st race of the year at Pocono Raceway. The Cup schedule has eclipsed that mark this season but the No. 18 Toyota is still searching for the winner’s circle.

The only time he's gone longer in the season without winning is 2005 (25th race), his rookie season.

That’s not to say Busch hasn’t been close; he has. But going 22 races into a season without winning in any series is a surprise when you’re talking about KFB. Just once in Busch’s 16-year, full-time career has he gone longer without winning: his rookie season when he won 25 races in (at Auto Club Raceway in September 2005).

To me, this season has a 2011 feel. Remember that one? Tony Stewart was out to lunch all regular season, only to drop the hammer and win half the playoff races en route to his third series championship. Guess what? If Busch does the same thing, it would be his third championship, too, eh.

Through the first half of the NASCAR Truck Series season, Stewart Friesen‘s No. 52 team has to be in consideration for biggest disappointment.

Over the offseason, Friesen’s Halmar Racing Team made the switch from Chevrolet to Toyota, thinking it was the right call. After all, Kyle Busch Motorsports — the team Halmar forged an alliance with — has been the dominant organization for years, winning multiple championships.

However, that has turned out not to be the case, and on Friday (Aug. 7) at MIS, it may have hit the boiling point. Friesen went to block KBM driver Christian Eckes on a restart and didn’t clear the No. 18, triggering a six-truck pileup. The result was a 39th-place finish for the No. 52 truck, its third consecutive finish of 27th or worse. Yikes!

"Why the fuck did they go green with shit leaking all over the racetrack. This is unbelieveable, this series." – Friesen.

In 11 races this season, Friesen has an average finish of 19.2. That ranks 16th in the series among full-time drivers, behind the likes of six rookies (including Michigan winner Zane Smith). With five races remaining in the regular season, Friesen needs to start throwing some Hail Marys. This 2019 playoff driver sits 103 points below the cutline.

Not all is bad for Friesen, though. He’s still dominant in the northeast, seemingly winning big block modified races every other night, even during the reduced schedule of the COVID-19 pandemic.

Just ask Mario Andretti, and he’ll tell you Road America is one of the most challenging road courses in the world. In the world!

Surely, it looked to be that way on Saturday (Aug. 8), as the NASCAR Xfinity Series took over the 4-mile road course. It was the first of two races on the day (the first Cup race at Michigan was scheduled to start following NXS).

The race, itself, was solid. Austin Cindric scored his fourth victory of the season, beating out road course ace AJ Allmendinger. Behind them, the underdog teams came to play, as Our Motorsports earned its first career top-five result with Andy Lally. Earlier in the day you had Josh Bilicki, driving for B.J. McLeod Motorsports and Alex Labbe, for DGM Racing, swapping the lead back and forth in one of the highlights of that race.

But while there were so many incredible moments, this 45-lap race took nearly three hours to complete. Yes, a 180-mile race took two hours and 56 minutes (creating a below-the-highway speed limit average of 61.83 mph). That’s 45 minutes longer than last year and nearly an hour longer than Sunday’s Cup race.

With a 4-mile course, caution laps are terribly long, averaging roughly six minutes per lap. Those time out even longer on stage breaks. It’s so frustrating! I think Landon Cassill said it best on Twitter: there should be some way to make caution laps significantly quicker, from speeding up the pace car to shortening the course itself.

Why don’t we utilize a cut through to make caution laps at road courses significantly shorter?

And for the love of God, can we please stop having cautions for stage breaks on road courses, especially Road America! Add in the 93-minute red flag due to lightning, and this race was frustrating to cover. NXS fell so far behind that the beginning of the Cup race had to be pushed back 45 minutes.

At least the on-track product was great. But it’s a longer commitment for fans to stick around and watch it.

get rid of stage yellows flags they ruin the flow of the race, It’s called racing not stopping

Remember when stage racing was first announced? They said the commercials would show during the caution laps at the end of every stage. Guess the TV partners did not agree with that, they show as many, if not more, commercials during the green flag racing!

If you want to increase the quality of racing and still do stage racing, then make the stages into heats, with the top 20 cars duking it out in the feature (last stage), like local tracks do. Years ago, NASCAR used to give a sizeable chunk of change to the driver leading at the halfway mark of the race, but the race never stopped. Maybe do that with the stages, without a race stoppage.