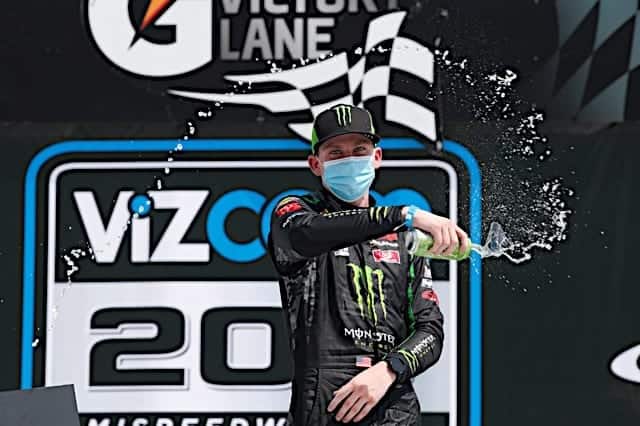 It was all about clean air on Sunday (Aug. 9) as Riley Herbst earned his first victory in the ARCA Menards Series in 1,157 days. Herbst was able to take the lead via the sidedraft on the final restart and ran away with it to earn the victory over Bret Holmes.

“Man, its definitely been a while since I have won in anything,” said Herbst. “When you don’t win it starts to sit in your head if you’ll ever do it again, no matter what series, whether it be the ARCA Menards Series, Xfinity Series, or what. Obviously it’s more prestigious as you go up but winning feels good in any vehicle. Thanks to Monster Energy, Joe Gibbs, and Toyota, we were able to pull it off here in the Irish Hills.”

“It was a late night last night coming here from Road America, but after a few Monster Energy’s on the plane and waking up early this morning and got here. Mark said ‘do you want to take a swing at it’ [during the final break] and I said ‘Sure, we’ve got nothing for them right now and I don’t want to finish second.’ We made a swing and it paid off.”

Holmes was fastest during the brief practice session Sunday morning while Herbst started on the pole by virtue of ARCA Menards Series owner points. Holmes would start the race in fourth. Holmes began the race right behind Holmes and gave him the push needed to take the lead over Ryan Repko heading into Turn 1.

It didn’t take long for Holmes himself to find the lead as he passed Herbst on the bottom of Turns 1 and 2 on Lap 4 to take the lead, Herbst remained in tow as the race reached the first break of the afternoon. On the ensuing restart, Herbst and Holmes battled it out hard for the lead with Drew Dollar in tow. Holmes ultimately took the lead and ran with it.

The first and only accident of the afternoon came when Kris Wright lost it in the entrance of Turn 1 after an apparent right rear tire failure, making hard contact with the outside wall. Wright would walk away under his own power.

Later on, Wright took MAVTV’s Dave Rieff that “…racing against other drivers was way different than it was racing his own race in practice, but he did learn some things.” Wright will make his NASCAR Gander RV & Outdoors Truck Series debut next weekend at Daytona with GMS Racing.

On Lap 59, Holmes would make a power move under Herbst on the backstretch to take the lead back and lead the field into the final break of the afternoon. The pass-by Holmes lit a fire under the No. 18 team as Mark McFarland, crew chief for the No. 18 threw and adjustment at the car as Herbst himself over the radio was confident that they would not finish second again. The evident confidence was shown on the final restart of the VizCom 200.

Herbst and Holmes would go to war one final time, this time to determine who’d be taking home the trophy. The adjustment clicked as McFarland and Herbst got themselves clean air which proved to be the winning move. Holmes didn’t go down without a fight though as he made multiple moves including a daring one almost to the infield grass on the front stretch. As the laps ticked away, Holmes began to deal with a tight race car, almost making contact with the wall per MAVTV cameramen. Herbst would ride off into the sunset and earn his first victory since Pocono 2017 while Holmes would settle for his second runner-up finish and career-high tying eighth top five finish.

“Really frustrated,” said Holmes. “I’m just really down. We didn’t come up here to finish second anymore, we come to win. It’s hard not to hang your head about being second when you lead that many laps.”

Self continues to lead the ARCA Menards Series points standings by now just six points over Holmes. The solid performance by Holmes helped him knock yet another point off the points lead as the series heads to the Daytona International Speedway road course. The last time ARCA was in Daytona, points leader Self earned his one and only victory of the year to this point. The race at the DIS Road Course is the makeup of the Mid-Ohio race that was canceled due to the COVID-19 pandemic.

MAVTV will make the call next Friday (Aug. 14) as the broadcast begins at 5 p.m. ET. The race will also be streamed live on NBC Sports Gold’s TrackPass.