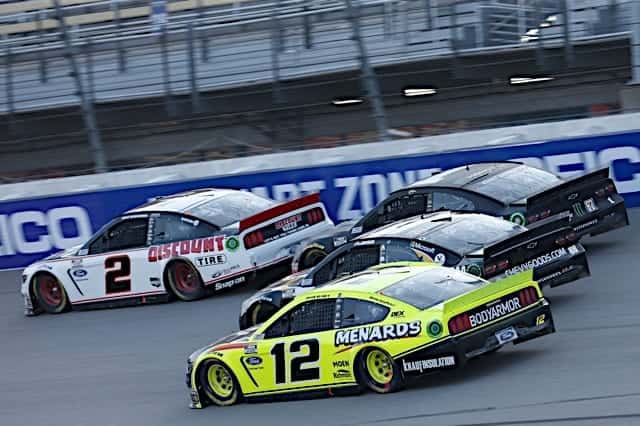 Last Sunday (Aug. 2), Brad Keselowski was in victory lane at New Hampshire Motor Speedway and was looking for two wins in two weeks. His Team Penske teammate Ryan Blaney was in contention for a victory, too, in Aug. 9’s Consumer Energy 400 at Michigan International Speedway.

Instead, both saw chances of a win wadded up. The duo wrecked out while racing for the lead, a devastating end for two-thirds of Team Penske’s trio of drivers.

Following a restart to begin the third stage, both Keselowski and Blaney were poised to unseat the dominance of Kevin Harvick. Harvick had led 44 laps to win the second stage but slipped back after pit stops as the Blaney-Keselowski duo began a fierce battle up front.

That abruptly ended on the 95th lap when Keselowski washed up the track, taking out both drivers. In a matter of seconds, Team Penske went from having two cars contending for the win to a pair of wrecked racecars.

Hard hits for Ryan @Blaney and Brad @Keselowski racing for the lead at @MISpeedway! #NASCAR pic.twitter.com/6UpVfP08FA

Keselowski immediately took responsibility for the incident upon leaving the infield care center.

“I just lost it.  It’s my fault,” Keselowski said. “I swear I went into the corner like 20 miles an hour faster than I had been all day and got past the 11 and I went to get underneath the 12 and I just slipped.”

The 2012 Cup Series champion later expanded on that in an interview with MRN Radio before tweeting an apology himself.

Brad Keselowski tells MRN of taking out Blaney: "I hate it for him. He didn't deserve that. I wish I could take it back, but I can't."

Dang.
I wanted that really bad. We were right there… I just over committed for the grip level and took out my teammate.

Feeling fine, sad for my team and teammate.

Blaney, for his part, claimed no bad blood will carry over but acknowledged the disappointment of crashing out.

“It’s just unfortunate for the whole Team Penske organization. We had two fast cars and were out there battling for the lead,” Blaney said. “He had a run and didn’t think he had as big of a run as he had and got loose. It’s just a shame for everyone at Penske…it’s unfortunate, but it’s not going to carry over. Things happen.”

One “awwww, shucks” wipes out a thousand “attaboys”….

A more accurate headline is Brad tangles with Ryan in Consumers Energy 400. A mortal sin, teammates wrecking while running 1 and 2.
What part of this race is a 400?