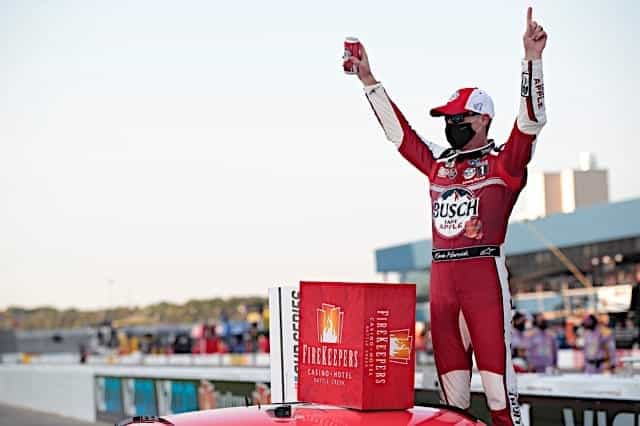 In the middle of the 1980s, drivers in NASCAR’s top division had a hard time stopping the red-colored Ford of Bill Elliott at Michigan International Speedway when he won six out of eight races.

History may as well be repeating itself these days.

Kevin Harvick won Sunday’s Consumers Energy 400 at MIS to sweep both NASCAR Cup Series races there this weekend. He has now won four of the past five Cup races at Michigan. This weekend alone, Harvick won five of six stages and led a combined 182 of 317 laps.

What were those last laps like holding off @dennyhamlin for the win?@KevinHarvick breaks it down for you. ? pic.twitter.com/v4mQdBYJJV

Denny Hamlin, who has combined with Harvick to win 11 races this season, had a shot to overtake him late, mirroring Harvick over the final laps after a restart in the late going with 15 laps to go. He stuck close to Harvick, being in a position to pass him, notably in turn 2 when both drivers got out of the gas, but Harvick made the advantage stand up to become the first driver since Richard Petty in 1971 to win races in NASCAR’s top division in consecutive days.

“It’s been a long time since I’ve raced back-to-back days, let alone in a Cup car,” Harvick said. “For us, it’s worked out pretty well, we’re hoping to do the same at Dover when we go there in a few weeks.”

"I wish I had 1 and 2 back with two to go" @dennyhamlin says following the checkered flag. #NASCAR

Hamlin wasn’t the only driver who tried to take a swing at Harvick’s dominance. After Harvick led 44 laps to win the second stage, Team Penske teammates Ryan Blaney and Brad Keselowski restarted the final stage in the lead. But Keselowski made contact with Blaney as he drifted up the track, ending hopes of a win for both.

Brad Keselowski gets loose trying to pass teammate Ryan Blaney and ends both of their days early. pic.twitter.com/AT63CYFg4c

In the aftermath of the Keselowski-Blaney crash, Clint Bowyer and Alex Bowman made contact. Bowman pitted for repairs, but Bowyer chose to stay out. Unfortunately, a massive tire rub forced him to pit under green. He lost a lap, but immediately got it back when Christopher Bell cut a tire and spun. Bowyer would eventually finish 14th after winning stage one and running in the top 10 all day.

During the yellow, there was a communication breakdown at Stewart-Haas Racing. Aric Almirola was supposed to pit with the rest of the field under yellow, but there was a issue with the radio coding.  As a result, Almirola stayed out and took the lead.

Once the race restarted, Almirola was able to hold Harvick off for the first few laps before he made what turned out to be the pass for the win on Lap 116.  Not pitting meant that Almirola desperately needed a caution so that he could make his final stop without losing a lap.

That final yellow flew on Lap 138 when Bowman cut his right rear tire and left his tire casing in the middle of the track exiting Turn 4. Almirola pitted here and dropped back into the 20s.

On the final restart, Harvick was able to jump out to a lead of nearly a full second over the rest of the field before Hamlin slowly ran him down. Despite that charge, Harvick could not be preventing from his weekend sweep.

Harvick’s weekend sweep, combined with Keselowski’s crash and 39th-place finish, means that Harvick now has a 137-point lead over Keselowski.  Hamlin is third, followed by Blaney and Elliott.

Next up for the NASCAR Cup Series is the inaugural Go Bowling 235 at the Daytona International Speedway road course configuration that has never been raced on before. Coverage will begin at 3 p.m. Sunday on NBC.