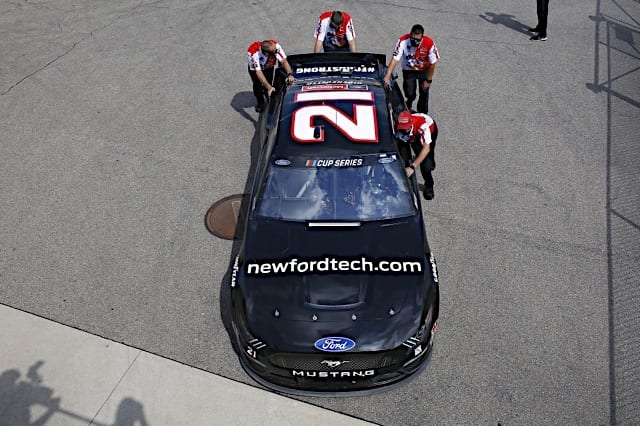 Kevin Harvick entered the weekend tied with three other drivers for wins among active competitors.  He leaves with two more victories and tied with Hall of Famer Rusty Wallace for 10th all-time. That’s a statement weekend for Harvick in a year where he’s already made plenty of them.

Harvick didn’t cruise to his win on Sunday (Aug. 9) at Michigan International Speedway.  He had Denny Hamlin in second and closing. Hamlin almost got close enough to make a run a few times, but Harvick was able to take away the top groove where Hamlin was faster without hurting his own speed. That’s despite preferring a bottom groove where Harvick excelled and most other drivers faltered. Is this finish the kind we might see at Phoenix Raceway in a few months?

Many times, toiling in underfunded equipment doesn’t get a driver noticed; it gets him marked as damaged goods. Even with some impressive runs, he’s never given an opportunity with a better team. That makes Matt DiBenedetto’s 2020 to date doubly impressive. He’s climbed the ladder from the lower-level group, and now, he’s in solid playoff contention with the Wood Brothers operation.

DiBenedetto’s on a one-year deal, but he’s certainly making a case for a longer contract. He finished seventh Sunday, scored stage points, and has a better average finish this season than the two drivers ahead of him in points.  If this year was supposed to be a learning curve, then next year, Matty D should be even better.

What… other big numbers changed hands at MIS?

None… yet. After leading 92 laps Sunday, Harvick is just one lap shy of Jimmie Johnson’s 700 laps led at MIS, currently the best among active drivers. But if Johnson doesn’t race at all in the Cup Series next year, Harvick will hold the top spot without turning a lap, let alone leading one. If Johnson does (and that is likely), Harvick will have to lead just two circuits to take the record away. Given his recent prowess at MIS, that’s probably a safe bet.

Pole-sitter Clint Bowyer was the poster boy for track position and clean air. After inheriting the pole when Chris Buescher had to drop to the rear for the start, Bowyer led every lap run in the first stage. He finished fifth in stage two, remaining in contention until an unscheduled pit stop in the final stage knocked him down in the running order to 14th.

Most Popular Driver Chase Elliott boasts the top average finish (7.7) among drivers at Michigan for a reason. He scored his second top 10 of the weekend Sunday, finishing ninth.

Last week’s winner Brad Keselowski got the victory lobster at New Hampshire. But while he carried the momentum to a second-place run on Saturday, his luck ran out on Sunday. After getting loose racing for the lead just 95 laps in, Keselowski collected teammate and race leader Ryan Blaney in an incident that ended both their days. He took the blame and apologized to Blaney, but the damage was done.

Harvick and Hamlin’s duel at the finish encapsulates the 2020 season perfectly. Through 22 races, the pair own half of the trophies, with Harvick banking six wins to Hamlin’s five.

And it’s an interesting argument both for and against the playoffs.

Right now, Hamlin sits third in driver points despite his five wins; Harvick has the lead, and Keselowski sits second. Harvick’s gap over Hamlin is 127 points. That’s not insurmountable in 14 races, but it’s close. The playoff resets should, barring disaster, put the pair, along with Keselowski, on a level playing field. These are the drivers who deserve to race for a title.

But even if Harvick and Hamlin cruise through the playoffs, will there be a payoff? Keselowski most likely will be right there with them at Phoenix as the three have a pile of playoff points to work with. Beyond that, there’s really no driver who has shown they deserve to be champion this year. Yet someone will be on equal footing entering Phoenix in November. As much as it should come down to Harvick and Hamlin, with Keselowski giving them heck all the way, it could just as easily come down to someone else having one good race. As of now, it would be hard to say that title would be truly deserved.

Simple: next week, we head to a track none of NASCAR’s national series has ever raced on. And there’s no practice this year, so things could get interesting as Daytona’s infield road course replaces Watkins Glen International’s permanent one on the schedule due to COVID-19 concerns in New York state.

A handful of NASCAR drivers have run the road configuration in the Rolex 24 or the Roar Before the 24 in sports cars. However, whether they actually have an advantage from that is anyone’s guess.

In the Cup Series, just four drivers have experience on the course. Kyle Busch is the most recent, having run Rolex this January, and Johnson is the most successful. He’s earned an overall runner-up finish twice, back in 2005 and 2008. Kurt Busch has raced to a third overall while Cole Custer participated in the Roar in 2018.

Of the likely NASCAR Xfinity Series entries, AJ Allmendinger has by far the most experience, with 14 Rolex starts and an overall win (2012). Austin Cindric has run the Rolex twice while Chase Briscoe has competed in the Roar Before the 24.

How… is that playoff picture looking with four races to go?

It’s either about carved in stone (the 10 winners and probably anyone in the top 10 in points without a win) or getting fuzzier by the minute.

Both Austin Dillon and Cole Custer have wins but are outside the top 16, which sticks Erik Jones and Tyler Reddick outside the cutoff, along with Johnson. William Byron is currently 14th yet has only a slim gap over Jones, who now has something to prove after losing his ride for 2021, along with Johnson, the seven-time champ. The margin over both of them sits at 26 with four races left in the regular season.

But as hard as it is to call Byron safe, it’s also hard to call Bowyer or DiBenedetto safe because two of the final four regular season races are pretty much wild cards. No one has raced the Daytona infield course in a Cup car and the Daytona oval cutoff could be won by just about anyone. Even if Dover International Speedway’s doubleheader races go to someone predictable, you know who’s predictable at Dover?  Johnson, who needs a win and does not want to go out without one. If three of the last four races go to drivers currently not inside the top 14, the playoffs will be even more nuts than usual.

The playoffs concept has been and still is the most ridiculous one in racing. Although it rewards drivers for winning, especially after the playoff part of the schedule starts, it shuts the door on teams with consistency. Take the 1998 season and the battle between Jeff Gordon and Mark Martin. Neither started the season very well, but put together 20 wins between them the second half of the season, Gordon 13, Martin 7. The big difference near the end was consistency; Gordon finished in the Top 10 more than Martin, and Martin had a few bad finishes outside the Top 20. Now, couple that with the fact that a driver like Cole Custer or Austin Dillon could get lucky in the final few races and win the whole thing, and you’ve got a Kurt Busch scenario all over, again.