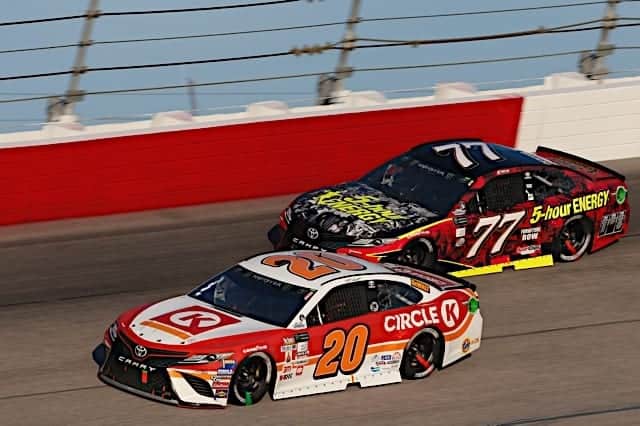 Up to Speed: Matt Kenseth, Erik Jones & the Cost of Driver Development

Back in the summer of 2017, change was afoot at Joe Gibbs Racing.  During Kentucky Speedway’s race weekend, Matt Kenseth publicly announced that he would not be returning to the No. 20 Toyota in 2018.  Several days later, JGR confirmed that Erik Jones would move over from Furniture Row Racing to replace him.

The impending driver switch generated a lot of strong opinions among fans.  Many insisted that Joe Gibbs and his team were making a huge mistake in not offering Kenseth a new contract.  Alternatively, others insisted that JGR had to get Jones on its main team, no matter the cost.  Jones was a rookie in the NASCAR Cup Series at the time and had a legitimate claim to being one of the hottest prospects in the sport.  His resume included a Gander RV & Outdoors Truck Series championship along with eight Xfinity Series wins at only 21 years old.  Supporters of his move to JGR simply argued that Jones was the future of the organization.  If Gibbs didn’t take him now, he would surely get picked up by another team, and JGR would always regret that they let the next great NASCAR talent slip away.

For Jones, the shoe is now on the other foot.  On Thursday, Aug. 6, word leaked out that Jones and JGR would part ways at the end of the 2020 season.  Both the driver and team subsequently confirmed that the reports were true.  Jones’ replacement has not been officially named, but it is highly likely that Christopher Bell, a current Cup Series rookie and highly touted Toyota prospect, will be the next driver of the No. 20.  Just as Gibbs and Toyota did in 2017, they are betting on a brighter future with a prospect than with their current driver.

Of course, betting on the prospect did not work out the last time.  Since joining JGR, Jones has had moments of brilliance but has not delivered on the lofty expectations set up by his team.  Despite the success that the Gibbs organization has enjoyed as a whole, Jones has only won two points-paying races and has never advanced beyond the first round of the playoffs.  Perhaps more telling, he and the No. 20 team have not taken a definitive step forward in terms of becoming weekly contenders for wins.

Jones may still have a bright future ahead of him, and the struggles of the No. 20 team are not all his fault.  But it is clear now that he is not the perfect fit for JGR that Gibbs and Toyota thought he was.

JGR would have been better off by keeping Kenseth all along.  Instead of Kenseth bouncing around to different teams on a part-time basis, he could have easily stayed in the No. 20 for another two or three years and likely retired on his own terms once Bell was ready to take over.  It’s true that Kenseth’s results with Chip Ganassi Racing this year have not been good.  But if he was still with a familiar team and did not spend all of 2019 on the sidelines, he would certainly be performing at a high level.  Casting Kenseth aside at the end of 2017 wasted all of the potential that the No. 20 team had to succeed.  Doing the same to Jones now only compounds the original mistake of letting Kenseth go too soon.

Given the history of JGR, it is important to understand exactly why Kenseth was so valuable to the organization.  In the early 2010s, Gibbs’ team looked like a rudderless ship.  The departure of Tony Stewart left them without any veteran leadership, a hole that was reflected in the drivers’ performance.  Kyle Busch and Denny Hamlin had big-win seasons from time to time, only to follow them up with long stretches of races where they struggled.  Even worse was that Busch and Hamlin were often temperamental in their early years and got flustered by setbacks on the track.  Whenever it seemed like either of them were on the verge of stepping up and providing a real challenge to Jimmie Johnson and Hendrick Motorsports, Busch and Hamlin would self-destruct.

If JGR was going to win another championship, it needed a driver who was not only excellent behind the wheel but one who could be a stabilizing force for everyone else.  Kenseth is just such a driver, and Gibbs knew that he would be the best person for the job.  That’s why Kenseth’s move to the Gibbs team in 2013 was such a big deal.  It wasn’t just a case of JGR getting a sought-after driver, it was a case of getting the right driver at the right time for a specific purpose.

Over five years, Kenseth fulfilled that purpose.  He may not have won the championship in 2013, but his seven wins were the most ever by a driver of JGR’s No. 20 in a single season.  Kenseth is still the only driver of that car to win multiple races in one season since Stewart last did it in 2007.  And several of Kenseth’s victories came at tracks like New Hampshire Motor Speedway, Richmond Raceway and Pocono Raceway, places where he’d struggled with Roush Fenway Racing.  Right up until his last win in the penultimate race of 2017, Kenseth did great work for JGR.

Meanwhile, Gibbs’ organization really did improve as a whole.  Busch fought back from a nasty injury to win his first championship in 2015, showing a level of resilience he probably would not have had a few years earlier.  Hamlin had his ups and downs but became more consistent over time and has looked like a whole new driver over the last year and a half.  Even Joey Logano, who Kenseth displaced at JGR, went to Team Penske and elevated his game to a higher level, winning a title of his own in 2018.  Busch may have the trophies and Hamlin has the recent momentum, but JGR’s success in the 2010s hinged on the acquisition of Kenseth’s experience and abilities.

Unfortunately, Gibbs underestimated how difficult it would be to replace Kenseth.  No doubt he and Toyota assumed that they could just plug Jones into the No. 20 car and get the same results.  But as a young driver with little experience, Jones never stood a chance at filling Kenseth’s role on the team.  Expecting him to do so just because he appeared to be the next big thing was ridiculous.  Unlike with Kenseth, JGR’s only discernible strategy for bringing Jones on was hope, not stats that showed he might be able to live up to lofty expectations.  Regrettably, those same expectations wound up crushing Jones.

Further complicating matters is that JGR still does not have much of a plan for the No. 20 car.  If Jones really is a future superstar, then JGR looks foolish for cutting him.  If Jones is not a superstar or needed more time to adjust the demands of professional stock car racing, he should not have replaced a driver of Kenseth’s caliber.  Once again, it comes down to what the next prospect can do.  Bell, like Jones, has a Truck Series championship and a decorated Xfinity career, but there is no guarantee that he will be better than Jones.  And if Bell doesn’t adjust right away, does that mean that Gibbs and Toyota will toss him aside for someone like Harrison Burton in a few years?

For as much success as JGR has enjoyed recently, the No. 20 team remains a problem.  While Jones will likely land on his feet with another good team, his departure means that Gibbs will have to start all over with getting the new driver up to speed.  Meanwhile, the one-time, can’t-miss prospect will move on, just as Gibbs and Toyota feared might happen if they did not sacrifice their veteran leader on the altar of driver development.

Bryan began writing for Frontstretch in 2016. He has penned Up to Speed for the past three years. A lifelong fan of racing, Bryan is a published author and aspiring motorsports historian. He is a native of Columbus, Ohio and currently resides in Southwest Florida.
Previous NASCAR Stat Sheet: Six-Minute Caution Laps On Road Courses The Wrong Type Of Record
Next The Big 6: Questions Answered After the 2020 Consumers Energy 400