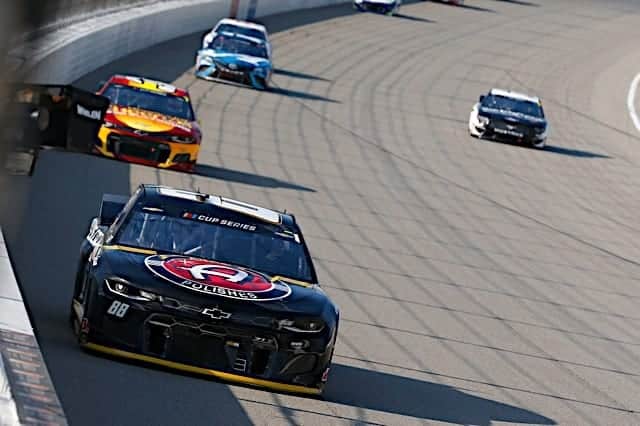 Way back when, in an era when the Earth was still cooling and the war in Vietnam was still heating up, there was a less than charming saying that went, “Life is like a crap sandwich. The more bread you have, the less crap you have to eat.” Of course, the word “crap” was typically replaced with another of George Carlin’s “Seven Words You Can’t Say On TV” also meaning excrement, but as an old guy I still try not go beyond PG-13 in these columns even while profanity becomes more and more common in social and even mainstream media. Call it the South Park Commonality. Anyway, back then, “bread” was a euphemism for money. And the saying indicated that as you acquired more material wealth, you had to accept less and less hardships in life.

By now, you’re doubtlessly wondering how in Hell I’m going to redirect this column toward NASCAR racing. (And thinking you’d like to have me do it as soon as possible.) Easy there, Cowgirl, this ain’t my first rodeo. I can spin a column faster than Burt Reynolds could turn around a black ’77 Trans Am or Junior Johnson could pull a bootlegger’s turn in the hills of Caroline.

So yeah, I’ve come to think that NASCAR Cup races are beginning to be much like crap sandwiches. The bread at the top and the bottom of the sandwich is baked a delightfully fluffy and warm brown. It’s what’s in the middle of those races that has become less and less appetizing.

We’ll consider the opening portions of the race as the top of the bun. In this era of no practice or qualifying, the only practice or testing most weekends is the portion of the race between when the field takes the green and what NASCAR insists on calling the “Competition Caution.” Those competition cautions tend to occur quite early in the race. Even a driver who finds his car came off the trailer handling very badly knows unless his car is completely out to lunch, he likely won’t go a lap down in the first 25-30 laps before he gets a pre-scheduled pit stop to make improvements. (Unless like last week, the reigning Cup champion puts himself hard into the wall on lap 15. Nope, hard to get happy about that.) The competition caution disrupts the flow of and the strategies inherent in races left to play out naturally. Originally, it was stated the competition caution was a safety measure. It would give the teams a chance to inspect their tires to see if any unusual wear patterns were developing, but the teams aren’t required to replace or even take a glance at their tires. So the competition caution has basically become a pre-scheduled commercial break for the presenting network. And they like their commercial breaks. Even if a big name driver crashes out of the race (as seen on the side-by-side coverage box) they won’t cut back to the action. They are so convinced that you want to see commercials telling you when and where next week’s race will be broadcast you don’t give a crap about that day’s event apparently.

On the other side of the sandwich, you have the other half of the bun, the finish of the race. Admittedly, there have been some highly competitive, exciting and unexpected finishes this season. I mean if you put a grand down on Cole Custer to win the Cup race at Kentucky, you’re probably sitting back at the helm of your new 100-foot yacht sipping on a boat drink while visiting private islands that are for sale. Bet on Austin Dillon to win in Texas (or anywhere else for that matter)? I hope the Aston Martin you bought with your winnings is living up to your expectations. Or maybe we’re grading the finishes of races on a curve since we’re back to real live racing at all. It’s disheartening to recall it was only a couple months ago race fans were reduced to watching what amounted to a glorified video game on Sunday afternoons. The less said about that the better. And there’s still that lingering unease that if the wrong person sneezes in the wrong area of a newly reopened grandstands at a NASCAR race and touches off a super-spreader outbreak, the whole circus might have to be shut down again. Not for months. For years.

Whether the finishes are actually excellent or they’re just compelling compared to a video game is open to debate. The real question is if it’s worth it for a fan to invest over three hours of their time watching an event (most likely at home possibly wearing a mask) for five minutes of excitement at the end. I tend to think not. But then again, it’s not like we have a whole of entertainment options open to us depending on what state we live in and how under control the virus is in the area. What were you going to do instead? Go to the theater to catch one of this summer’s blockbuster hits? Good luck with that.

Which leaves us with the crap in the middle of the sandwich and the entire middle portions of the race. Oh, see Denny run! Run Kevin, run. Oh, see Kevin run! Hmm. How long to the next stage break? You think NBC can fit in another 15 minutes of commercials before then? Gosh, I hope so. If not, there’s always the GEICO’s Five Laps Until the Stage Ends Moment.

When it comes to stage racing, I am hopeful that NASCAR has a Road to Damascus moment and realizes the great harm it is doing to the sport. Pre-scheduled cautions destroy the purity of a race. Whereas from the early days of the sport, crew chiefs, with input from their drivers, had to gamble on pit strategy. The drivers had to guess when those cautions might occur to know how long and hard they could run a fresh set of tires, knowing if abused, later in a run those tires started losing their grip. A fine balance had to be struck between blistering initial speed and long-run lap times, particularly at a track like Darlington.

Starting at Michigan, NASCAR made another major change to race day procedures, the so-called Choose Cone. The jury is still out on this one, but on first blush it seems NASCAR officials once again hung out in their secret underground lair to come up with yet another answer to a question no one was asking. Up front, I’ll make three predictions about the new procedure:

One partial solution to the crap crises would be to shorten the lengths of some races. Again, if you accept the premise that a lot of NASCAR races today are crap sandwiches, then lessening the amount of crap between the buns is a viable solution. There are only three races annually that I feel have need to have race lengths exceeding 400 miles: the Daytona 500, the World 600, and the Southern-By-Gawd 500. All other races are in play, with an eventual goal of having the average race complete with adequate post-race coverage over in around three hours. Happily enough, 500 kilometers is roughly 310 miles, so if tracks still want to call their races the “Something Or Another 500 Presented by Some Other Firm,” they can feel free to do so.

I did note in the comments section below some of yesterday’s Frontstrech articles that some fans weren’t happy with the fact Sunday’s Cup race at Michigan lasted only two hours and 10 minutes. Nor did they care for the racing itself. Reminds me of that old joke about two cranky older women at a restaurant. One snaps, “the food here is terrible.” The other replies, “and the portions are so small.”

In an attempt to make up some of the race dates lost to the quarantine, NASCAR ran a doubleheader Cup weekend at Pocono. They ran another one this weekend at Michigan. (Let’s call it the “Michigan and This Again?” weekend.) Another doubleheader weekend is up at Dover on Aug. 22 and 23. Sorry, but having a two-for-one special on crap sandwiches isn’t going to have me pulling up to the drive-thru window.

Matt joined Frontstretch in 2007 after a decade of race-writing, paired with the first generation of racing internet sites like RaceComm and Racing One. Now semi-retired, he submits occasional special features while his retrospectives on drivers like Alan Kulwicki, Davey Allison, and other fallen NASCAR legends pop up every summer on Frontstretch. A motorcycle nut, look for the closest open road near you and you can catch him on the Harley during those bright, summer days in his beloved Pennsylvania.
Previous Danny Bohn Returns to On Point Motorsports for Remainder of 2020 Season
Next 5 Points to Ponder: NASCAR’s Early Stages Turning Into Snoozers, Plus… Christopher Bell