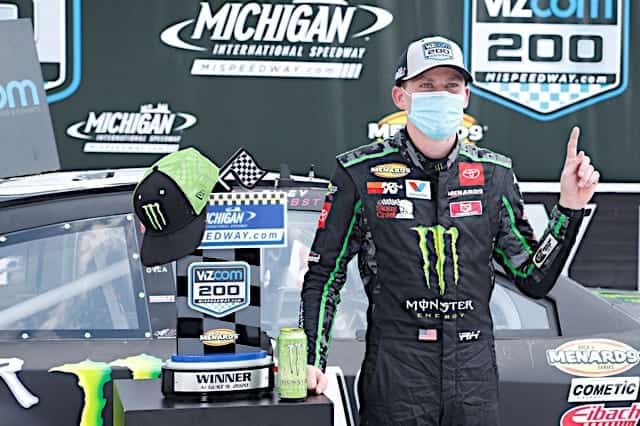 Riley Herbst‘s ARCA victory at Michigan Sunday came at an interesting time for Toyota Racing Development. The victory comes just a few days removed from the announcement that Erik Jones would not return to Joe Gibbs Racing in 2021. Herbst is one of Toyota’s long-term “experiments” that earned his first victory in over 1,000 days. Many have opined that Herbst did not deserve the Xfinity Series ride he’s currently in, and dating back to last season, he’s 0-28 in 28 starts. Herbst has shared the No. 18 Toyota Camry with Joe Gibbs’s grandson, Ty Gibbs, over the last two seasons. Gibbs has to be in discussions to move up to the next level, the only issue is where that next level may be.

When you look at the NASCAR Gander RV & Outdoors Truck Series, there are only five full-time organizations that run Toyotas: Kyle Busch Motorsports, McAnally-Hilgemann Racing, Hattori Racing Enterprises, Halmar Friesen Racing and On Point Motorsports. The majority of these teams have longtime drivers, meaning that Gibbs will either stick in the ARCA Menards Series in 2021 or will run part-time with KBM.

Gibbs isn’t the only driver currently in the system with Toyota. Michael Self, Drew Dollar, Ryan Repko and Chandler Smith are also waiting for an opportunity to move up, and the issue is that remaining with Toyota may result in that time being far off. Though Self isn’t technically in the system as a development driver, he’s been in the lower ranks since 2014 and has yet to make a start with a top-tier Toyota team in NASCAR’s top three divisions.

With the sale of Leavine Family Racing, there is now one less Toyota organization at the top level. TRD isn’t short of developmental drivers, but is falling short of rides for those drivers. Herbst’s victory on Sunday proved that every driver that is currently a part of the system deserves to be there, but it also reveals it’s only time before these drivers moves somewhere else. There will never be a shortage of drivers, but the concern right now is the shortage of rides.

Will these rides come from current Toyota drivers like Kyle Busch and Denny Hamlin? That very well could be one way to not only bring in new teams, but also give homes to potentially homeless TRD drivers. KBM attempted the jump to the Xfinity Series and fell short of funding, shutting down at the conclusion of the 2013 season. Martin Truex Jr. owned an ARCA Menards Series team in 2009 that had Jesus Hernandez behind the wheel, but Hernandez failed to start his team’s single attempted race at Kentucky. With the assistance and push from Toyota, this very well could be an answer to Toyota’s problem, but as many know, funding has always been key.

Every weekend, at least 39 cars enter the NASCAR Cup Series. Seven of those teams are not on par and are struggling with funding. Richard Petty Motorsports is one that comes to mind in this situation. Could Toyota find a currently struggling team and make them championship caliber with a combination of their powerplants, drivers and other resources? Furniture Row Racing had two career victories with the Chevrolet “bowtie” on the hood, but once Toyota showed up, the victories did too, earning a total of 16 victories and a Cup Series championship before shutting its doors at the conclusion of the 2018 season. There are multiple teams in the NASCAR Cup Series that could only dream of earning one victory in the series. With support from Toyota, that very well could happen.

The NASCAR Xfinity Series and Gander RV & Outdoors Truck Series all have teams that very well could move up with the help and support. Kaulig Racing is one that comes to mind, as it already has a strong lineup of drivers. AJ Allmendinger used to be a Toyota Racing driver back when JTG Daugherty Racing was a Toyota team. Ross Chastain has been forever touted as the “next big thing” in NASCAR, and Justin Haley has popped out of the blue to be a success story. Currently with Chevrolet, Kaulig could really use TRD support to move to the next level. The Truck Series has three teams that could very well become something bigger later on. HRE currently shares a ride at MBM Motorsports, and with help from Toyota, could make that a bigger thing that opens a door for someone currently in ARCA to move into the Truck Series.

Toyota supports the ARCA Menards Series (East & West) in a huge form; without them, the series would struggle to be anything. Venturini Motorsports has one of the biggest impacts in the series, fielding entries in the ARCA Menards Series and ARCA Menards Series East. The days of having a large list of different drivers in cars have changed to having three drivers run full-time for championships in effort to gain sponsorships for their stair-step to the top. Sponsors and manufacturer support are the most important things to the sport right now.

As Brock Beard with LASTCAR.info denoted in one of his last videos about the “Beginning of the End for Ginn Racing,” these sponsorships could step up in massive ways by combining with current teams to make one major team. True, the Ginn Racing deal was a failure, but in today’s time, it might have worked with NASCAR’s new entitlement sponsor layout. Monster Energy is highly behind the Gibbs camp right now, sponsoring Ty in the ARCA Menards Series and as part of a longtime partnership with Herbst. If Monster’s higher-ups teamed with leaders from other organizations to form a single race team, the voids that currently exist could also be filled.

It’s not a sinking ship. After all, Toyota has earned a total of 27 victories across the six NASCAR series thus far in 2020. But the lifeboats are filling fast.

Jones isn’t the first driver to lose his ride due to lack of room; ironically, Matt Kenseth lost his after the 2017 season to make room for Jones. Toyota isn’t in trouble yet, but it’ll only be time before drivers begin moving elsewhere. The loser there will be Toyota, though the winners may well be the fans, as the Cup Series will benefit from the talent pool dispersing. Though not a new problem, Herbst’s victory Sunday just highlighted how acute this situation could become — and how soon.

Where are these excess Toyota drivers going to go? Ford has no room at the inn and Chevrolet is impotent at this time and don’t seem to be interested in providing their teams with the kind of support that Ford and Toyota give to their teams. Unfortunately if they want to move up they will have to be back markers for the under funded teams in the cup series or continue to race successfully in the minor leagues.