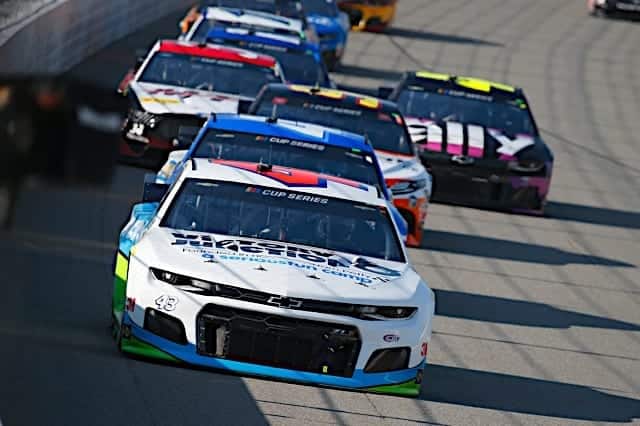 A doubleheader last weekend at Michigan International Speedway meant twice the opportunity for the underdog class to snag a solid finish. On Saturday, Bubba Wallace did that and then some, ending up with a ninth-place result.

Running as high as third in the closing laps, Wallace briefly had visions of his first career win. However, a late-race restart didn’t go very well, and he lost several positions. Still, it was Wallace’s fourth top-10 finish of 2020, leaving him 20th in the overall standings. By comparison, he was 28th in points at this time last year and had just a single top 10 all year long. After the race, Wallace recognized the improvement the team has made and lamented not being able to spend more time at the facility.

“A solid day for us and our Victory Junction Chevrolet. I appreciate everybody back at the shop. I know this whole COVID-19 deal has been tough. I haven’t been able to go to the shop and show my appreciation and how much they really work and make our cars better week in, and week out. So, it’s been fun. We’re in the middle of ‘Silly Season’ right now, so my mind is there, it’s here. So to come out with a solid top-10 finish is positive.”

Wallace had a decent showing on Sunday, but it was Ty Dillon who took top honors with his 18th-place finish. Dillon doesn’t have multiple top-10 runs like Wallace, but his consistency has been improving as of late. Crash damage sidelined him at Texas, but the rest of his last eight starts garnered a 23rd or better.

“My GEICO-Germain Racing guys did a good job this weekend.” Dillon said after the race. “We made adjustments from yesterday to today and it definitely improved the handling. At the end there, it took our Camaro ZL1 1LE about three laps to come in, and then it started rolling. We ran our fastest lap of the race in the final 10 laps, so I think if we had a few more, we would have finished even better. I’m happy to leave with a top-20 finish though. I’m looking forward to the Daytona Road Course next week.”

While the top 20 was notably void of additional underdog teams, Corey Lajoie deserves a mention for his team’s performance at Michigan. Lajoie finished 22nd in both races last weekend, which also marked the first time the No. 32 has finished on the lead lap in back-to-back events since the first two races of the season at Daytona and Las Vegas.

The Xfinity Series ventured off on its own this week to Road America. Like superspeedway races, road courses have become a great equalizer between the haves and have-nots. Saturday’s race was no exception, as veteran road racer Andy Lally brought his Our Motorsports No. 02 home in the fifth spot. The finish marked the second top five for the team after just 18 starts in existence.

Preston Pardus led the charge for Mario Gosselin-owned cars to claim three of the top-15 positions at the end. Pardus finished eighth while teammates Josh Williams and Alex Labbe were 13th and 15th, respectively. Ryan Sieg came home ninth and Brandon Brown also rebounded from a disastrous start to finish 12th. Josh Bilicki may have only been 17th at the end, but he did raise several eyebrows by leading four laps around the Elkhart Lake course.

The Gander Outdoors Truck Series also hit the track in Michigan, with Derek Kraus once again showing the way in eighth. Parker Kligerman traded in his microphone for a firesuit this week, earning a ninth-place finish, Tate Fogleman wound up 13th and Dawson Cram was 14th at the end.

All three national touring series take on a whole new challenge this week. The infield road course at the Daytona International Speedway will host the triple debut in a most unique way. The first time any of the drivers will take a lap in their cars will be when the green flag waves. Talk about a great equalizer. Not only do I anticipate the underdog class running well, but one of them could pull off a victory with a little luck. Look for drivers who have run the infield road course in other types of cars to do well, especially early on. For the Cup cars, things could go well for Michael McDowell. In Xfinity, Lally could have another big day. And as for trucks, experience will be a big advantage for drivers like Kligerman and Brennan Poole.

Like a good fight, these are never actually fun, they are THRILLING, and that’s why we do this. The fun is in the reflection of a job well done. These cars are so awesome to battle with. Thank you to @OurMotorsports for an amazing opportunity. pic.twitter.com/corTU6pkhC

Brought home 3 top 15s from the twists and turns at Road America! We had multiple cars lead laps, raced in the sun and rain, fought our way back to front, and at one point all three cars were running top 10!#smallteammakingbigstrides @AlexLabbe36 @Josh6williams @PrestonPardus pic.twitter.com/1bKtGdq4H0

A clean day for our #7 @TBR_Racing team. Our @wilightinglab Camaro was solid all day, but unfortunately we lost a lap when we ran out of fuel mid race. Our pit crew did a great job making sure we didn’t lose more than one lap when it happened and we finished the race strong! pic.twitter.com/njcC1FKpAZ