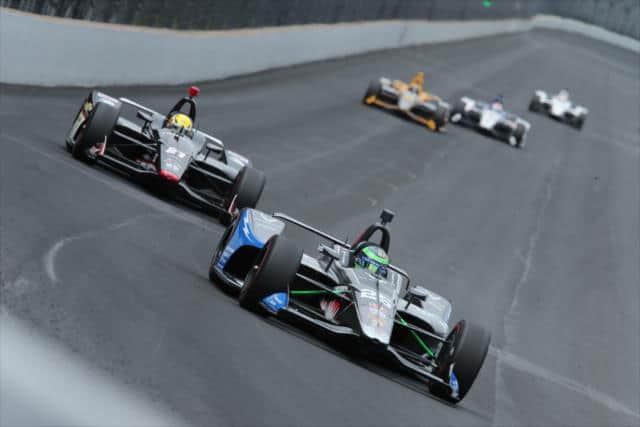 When the 2020 Indy 500 takes place on August 23, it’s going to happen with a complete field of 33 entries. That’s what fans were hoping for in a turbulent 2020 season—but why is having a full group so important, particularly this year? And how did IndyCar get to the field of 33, anyway?

Back in 1911, the race’s American Automobile Association sanctioning body developed a formula designed to limit the cars on track. It determined that 400 feet between cars lined up single-file would be a safe, reasonable way to fill up the track. Using that math, 33 cars could safely fit on the 2.5-mile track, and the Indy 500’s magic number was born.

But 33 entries haven’t always started the race. Track President Carl Fisher thought that 33 cars was too many, so he dropped it down to 30 until 1915. During the Great Depression, 40 cars were allowed to enter. It’s only since 1934 that 33 drivers have always taken part in all but the most extreme circumstances.

One could classify 2020, in which teams are dealing with the COVID-19 pandemic and a smaller Indy 500 purse as a result, as extreme circumstances—and that’s why it means something for the 500 to have a full field this year.

This is the official entry list for the 104th Running of the #Indy500 presented by @GainbridgeLife. https://t.co/4mKAQ7AHOL

The Indy 500’s draw is larger in scope than just the 2020 IndyCar season. It’s been a big deal for over a century, and anyone is allowed to enter so long as their car meets that year’s regulations. Bonus points and big purses encourage teams to field as many cars as possible, and one-off hopefuls can come test their skills in the big leagues.

A full field is also a good indicator of the health and competitiveness of the NTT IndyCar Series.

Since the early 2000s, interest in American open-wheel racing has waned. Smaller entry lists for the biggest racing event in the world meant that very few drivers—if any—would be “bumped,” which means that a driver failed to set a time fast enough to qualify in the field of 33. For a few years, a last-minute entry from Buddy Lazier was the only reason the field was filled.

When Bump Day returned in 2018, fans heralded it as a good sign. High-profile drivers like Fernando Alonso had recently competed, and figures from other series or who’d moved on to other series like Danica Patrick were using it as a last hurrah before retirement. More interest was piqued. Both drivers and fans were invested in the Indy 500 in ways they hadn’t been just a few years prior.

That investment is key for the 2020 Indy 500. There was a legitimate fear that the economic impact of the COVID-19 shutdown would see teams hesitant to compete—especially now that the prize money has been halved. Teams are still interested in contesting the race and have put their faith in both IMS and IndyCar. It’s a damn nice thing to see.

There won’t be any bumping this year. Some of the smaller teams that intended to compete, like Top Gun Racing, didn’t make Monday’s entry list. But with a packed starting grid, there’s still hope that the 2020 Indy 500 can be a success despite the pandemic and help carry IndyCar forward into a still unpredictable future.