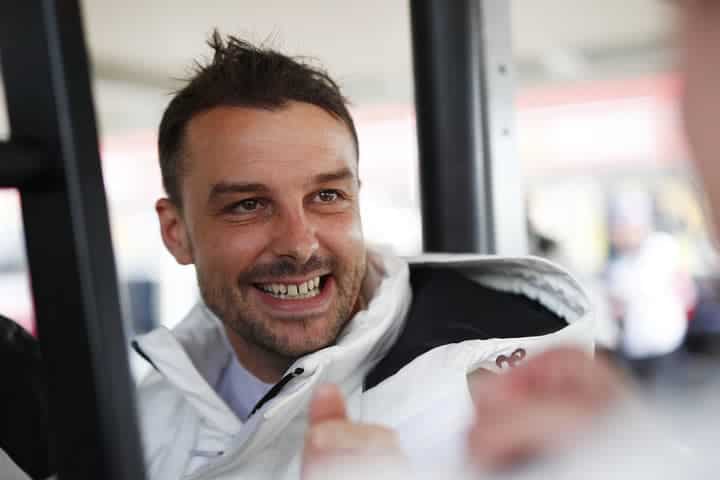 There are many unknowns heading into this weekend’s races at the Daytona International Speedway road course, but one thing is for certain, Earl Bamber will make his NASCAR debut in the Xfinity Series for Richard Childress Racing.

Bamber is an accomplished road racer, currently running for Porsche in the Weathertech SportsCar Championship Series. Competing in the GTLM (GT Le Mans) class, the native New Zealander has three podium finishes this season, earning top-five finishes in all four starts. In addition, he’s coming off a championship season in 2019, and he won the 24 Hours of Le Mans in 2015 and 2017.

Prior to hopping into an Xfinity car for the first time at Daytona, Bamber spoke to Frontstretch to discuss how the opportunity with RCR came about, living out his dream of competing in a NASCAR race and his goals for the weekend, given he’s ran in seven races at the Daytona road course.

This interview has been edited and condensed for clarity.

Dustin Albino, Frontstretch: How did this opportunity come together to compete for Richard Childress Racing at Daytona?

Bamber: It’s come together after a very long time. I met Richard back in 2007, so I’ve known him for about 13 years. I’ve always had the desire of trying to get into a road course race at the beginning, to see what NASCAR is like and give it a go. From [Europe], not many people go over to NASCAR and give it a go.

There was an opportunity; it was either 2016 or ’18, but there was an opportunity that didn’t work out because I had some commitments with Porsche. After so many years of trying, it’s finally come together. I’m super excited, and I think everyone at RCR is also excited to finally have a go at it.

Albino: Where did you originally meet Richard?

Bamber: Richard came hunting years ago. I’ve known him from that background, and I actually came out and spent about a month with him, Austin [Dillon] and Ty [Dillon] when I was 17, and we went around Bristol [Motor Speedway], Watkins Glen [International] and dirt racing as well. So, I’ve known those guys since back then.

Albino: You stated you’ve always wanted to compete in NASCAR, so what’s it mean to finally get to do that this weekend?

Bamber: For me, it’s massive. It’s always been a dream; I watched it as a kid growing up. Obviously, then followed it closely after my first interaction with it in 2007 with Richard Childress Racing, watching Kevin Harvick and Clint Bowyer, all of those guys racing. I remember going to the drivers meeting as well, so I was hooked from there.

It’s a special moment. It’s something that not many people crossover into, and it’s a bit of a step into the unknown. Just very proud to be able to do it and just as proud to do with such an establishment as well. Normally, people don’t get the chance to get into such great equipment right away, so I’m really looking forward to it from that standpoint.

It’s a shame we don’t have fans fully down there for the whole NASCAR weekend. It’s great NASCAR has managed to get us on the track, and I can’t wait to roll off onto the road course as well, because it’s a track no one else has been to except one or two of the guys. That’s going to be interesting for everyone to watch on TV.

Albino: You’ve competed on the Daytona road course seven times in the WeatherTech Sports Car Championship Series. How much of an advantage do you feel like you have on the competition, given your experience?

Bamber: I think it’s definitely an advantage, but I haven’t been in that [Xfinity] car. I think it’s a little bit of give and take, but I love it. I think what NASCAR has done with no practice and no qualifying is really good. It’s really made everyone up their game. To roll off into the first corner not knowing what you’ve got, not knowing the grip, is exciting for the drivers, exciting for the crew chief to try and work out the setup so it gets better. I think it’s better for the fans because people make mistakes, it’s not clinically worked out because everyone has practiced so much. I think it’s been a really cool season so far, and you’ve seen some mixed results. I think it’s going to be the same at Daytona.

I met Ross Chastain for the first time at the shop the other day, and I said, ‘When I go into [Turn] 1, just stay away from me. Give me a moment to work out the car and what’s going on when I roll down in there.’

Albino: What have you done to prepare for the Daytona road course?

Bamber: We’ve been going flat out in the simulator basically, just trying to work out what it’s like to drive one of these things. The car has been built for quite a while already; got a seat fitted to me and everything like that. Just off simulator work, I’ve been working a lot with Andy Street [crew chief], he’s been really nice and helping me.

Now, it’s getting down to the rules and all that sort of stuff. This week I’ll be on the simulator preparing and going over all the details and thinking about what our gameplan is like. It’s going to be a real interesting one.

Albino: Who do you look at as your biggest competition?

Bamber: To be honest, I never really look at the other cars, because it’s not going to affect the way we perform, worrying about them. Obviously, it was a great race between AJ [Allmendinger], Austin [Cindric] and [Chase] Briscoe at Indy [Indianapolis Motor Speedway road course] on that last lap, they were three-wide. They are some really accomplished drivers and know the car well.

I think, for me, the first two stages are just about learning the car, learning the tires and learning how to race one of these things. We’ll give it a good nudge in stage 3 and see if we can go up there and have a fight with them, because they’ll have an advantage at the beginning since they know the car.

Albino: How much of the jump to NASCAR depended on the equipment you could get in?

Bamber: To be honest, it was always a goal of mine to drive for RCR. I’ve had a long association with them, and I always want to get into good equipment because you can be as good as you want to be as a driver, but you also need good equipment to be at the front. That’s super important, and my answer has always been, if you’re going to go do it, you might as well do it properly.

Albino: This might be a better question for after the race, but how does a NASCAR racecar compare to what you’ve driven in the past?

Bamber: I’ve driven everything in the past. I’ve driven street cars, Trans-Am, I’ve driven a lot of different stuff. Everyone says that they are super slow and super heavy, but if you look at some of the lap times they produce and the engineering that’s involved with every team, it’s got some great stuff in it. People that are engineering these cars are really smart.

I’m predicting it’s going to be a similar pace to a Porsche Cup car when I look at the lap times and compare Road America. But then they go to a place like Mid-Ohio [Sports Car Course], and they are four, five seconds slower than the GTLM car that we drive. It must do some things really good, but the biggest thing I’ve heard is it doesn’t brake well. I don’t think it’s going to be as bad as what some people described, and to be honest, I love cars that are heavy and have lots of power. Even in the simulator it’s nice, because you’ve got to get through the gears, you’ve got to lift, you’ve got to watch the wheel hop. And there’s so much stuff the driver can influence, it’s nice to have that going on again rather than just pedals and most of it is done for you.

Albino: You’re running full-time in the WeatherTech Series this season, four top-five finishes in the GTLM division. How would you say the first four races of the year have gone?

Bamber: The opening part has been brutal. We’ve had three podiums in a row, we were in contention to win every race, but something little would always go wrong which was a bit of a shame. At Road America we were leading by 20 seconds and got caught by the rain with some miscommunication from the pits.

We’re still second in the championship on our car, but we feel like we should be leading. We’ve got a good enough car, good equipment, just had nothing role our way. You need a little bit of luck in racing, so we’re hoping we can roll off at VIR [Virginia International Raceway] and have a little bit of luck and things go our way.

Albino: You’re from New Zealand and currently live in Malaysia. Have you been traveling back and forth since the WeatherTech series began?

No, I’m staying here. I’ve been here since June and I’ve been traveling everywhere. We’ve gone racing in Florida, I’ve spent quite a bit of time up in North Carolina and I’ve also been to Montana and now I’m down in Austin, Texas. I’ve been all over the place.

Albino: What is your goal for Daytona in the Xfinity Series?

Bamber: I think the goal is to try and win. The [No.] 21 car has had [four] top fives this year and quite a few top 10s, but expects to win. I know Richard is dying to win races at the moment, he’s certainly motivated. We want to try and go out and win, but a top three would be awesome.

Albino: If all goes well, would you like to give NASCAR another try, possibly on an oval?

Bamber: Yes, definitely. I would love to give an oval a try, just because it fascinates me with what they do and the skill level those guys have got. As a racecar driver, you want to test yourself against the best in the world at different disciplines. I’ve done GT, I’ve done Pro-Type Racing, some single-seater racing, but that oval thing is a different world, and the guys are the best in the world at it. So, I’d love to give it a go, learn it and see what it’s like. I would love to do the Daytona 500 one day, and I would love to do Bristol.